LIFTOFF, a new TV pilot that is the 2020 recipient of the Sloan-Film Independent Episodic Grant, is based on the true story of America’s first six women astronauts. Inaugurated into Astronaut Group 8 in 1978, calling themselves “The Fucking New Guys,” this group included Sally Ride, the first woman in space; Anna Fisher, the first mother in space; and Judy Resnik, the first Jewish-American in space who dies in the Space Shuttle Challenger explosion in 1986. We spoke with writer Katherine Ruppe about the story of these women and the development of LIFTOFF.

Science & Film: What is LIFTOFF about, and why did you want to tell this story?

Katherine Ruppe: I was drawn to the idea because of my ten-year-old daughter who has a love of space and science. We had taken a tour of NASA’s Jet Propulsion Lab and she got very excited about one day building the rovers that explore Mars, but I know that a lot of girls lose their love of science as they get older partly because they have so few female role models. I’m a big proponent of: if you can see it, you can be it! I came across the story of this group that included the first female astronauts and the first African American and Asian-American astronauts. In 1978 the astronaut class was opened to mission specialists who were not pilots, so it was the first time a lot of scientists got involved.

Most people know about Sally Ride, who was in this group, but there were five others in her same class. What was so interesting was that first of all, they had to blast through the chauvinistic brotherhood of space flight. Where they were working at Johnson Space Center there were 4,000 men and maybe a handful of women. Also in Sally Ride’s class was Judy Resnik who became the first Jewish-American in space—she was an engineer. The first woman to walk in space was in this group: Kathryn Sullivan, who was a geophysicist and oceanographer. There was also the first mother in space: Anna Fisher. She was an ER doctor. I’d never heard of any of these other women and thought, this story really needs to be told. 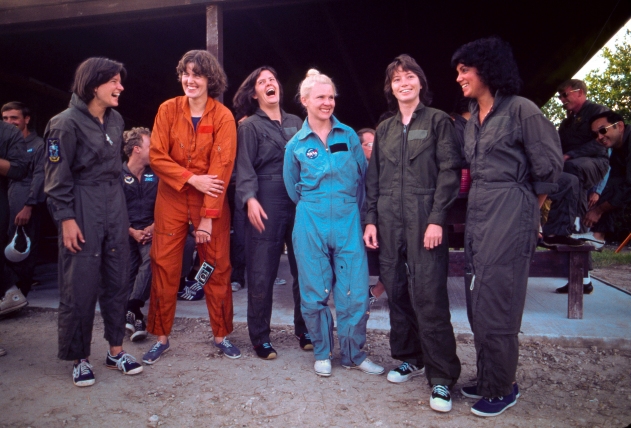 It was a great astronaut class. They nicknamed themselves “The Fucking New Guys.”There were 35 of them in the class, a mixture of military pilots and scientists who became mission specialists. These women had to prove themselves every day. Anna Fisher had her baby on a Friday and started intensive mission training that Monday—she didn’t dare take maternity leave because she had to prove that she could do the job and have a baby.

S&F: How do you think this will work as an episodic series?

KR: I think it will make a good series partly because we’ll be able to get behind these characters. They all had such interesting stories and challenges which still have relevance, like trying to have a family and blast to outer space. Anna Fisher got criticized by the public for leaving her baby to go to space and of course none of the men had to deal with that. I love the contemporary challenges that we also saw back then, and vice versa. I also decided, as I did more research, to compare it to later when the 1986 Challenger explosion occurred. That was obviously an extremely tragic event, so I intercut the story of these first women passing huge tests to get into the official astronaut program with the story of the repercussions of the Challenger disaster because it claimed the life of one of these first women: Judy Resnik. It spurred Sally Ride and the surviving women to push for safety reform at NASA, making it safer for all astronauts to fly.

READ MORE: The Science Advisor on Netflix's AWAY

S&F: Did you speak with any of the surviving women as part of your research?

KR: Four out of the six women are still alive and I spoke with one of them, Anna Fisher. I did a lot of research in newspaper and magazine articles. The astronauts also have oral histories on the NASA website.

S&F: In terms of how LIFTOFF might compare to depictions we’ve seen on screen, AWAY comes to mind as a recent depiction of a space mission that addresses some of the issues you’re interested in, but it’s a purely fictional account. What did you think of the show?

KR: I loved AWAY and was actually lucky to get to shadow in the writer’s room for a week as part of the Film Independent Episodic Lab. It was amazing to get to know those writers and I loved the show. It’s interesting that AWAY is a contemporary story but deals with a lot of the same issues my first six women were dealing with in the late 1970s. I also thought it did a great job of showing the dedication that these astronauts have, and their complete enthusiasm to explore the universe. I also loved how they show the “overview effect” and how, once you’re in space and see Earth, it’s just one big planet with no borders or boundaries between people. I feel like that’s a very good lesson for us all today that unites our world. As I’ve been working on the project, I’ve found that space really is the great equalizer and it’s Earth that has issues [laughs].

S&F: Where is LIFTOFF now in terms of development?

KR: I just recently finished the FIND Lab which was sponsored by Netflix. It was an amazing experience, we got to pitch to a lot of industry people including many Netflix TV executives. Subsequently, one of those producers has become interested in the project. We’re looking to attach some elements to make it even more viable for the market. I also had some very insightful notes from my creative advisor during the Lab so I’ll be working a rewrite. I’m going to be getting some science advisors through the Lab as well. I’m hoping to get some women astronauts involved and possibly some of the NASA historians.