AWAY From Earth: Interview With Producer Jeff Rafner By Sonia Shechet Epstein | September 22, 2020

Netflix’s new series AWAY stars Hilary Swank as Emma Green, commander of a collaborative, international mission to land the first people on Mars. Producer Jeff Rafner (GREY’S ANATOMY) was one of the first people to join the show’s team, in January 2019. With AWAY premiering on Netflix on September 4, we reached out to him to discuss the making of the show and their collaboration with NASA. This interview has been edited and condensed for clarity.

Science & Film: How did you involve consultants such as NASA astronaut Mike Massimino and NASA Mutimedia Liason Bert Ulrich in AWAY?

Jeff Rafner: I set up to do a weeklong actor bootcamp prior to shooting AWAY. We had Mike come in and talk about how to be an astronaut and then we started training [the actors] on all the wires and zero gravity stuff on the show. The night before we did this, we took Mike out to dinner and he was just as fascinated about movie stories as we were about astronaut stories. Mike is a born storyteller.

We needed someone who could verify that everything in the script, the experiences, were real. Mike was the astronaut who went out and fixed the Hubble Telescope. He trained down on Earth and had a specific wrench that was supposed to work for the bolts, and he got out there and the wrench didn’t fit so he used it as a hammer to get the bolt to open up. Astronauts are scrappy and they have to call from their experiences. I think understanding that really helped our actors.

Bert was really great in helping our actors get access to places and answers to questions they had. We had phone calls with guys who told us about the actual theory of harvesting ice in space. All of these elements we put together to make AWAY more credible. 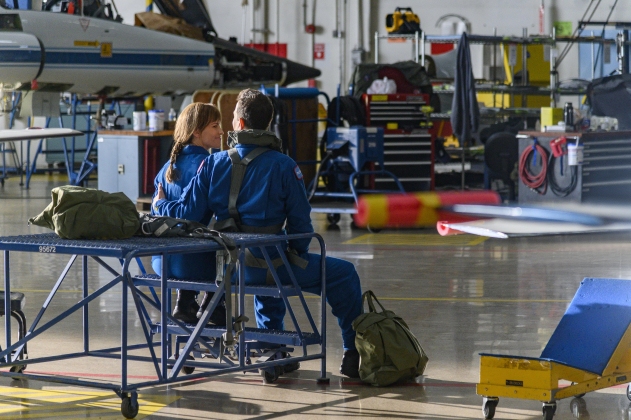 Hilary Swank and Josh Charles in AWAY. Credit: Robert Markowitz/Netflix © 2020

Bert is a great guy and he and I hit it off really well—even though I’m not working on a real NASA show, we’ve still been in touch. He was instrumental in helping us put together Episode 7 [which was filmed at NASA]. We were able to shoot in hangers and with T-38s that just aren’t around. We are one of the few shows that’s been able to go in and shoot what’s in our script.

S&F: I’ve seen a lot of space shows that run the gamut from trying to be super accurate to being completely speculative. For you as a producer, why was it important to imbue the show with those true-to-life scenarios?

JF: It leant itself to the story. I always say that the show is set tomorrow, but I read a review that said that it’s set “in a parallel history that could be today if…” It’s today if the Apollo system had continued and the desire for [going to space] hadn’t fallen out of favor. I heard a story about a former NASA director who was talking about travelling to Mars and the fact that in the current setup it’s highly unlikely that the U.S. will be the first ones to get there because NASA runs at the whim of the President. I keep going back to JFK seeing the bigger picture and saying, let’s push ourselves to make this happen, it may not help each country but it’ll help the world. 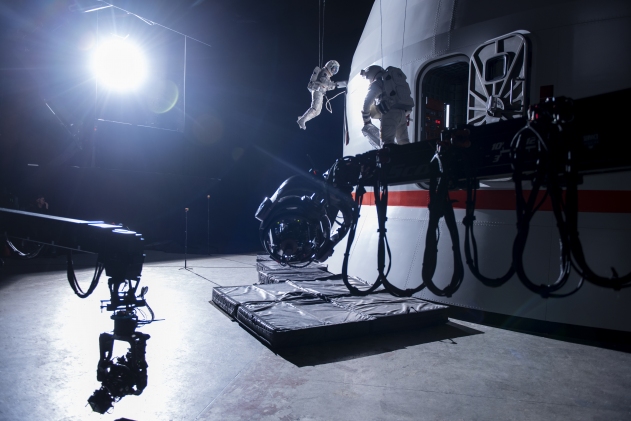 Behind the scenes of AWAY. Credit: Diyah Pera/Netflix © 2020

I also think the scriptwriting was rather prophetic because of isolation. Right now I’m in Vancouver doing a show, thousands of miles away from my family who can’t come visit, who I talk to on video, and other than the fact that I’m not in a spaceship, it’s a similar story. I think there are a lot of people in the world who feel that similarity.

S&F: Has working on AWAY made you want to continue with films or shows set in space?

JF: I seem to be the sci-fi guy. I went right from AWAY to a sci-fi pilot LA BREA that we started before pandemic. Now, I’m on a show called DEBRIS which is another sci-fi show for Legendary Television for NBC. DEBRIS is kind of X-FILES meets MEN IN BLACK; it’s the search for debris from an alien spaceship that lands on Earth and a secret organization that looks to find these pieces which each have a different effect on humans. That’s going to be on next year.

S&F: Why did you want to work on AWAY in the first place?

JF: My father directed the nightly news in Los Angeles and I remember him going on all the Apollo remotes they would send to Houston—my mother still has a collection of Apollo press badges. I never pursued being an astronaut but it was always a dream. So it was a great fit because it was something that was so interesting and I had so much knowledge of. It was always a peripheral part of my life and this experience brought it all together.

JF: It’s so multidimensional. That “away” is what it’s like for the daughter to have mom away, what it’s like for dad, and all the astronauts. We constantly readdress that through the ten episodes. The show is based on an article from Esquire, which is a fascinating article and a great launching point for telling this kind of story. We also had this amazing pedigree, with the people involved in FRIDAY NIGHT LIGHTS and that personal storytelling told against something that is familiar.