Living Life on Mars: The Martian By Anthony Kaufman | September 29, 2015

Based on Andy Weir’s 2011 novel, The Martian, the new Ridley Scott film starring Matt Damon as an astronaut castaway on the Red Planet relies on meticulous research. Weir spent years exploring the feasibility of Martian travel as well as the scientific and technical skills his botanist-engineering hero would need to survive. Ridley Scott and his team worked directly with NASA and astronautic experts to make the details of the film ring true. But as much as the creative teams involved in The Martian tried to stay true to real science, the movie remains decidedly science fiction, imagining scenarios that still remain far outside the capabilities of current space exploration technologies.

Sloan Science and Film spoke with Sydney Do, the lead researcher in space habitation and life support within the Strategic Engineering Research Group at MIT, about the challenges of Martian space travel and subsistence. A graduate of the University of Sydney’s Aerospace Engineering program and MIT’s Aeronautics and Astronautics program, his past research has been in the areas of fuel-efficient satellite formation flight, land-landings of NASA’s Orion spacecraft, and the crowdsourcing of engineering ideation and innovation.

Sloan Science and Film: Can you talk about your research?

Sydney Do: We draw up large-scale models to simulate future space mission scenarios. Through doing that, we identify technologies that need to be developed, and we run scenarios where if something breaks down, we see how the system responds to that, and figure out contingencies and ways to mitigate the risks.

SSF: So what are the challenges of simply getting manned missions to Mars in the first place?

SD: Firstly, there’s radiation exposure in deep space. On earth, we’re protected by the earth’s magnetic field, which shields us from radiation that comes from deep space in the form of galactic cosmic rays. Those are basically pieces of stars from distant galaxies; after they’ve reached the end of their lives, they explode and spew into the universe. So those are heavily charged particles, which can alter our DNA and increase our risk of cancer. The other type of radiation comes from our sun. Our sun operates on an 11-year cycle, and during parts of that cycle, there is more activity on the sun—it basically emits large bursts of radiation. So these high periods of radiation can cause cancer, as well.

Second, there’s the large challenge of landing on Mars. You may be familiar with the Curiosity Rover landing, also known as the “Seven minutes of Terror.” That was landing something that had a mass of 900 kg. And for a manned trip to Mars, you’re going to land something that’s from 18,000 kg up to 40,000 kg. It’s really difficult to land things on the surface of Mars, because there’s a very thin atmosphere there. So you’ve got a lot of heating on your spacecraft as you enter the Martian atmosphere, and it’s not thick enough to use parachutes to slow down. Right now, using new capabilities, the best we can do is about 2,000 kg, so we still need to increase that by magnitudes to get things onto the surface.

The third point is life support. Right now, we have an International Space Station, which has been operating since 2001. Regular re-supply missions from the ground support that station, arriving about every 3 months with spare parts, water and food for the crew. When you go to Mars, total mission time is three years, back and forth. Getting to Mars alone is a 9-month journey. So you need your systems operating reliably on the vehicle that takes you to Mars. And when you’re on the surface, you’ll be there for about 500 days, and you’ll have another vehicle with its own life support system. And that needs to operate reliably for that period time. And the same vehicle that took you to Mars, which has been switched off for the time you were on Mars, needs to operate reliably to take you back to earth. We haven’t accomplished these levels of reliability yet.

SSF: What about survival on the planet once we’ve gotten there. What about the Habs, or habitats, and growing a sustainable food source?

SD: Growing a sustainable food source is a very resource intensive project. A lot of studies have found that for initial missions or even for longer missions, ten years or longer, it makes more sense to bring the food from earth rather than growing it on the surface of Mars. You can definitely grow food experimentally in small batches which is what they do now on the International Space Station, but that’s about the size of a piece of a paper. If you’re asking how much is required to sustain people, there are estimates that at the very minimum, you need about 50 square meters of area per person, and that’s a very limited crop profile. On Earth, the global average is about 1,700 square meters to feed one person. It takes a lot of effort and area, and then you need a lot of lighting. So the amount of solar light that gets to Mars has to go that much farther than on Earth. And you also have dust storms on Mars that can last for several months at a time. So most concepts for growing crops involve having a greenhouse running on hydroponics. And that amount of lighting requires a lot of energy, which requires a large power system. And then you require a lot of water. If you bring it along, it would be prohibitively expensive because of how heavy it is. Or you would have to find ways to extract it from local resources, but Mars is a very cold, arid environment—with temperatures of minus 70 degrees—so you’d have to invest a lot of energy to heat up that water to extract it from the soil.

SSF: What about extracting oxygen from the Martian air. I understand this is being done, but are there limitations to that?

SD: Yes. NASA is sending a rover to Mars in 2020, and one of the experiments onboard is called MOXIE, which is using a process called oxide electrolysis to get the oxygen out of that CO2. So we’re doing this on a very small scale. We’ve never done it before and can’t say anything about it yet, but that’s something we see as having a lot of value. It may be able to be scaled up in the future, but it depends on what we discover in 2020.

SSF: Are there any other challenges in terms of getting water?

SD: In the 2008 Mars mission, they made a discovery that there were these chemicals called perchloratesin the Martian soil, and some of these were bound to water. And the concern is when humans are exposed to perchlorates they can get thyroid problems. Water ice deposits are considered potential sources of water, and there are definitely locations where this is the case, but we don’t know if it’s 100% water or if it’s mixed in with other chemicals or a high perchlorate concentration or hydrated minerals. So we need better data at how that water is present at the landing site. Next month, in fact, NASA is holding a forum in Houston to discuss where that future-landing site will be.

SSF: What is that ideal landing spot?

SD: In general, in the layout of your landing site, you have a few zones separated by some distance. So you want a pretty flat area for landing, up to 3km. Then you have your habitation zone. And then you have a zone for power, and that’s likely to be nuclear power, because of the large energy density required, so you’re not reliant on solar cycles, and can operate constantly. And if you’re using a nuclear power source, you want that at some distance from the Hab, usually within a crater, just like in The Martian. If you’re going to be doing exploration, you also have a zone astronauts can walk around and is not deemed a “special region” (where humans are not allowed to go to avoid contaminating the planet). 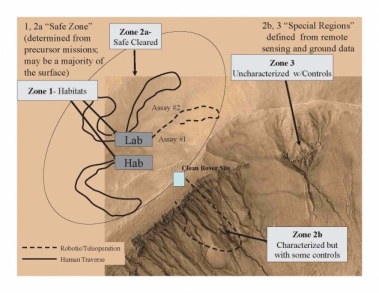 SSF: In the scenarios that you’ve been working on, is there anything that we haven’t discussed yet?

SD: We’ve done analyses on what it takes to operate or sustain Martian outposts. We look at surface habitats, where the crew gets switched out at every available launch availability, and what we find is that the spare parts requirements makes up the large portion of what needs to get sent up to Mars. Right now, it costs about $10,000 to put a pound of payload from the surface of earthto the International Space Station. To go from there onto Mars, it multiplies by another factor of 5 to 10. So you’re talking about very large costs just to send a pound of mass to Mars. So we need to figure out what mass of resupplied goods is required to sustain an outpost on the surface of Mars, and we find that spare parts are a very big driver. There are certain ideas that have been proposed to mitigate these costs. One idea is 3D printing. Where you would send the raw material from Earth, and if anything fails, you 3D print whatever fails. But 3D printing technology is not at the level yet where it would be able to 3D print the types of parts that you would need, such as particular bacterial filters or chemical reaction beds, where you need high precision components. Another option is redesigning your life support system altogether so smaller components can be replaced rather than a whole system.

SSF: What do you see as the biggest hurdle, financial or scientific, that we need to surmount to make a Martian mission possible?

SD: I would have to say that the technical challenges, while very difficult, can and will be overcome. I’d say the largest challenge is more political, which is related to NASA’s stability of funding. NASA’s funding is discretionary, so every line item has to be debated and approved by Congress every year. NASA doesn’t have autonomy in how it spends the money that is allocated to it. And this is where politics can come in and derail or delay programs. In this environment of uncertainty, it’s very difficult to develop and operate these large-scale missions, which have time scales of multiple decades. Developing Mars capability, you need a program that runs decades, but if the direction of your agency changes every 4-8 years, it’s very difficult to execute these missions and stay focused and on task.