The Science Advisor Behind Netflix’s Away By Sonia Shechet Epstein | September 17, 2020

Netflix’s new series AWAY stars Hilary Swank as Emma Green, commander of a collaborative, international effort to land the first people on Mars. The production team and actors consulted with NASA on both the writing and design of the show. We spoke with Bert Ulrich, of the Multimedia Division of NASA's Office of Communications at NASA Headquarters in Washington, about the process of working with the television crew.

The first season of AWAY premiered on September 4 on Netflix and is available to stream.

Science & Film: What was your involvement in AWAY?

Bert Ulrich: They came with the script about a year and a half ago and we were interested in participating. It was an easy collaboration. They shot one scene on site at NASA at Ellington Field at Johnson Space Center. We also connected them to some technical experts to talk about our programs. Initially, we were looking at incorporating some of our rockets [into the series], but they decided they wanted to get more fictional with it, which was fine. So, they created their own logo, although our logo does appear sometimes in the show, and we did some outreach with them as well, which you’ll know more about soon.

S&F: Why did you say yes to the collaboration?

BU: It was getting people thinking about going to the Moon and Mars which is really exciting, inspirational for sure. It’s important to have a woman in a lead role because that’s what we’re trying to do now at NASA; our aim is to land a woman on the moon by 2024, along with a man. Also, what it takes to become an astronaut, the true grit you need, is especially relevant today given the COVID situation and isolation—probably a lot of people can identify with it.

We generally like to be part of these inspirational series because it can share our message about the excitement of exploring space. It was also interesting because it was very much dealing with the personal issues astronauts have to go through. 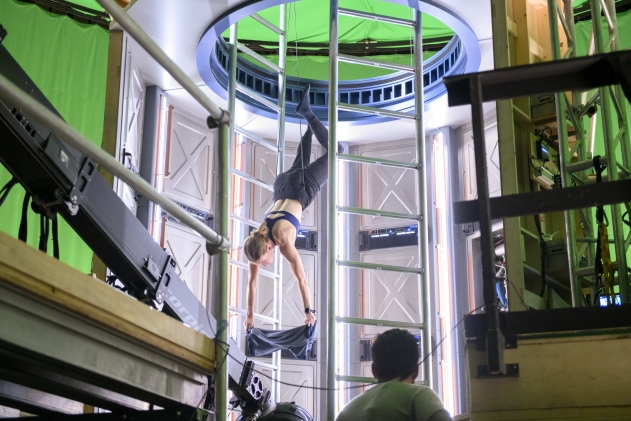 S&F: I remember early on in COVID a few astronauts wrote about what they’d learned about living in isolation from space.

BU: Yeah and coping with it. It’s a human experience to have to isolate and it’s not easy for anyone. A lot of these astronauts do it with such poise that you don’t notice that things are going on with family and the rest. We have psychological support to help them as they maneuver through that, which is portrayed in the series as well.

S&F: Who were the main people you worked with?

BU: Jeff Rafner, one of the producers, was our conduit to everything. He’s great.

S&F: What were the types of questions you were asked?

BU: The writers asked questions. They talked to people at the Johnson Space Center and interacted with people from the engineering and programming side as well as astronauts themselves. Josh Charles did a tour of Johnson to learn about what it was like to be an astronaut. Hilary Swank did one after the shoot because she wanted to learn more about it but didn’t have time initially.

AWAY is created by Andrew Hinderaker and stars Hilary Swank, Josh Charles, Vivian Wu, Mark Ivanir, Ato Essandoh, Ray Panthaki, and Talitha Bateman. Season one, consisting of ten episodes, is available to watch on Netflix. Check back on Science & Film next week for an interview with producer Jeff Rafner.