In competition at this year’s now cancelled SXSW, RED HEAVEN is a confessional-style documentary directed and produced by Katherine Gorringe and Lauren DeFilippo. The film was shot by the six participants of a NASA experiment while living in a 1,200 square foot space for one year in isolation. The goal of the experiment was to study how a group of people might live on Mars, including the effects of isolation; the crew, part of a project called HI-SEAS, lived at a former rock quarry in Hawaii. We spoke with the filmmakers about how they prepared the crew to film themselves, and what they learned about living in isolation—a subject pertinent to the COVID-19 pandemic when people around the world are coping with social distancing.

Science & Film: The film has an unexpected resonance with the current moment, don’t you think? What do you see as the similarities between the isolation that the subjects in the film deal with and what is happening in the world right now?

Katherine Gorringe: We’ve been thinking about that a lot because it does strike at the heart of the film. The film tries to explore isolation from your environment, the earth, the open air, as well as social isolation and being separated from a lot of the people you love. There is so much that we can go without, and humans are incredibly adaptable, but we really wanted to explore what makes humans human—as soon as we heard about the social distancing that’s happened we were like, this film is kind of an extreme case study of if we lock everyone up in their homes and only let people interact virtually.

Lauren DeFilippo: Katherine sent me an article yesterday that was in The [New York] Times about social distancing and the problems of loneliness in our society, and how social distancing is only exacerbating that. We know that for public health and public safety that we should be distancing ourselves, but what are the effects overall on us as humans when we try to do something like that? What are going to be the unintended consequences? For the characters in our film, they dealt with that for a year and it really was very difficult for them in terms of being cut off from their network of friends and family. They often just felt forgotten by people once they were in there for a certain amount of time. Their understanding of news was pretty different than what we’re experiencing now in that they would only get a certain batch of news sent from mission control or mission support that was a “curated” set of headlines; that really made them question what worlds they would be coming back to, and what sort of social changes would have happened. That all feels pertinent to now.

S&F: One of the things I found curious was how few moments of camaraderie there were amongst the group. It was something that I would’ve expected there to be some strategies to promote. Do either of you have any insight as to why that wasn’t a bigger part of their experience?

KG: They had a lot of group dinners and that was something they really clung to as a way to have camaraderie, togetherness, despite alone time being kind of a commodity once you get confined to a small space with five other people. We show how the dinners change, because at first, they’re having so much fun and there’s laughing, and there’s chatting, and they get to know each other. Then, we show a dinner later where everyone is just sitting at the table, eating in silence. We also try to show what happens between them with the EVAs [Extravehicular Activities, or spacewalks] where they had a lot of tasks as real astronauts would on Mars—they had to do geological research, which is why astronauts would be there. They’re going out, taking rock samples and doing all this research, but as you can see, two thirds of the crew really loved being outside and wanted to explore and the other two were like, bare minimum tasks, I’m never going outside otherwise, I want to be an astronaut and not cross any lines with NASA. So, even with the group activities there, they themselves created division amongst the crew.

LD: Yeah, I do think the EVAs were a group activity for the four that were getting along and was a release for them in terms of maintaining some semblance of sanity. It was definitely surprising to me that the other two just chose to isolate themselves further.

S&F: What sort of filming instructions did you give the crew?

LD: We had been in touch with the researchers leading the experiment and they were like, no filming allowed, this is a serious experiment. We were like, what if we just came and met the crew, and maybe we could figure something out with them. And they were like, okay, you can do that. So we flew to Hawaii, we spent two weeks with them as they were preparing to go into the dome into isolation, and during that time we came up with a plan that they would film themselves. We gave them cameras and said we would be in touch with them over email, because that was all we had. It was because the crew was willing to film themselves that we were able to make the film. One character, Shana, had a little bit of background in journalism and experience with a camera, but it was pretty limited, so it was a little bit of trial and error where we would send them different shot lists and requests, and they would send us footage. At first it was very brief, they would send us these three-second clips and we would be like, no, put down the camera on a tripod and just let it roll. Over the course of time the shooting improved, and they all started using the camera more and more to express themselves. Initially it was Shana doing most of the filming, and then, I think, as things got more tense, they were able to turn to the camera. In a way, I think it was a therapeutic thing for them, for everyone to be able to explain how they were feeling inside and their “side” of the story.

Most of that footage they just gave to us on a drive when they came out of the dome. They had been emailing some of it, but the bulk came to us after. 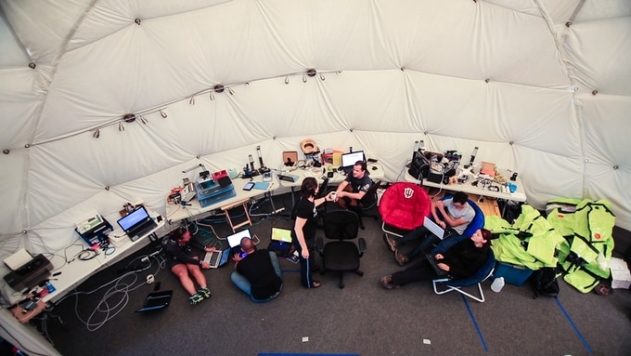 KG: We definitely found this film in the edit. We’ve been saying that we basically made a found footage film that we never found—we participated in the creation of it. Once we got back all the footage, it was just this process of watching everything and looking at how the story of all six of them went, what their stories were individually, and just trying to find those special moments in the footage that spoke to how it felt to be in there.

What was driving us the whole time was [that] we wanted to have this progression of mood and feeling and emotion. [We were] trying to find the moments that expressed how much pressure they were under when it got to nine months in, how much stress they were feeling, and then that alleviation of it when they step out of the dome.

We originally wanted to have outside interviews; we were interested in Mars exploration and the history of that, and human beings and the way that we look at Mars and project our hopes and dreams about the future. So we did all these amazing interviews with Mary Roach and Kim Stanley Robinson and this amazing astronomer Lucianne Walkowicz. But as we kept going in the process, and kept watching more of this amazing footage from inside the habitat, we just kept paring it down and taking out archival, and taking out outside interviews, until we were basically left with only dome footage, and these little moments from the Ernest Shackleton expedition. It’s a testament to how special this footage was, and how our crew captured their lives, that we ended up being [like], this is the entire film.

S&F: In what ways did this experiment contribute to a future mission to Mars?

LD: The HI-SEAS Project just got a final round of funding from NASA. That round of funding from NASA was for finishing research, crunching the data, so that’s what they’re working on now. They collected data on so many different things, and so they’re writing many different papers right now, and some of the early ones have been published, and then a lot of the other data is going to come out over the next year or two. So then all of those findings are available to NASA as NASA prepares for a real human mission.

RED HEAVEN is directed and produced by Lauren DeFilippo and Katherine Gorringe, and was filmed by David Alvarado and the Hi-Seas Crew IV: Tristan Bassingthwaighte, Sheyna Gifford, Christiane Heinicke, Carmel Johnston, Andrzej Stewart, and Cyprien Verseux. The film’s next festival premiere will be at CPH: DOX, which has moved some of its program into an online forum in lieu of having the festival in person from March 18 to 29.