Director and producer Elaine McMillion Sheldon sets her documentary KING COAL, which made its world premiere in the 2023 Sundance NEXT competition, in Central Appalachia where she is from. She takes a poetic approach, rooted in the culture of Appalachia, to documenting the past, present, and possible future of a place that has been ruled, ruined, and largely defined by the coal industry. We spoke with Sheldon from Sundance about the film’s storytelling and production.

Science & Film: Could you talk about how you arrived at the figure of “King Coal” who is woven through the film?

Elaine McMillion Sheldon: It took a really long time to find that. It wasn’t until the month before picture lock that I became the [film’s] narrator. Once I accepted that, then the film could invoke this ghost within the context of personal history. One time, I was visiting my mom—my dad was a miner, my brother still mines coal today, so mining was a big part of my family and their source of income—and I hadn’t told my parents a whole lot about this movie because it’s very sensitive. But I said to my mom, I know King Coal is not real, but you know what I mean when I say King Coal, so what is he? My mom said the line that ended up in the film: “He’s not alive like he was, but I guess he’s not dead either, I guess you could say he’s a ghost.” I wrote it down and it solved the problem of this person of King Coal who is a mythical force. When King Coal is a ghost, we can start talking about this invisible force, whereas when he's alive we can only point to industry and politics, and when he’s dead, what’s it matter? There is also idea of why a ghost haunts you—there is unsettled business. The region has not grieved in the way that we should and need to in order to move forward.

It took years to figure out who King Coal was and where he was, and what it even meant for us to say he’s a king. It took lots of research into actual kings—how they demand respect, loyalty, and even when their power wains people still have to believe. I remember when the Queen died, I was following Twitter threads about how people were grieving, and that really influenced me. You saw everyone saying she was this force, a symbol, and what it meant, that it was a comfort in some way. So, King Coal is not real, but the stakes are very real, and it was an entry into being able to have a deeper, harder conversation into a reality that often just seen as political.

S&F: This is a very personal story. How much were you thinking about who was going to end up seeing the film during the process of making it?

EMS: It’s a difficult conversation to have locally, and I wanted to be sensitive to not close off the very audience that needs to be brought in from that region. But I really made this film for my son. I grew up in the coal fields and it’s not a place where art exists, but imagination and stories and ballads and songs and folklore exists. That’s what this film is really made from; fragments of storytelling deeply rooted in mountain culture. The final lines are: “if you’re seeing this, hearing this, know this place is not a dream.” I’m trying to give permission to people—the same permission I gave myself to make this film—that it is okay to approach this very dark subject with creativity and imagination, and it might actually be the only life-saving thing we can do. At one time, it was someone’s dream that we would have a king and that he would provide and keep people fed and happy. That dream has run its course, so it’s up to us to figure out what the next dream is.

I featured certain places in this film because I don’t know if they’ll always be around and I want my son to hold those places dear and hold those people dear, like my own grandpa. At one point I wrote the film’s narration in a letter to my son, and parts of that stayed. While I was making KING COAL, I was just trying to take the burden off of people who feel overwhelmed by this insurmountable change that’s been going on for decades, that they haven’t looked at in the face because it’s so painful, and to give them the opportunity to grieve.

Ultimately, I’m here at Sundance where the majority of people haven’t been to the coalfields, and that’s a spectacular opportunity for me to transport people through these visceral images, sound, breath art, music, choreography… I wasn’t interested in teaching people anything; I just wanted them to see this place maybe in a way they hadn’t before.

S&F: I feel like the film holds that space for both romanticism and reality very tenderly. I’m curious about the production, and the style of KING COAL, which is a both verité and somewhat staged. How did it come together?

EMS: In my previous films the production has been based around following people doing things, and this film was trying to capture the feeling of a place without people. So, it began by documenting coal culture: coal education, coal science fair, coal 5k. Without any context though, you’re just going to gawk, and the subtext was being lost in the verité observation. Then came these invocations of nature and life. Before coal was really king, the writings about Appalachia are about the incredible hot springs and freshwater and unbelievable biodiversity of the mountains. As a child, I never learned that was our story at one time, I always thought it was coal and before that it was timber, because that’s what my family has always done. So that gave me hope to re-orient back to these things that have survived this incredible reign, and which hopefully we can recultivate as part of our identity. Mountain culture learned a lot from indigenous culture there—you learn to live with what you have and it’s not easy life.

The production then took this swing to making a wish-list of the places I wanted to invite people into in the region. And then, we realized we needed someone to be in these scenes because we wanted the interaction with nature. We went around dance studios in West Virginia looking for two girls to play the friends who would be in both coal world and this post-coal envisioning. Lanie and Gabby are both from coal-mining families. They weren’t given a script; they were just kids in the environment. I tried to take them to places so that when it gets really dark in their life and they want to leave that place, because it will, and I did, they will at least have something to hold onto so they can say, there is this beautiful place. No matter how dark it gets they have these moments to buoy them. Many of the places I took them I didn’t learn about until my 20s. Most of the people in West Virginia don’t go to the State Park.

We didn’t want to film a dichotomy of two worlds [coal and post-coal] because there is no getting out of that history, it’s in our lungs, in our bodies, in our water, and it’s going to be there. So the production became, how do you weave these worlds together? Maya Deren’s film AT LAND was a huge inspiration—I watched those scenes when she’s traveling through different landscapes over and over thinking about how Lanie was going to travel through different elements. We hired a choreographer to create a dance about these two worlds merging. 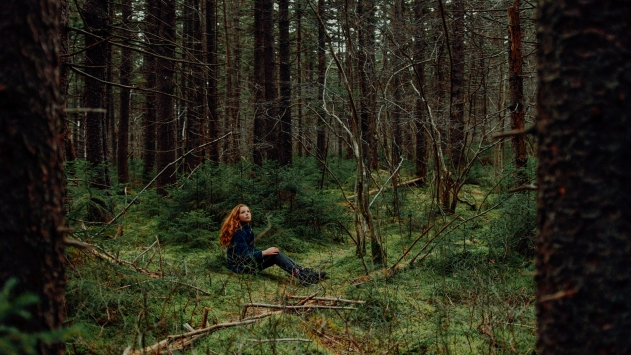 We didn’t have a clue what we were doing while we were shooting, we found this film in the edit, and it really only started making sense when it became personal. My editor Iva Radivojević
is a true genius and a deep thinker and spent the time to ground us in the coal and then allow us to escape.

S&F: Can you talk about the funeral scene?

EMS: Holding a funeral may be a strange thing for most people to think of when they think of a documentary, but death and dying is so much a part of the culture I’m from. My grandpa is a gravedigger, my mom does Comfort Committee where she makes food for people’s families who have people who have just passed away, so every time I call she tells me someone else is dead [laughs]. These burial rituals of tolling the bell, turning the mirrors, stopping the clocks… for such a radical idea, carrying King Coal up a hill [for a funeral], I thought it was even more radical to use the old-timers’ ways of doing things to call on the new. That was after Drexler Films came on and we had funding to do something big, but I’d never directed a scene with 80 participants. The production of that required an incredible crew. We rented this mountain as a location. What was so cool was that we had no clue what we were going to get. Luckily, the most incredible people showed up, and everyone took it super seriously. I realized in that moment that just as serious as it was for me, it was for them too; they needed a grieving moment. People were weeping, it was a real moment for them even though it was made for the film. Heather Hannah came and gave a speech, she hadn’t seen a single scene of the film, and she finished all my sentences in my narration. It gave me so much hope. It was a way that the film production lined up with real life. As orchestrated as that funeral scene was, it’s the most honest scene I’ve ever documented as a documentary filmmaker. I plan to release it as its own piece, hopefully in an exhibition format.

I should also credit Mark Cousins’s film I AM BELFAST, because he holds a funeral procession for The Last Bigot of Belfast, and when I saw that film, I was really pregnant and I was riding my stationary bike about to have a baby and was like, you can hold a funeral in a documentary?! I didn’t know this! I remember all along the production asking my producer Shane Boris: are we allowed to do this? I was breaking so many rules I had set for myself previously, but I’ve never made a more honest film.