The award-winning archival documentary FIRE OF LOVE tells the story of married volcanologists Katia and Maurice Krafft, who traveled around the world studying and classifying different types of volcanos, often using film as a research tool. It is narrated by Miranda July. FIRE OF LOVE made its world premiere at the 2022 Sundance Film Festival and will be released into theaters on July 6 by National Geographic Documentary Films and Neon. We spoke with director Sara Dosa at the Tribeca Film Festival about how she decided to tell the Krafft’s story, the challenges of the archive, and her approach to environmental subjects.

Science & Film: Why did you want to make a film about Katia and Maurice Kraffts?

Sara Dosa: I first learned about the Kraffts when we were working on my last film THE SEER AND THE UNSEEN, which Shane Boris also produced and Erin Casper also edited. We wanted archival footage of volcanos to help tell the story of how Iceland came to be—it is a volcanic island. We thought their visual material would do that nicely, but once we learned more about them as characters we thought there could be a beautiful film on our hands. Getting to know their philosophy, their playfulness, their idiosyncratic way of living was so inspiring to us. We wanted to dwell in their world. We also came across a sentence in one of the books that Maurice authored—both of [the Kraffts] wrote nearly 20 books. He wrote, “for me, Katia, and volcanos, it is a love story.” We thought, let’s use that as our inspiration, that’s our thesis for telling this love triangle.

There were many other twists and turns in the journey of coming to the film. For example, we were working on a completely different film and we were going to be shooting in Siberia in April 2020 but the world closed down due to the pandemic, so we decided to pivot and try to find an archival project. We were so lucky that we remembered this story and ended up getting access to the footage. But it was really [the Kraffts] as people that made us want to make the film. 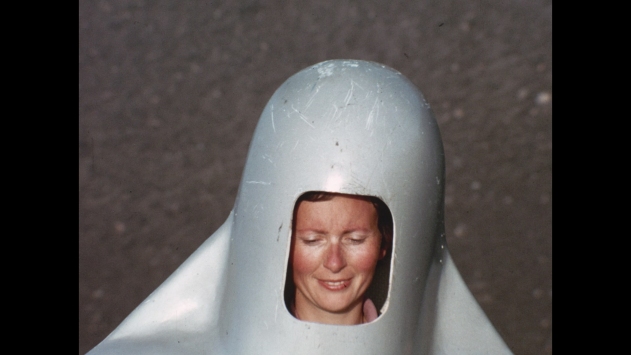 S&F: When you first looked at the footage, what was missing or what did you find that informed the direction you wanted to take with the story?

SD: First and foremost, we were guided by the Kraffts and the language they used about their own relationship as a volcanic love story. That did narrow some things down. There were 200 hours of their 16mm footage which was digitized through the tremendous work of Image’Est, an archival house in Nancy, France. Then there were about 50 hours of broadcasts and other documentaries that featured them. Having this thesis of a love story helped us shape the overall narrative structure as well as helped guide us towards specific visual imagery.

One of my producers, Shane Boris, and I did a writing retreat in October 2020 after reading a bunch of books about them and seeing some of their imagery. We created a map for the film based off of their adventures around the world and that followed this love triangle structure. Once we started watching the footage as it was digitized and sent to us, a lot of the imagery confirmed what we were after and some of it completely broke it apart. We really bumped up against the limitations of the footage. The archive is so spectacular in its imagery, but the 16mm footage didn’t have sync sound, so we were left trying to find ways to interpret the material. We did that through reading more books, interviewing people who knew, loved, and worked with the Kraffts. Then, the other bucket of footage—recordings of them—it was wonderful because we got to hear them, see them interact with each other, meet their public personas, but we were also dealing with limitations from those programs. We didn’t have the master, raw footage and so we had to work with the edited material. There was a fantastic interview with Katia and Maurice together, by far the longest and most in-depth one, but the way it was edited there would be a hard cut in the middle of a sentence. That is what led to some of the visual grammar that we used. For example, when we pause on certain moments in the film it’s because there is literally not a shot that follows, but we loved Katia’s expression, so if we just held the shot, we could hint at these limitations of the archive but also welcome our own creative ways of dealing with those limitations.

Those limitations also showed us the need for narration. We wanted to hear [the Krafft’s] voices first and foremost, we used as much as we could, but we needed more if we were going to tell a love story and show the nuances of their relationship as well as their psychology, philosophy, and their grappling with existentialism and how they made meaning out of these human lives which were in their eyes so fleeting.

S&F: How much of the Krafft’s scientific work was it important for you to weave throughout the film?

SD: We were trying to let their science guide us, but we did speak to other volcanologists for advice in understanding what an audience needed to know to make the film intelligible from a scientific perspective. It was a hard balance between providing enough scientific context as well as telling this love story. We found that if we had a significant amount of scientific information it felt a little congested. Something that was really useful for us is that their filmmaking was science, it was data. They were going to the rims of craters and remote locations and they were able to commit to posterity these fleeting phenomenon that they were then able to study time and time again—that’s something Katia says in the film. The more we worked with the footage we could see how these singular moments could go on for decades to teach scientists about the nature of volcanism.

We also wanted to draw some resonance between the process of scientific inquiry and the process of falling in love, which felt very true to their story. We have a line in the film where our narrator says: “understanding is love’s other name.” The more Katia and Maurice were trying to understand this unknowable force, they were falling in love with each other. As a creative team we talked about that wonderment that can happen when you’re exploring something that is beguiling, as well as what it feels like to find out the secrets from your new lover. Using that scientific inquiry as part of the love story felt true to them as characters.

S&F: Do you have any idea what cameras they were shooting on? Were these ready-made cameras or did they modify them to film in such high heat?

SD: I believe they had very specific rigs and setups that were heat-proof and helped them to set up more quickly. Katia would take a lot of time setting up her still photography shots and it was in that span of time that Maurice would run off [to film]. I would love to know more of the exact setups—that’s one on a long list of things I wish I could have asked them. 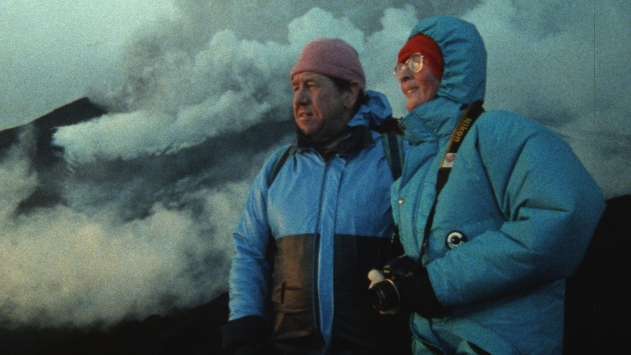 S&F: The first time I spoke with you, the final version of this film hadn’t been seen at all by a general audience. Since then, how has the reception been from the volcanology community?

SD: I’ve heard from volcanologists in the field and it has been wonderful to hear from people saying that we’ve captured that total enchantment with the planet. I have had some people also say that we’re showing the sacrifice that volcanologists make. For example, our film touches on the life of David Johnston who died at Mount St. Helens in 1980 and also Harry Glicken who died at Mount Unzen along with Katia and Maurice. They sacrificed their lives for the work that they did. We only briefly mention them, and I feel like there could be entire movies about each of them too. That’s something I hope our film will do for the volcanology community in general: this will be a starting point for larger conversations about what it means to live and die for science.

For me personally, now that the film is out in the world, I love thinking about how passionate Katia and Maurice were in sharing their imagery with audiences around the world. They travelled from country to country presenting their work in an effort for people to understand not just science but to fall in love with volcanoes. It feels like such a great honor that we’re now travelling to festivals, we are about to release in theaters, and that audiences will meet their imagery once again. It feels humbling to try to continue that legacy through our film. Bertrand Krafft, Maurice’s brother, the first time I spoke to him on the phone he told me: “Maurice and Katia must not be forgotten.” So, it feels especially meaningful to get to share their legacy with new generations after they made such a powerful imprint on generations growing up in the 70s and 80s in France.

S&F: Have you shown FIRE OF LOVE in France?

SD: Not yet, actually! We have our French premiere coming up at Cinema Paradiso at the Louvre on July 15. Bertrand, Maurice’s brother, is most likely going to join us. It’s going to be a powerful homecoming.

S&F: How has working with an archive impacted the way you are thinking about future projects? I know your past work was more observational.

SD: I feel so spoiled working with Katia and Maurice’s footage. I’ve never seen such spectacular and transcendent imagery. As a filmmaker in general, I always want to make films that explore the human relationship to non-human nature and to communicate a story of the sentience of nature, especially in a way that can counteract these violent narratives about the Earth as dead or a resource to capitalize on. Telling stories that show the interconnectivity, ecology, and life of the planet is what moves me as a filmmaker. Volcanoes do that to the highest degree. With my core creative team that I’ve worked on many projects, we’ve been brainstorming about what can communicate that feeling of transcendence. We’ve been circling around ideas of time, celestial stories, we’re not quite sure—we have a few ideas but there is certainly a lot in FIRE OF LOVE that has shown me what excites me most as a filmmaker.

The archive really ignited something in me, and same for Erin Casper and Jocelyne Chaput my editors. We had so much fun in the collage process. Of course, all non-fiction work is interpretive, but the collage-style nature of FIRE OF LOVE had a different dimension of a hermeneutical process than I’m used to when working with observational footage.

I feel like I got to know Katia and Maurice so well through the materiality of what they left behind: their footage, their writings, the memories that live on, and I so wish I could have met them as people! That’s a challenge for me in making archival films with people who have passed on, is that direct relationship to the people in the film. In my verité work, I feel like I co-create the films with the people in them. I do feel like FIRE OF LOVE is a co-creation of Katia and Maurice’s legacy and their archives. But I so wish I could have met them.