RUN is a new thriller on Hulu, from the team behind the hit movie SEARCHING, which is deeply chilling because of the way the story twists the presumed love and kindheartedness of the parent-child bond. Sarah Paulson (AMERICAN HORROR STORY) stars as Diane, a mother who gives birth to a premature baby, Chloe, who grows up with a host of serious illnesses that keep her homebound and needing routine care, even as she gets ready to go off to college. Chloe is played by Kiera Allen, who makes her debut in RUN, and who uses a wheelchair in real life as well as in the film. RUN is one of the first major studio films since the middle of the twentieth century to cast an actress in a wheelchair to play the part.

We spoke with writer and director Aneesh Chaganty and writer and producer Sev Ohanian about Allen’s casting and the production process, as well as about the medical and scientific themes RUN brings up. We first spoke with Chaganty and Ohanian in 2018 when SEARCHING won the Sloan Feature Film Prize at Sundance.

Science & Film: How did you decide upon which ailments Chloe’s character had?

Aneesh Chaganty: We chose the range of ailments very specifically. Originally, we had ten or eleven ailments we were thinking about while we were ideating and playing around with the story. I remember we did a pass [of the script] where it didn’t feel like she had enough ailments; our whole idea of this character was somebody who has been sick her whole life, so we needed to make sure we had enough actual sicknesses. We knew she uses a wheelchair but it’s way more than that: asthma, diabetes, arrythmia… We ended up doing passes of the script where we enjoyed the whole story, we liked the structure, and then we would do a pass for arrythmia and be like, where in the story is this factoring in? Then, we’d do a pass for diabetes and a pass for hemochromatosis. We’d try to add moments into the script where that sickness could take priority of the narrative. The ones that eventually felt like the right combo were the five we ended up with.

Sev Ohanian: As the recipient of the Sloan Sundance Award Prize [in 2018], we tried our best to make sure there was always an underlying logic to the maladies that Chloe could have. I remember we spent a long time researching if it was possible to develop asthma in life. Most of that information is nowhere to be found in the film, but I think the implication is, especially in the last half of movie where you get a peak of what’s really happening under the surface, you might see that there was a lot thought put in. 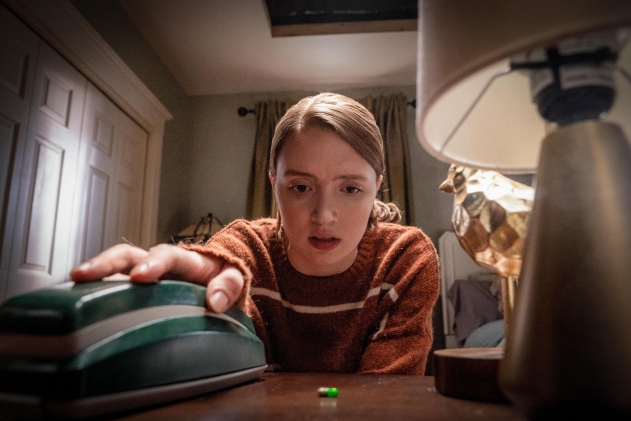 S&F: I noticed in the credits that you had medical consultants; how did you work with them?

AC: There is one in particular who we consulted with every draft. The others were on set while we were shooting anything that took place in a hospital to make sure that people’s jobs were not completely movie-ified. The person that we went to for literally every draft and every scientific element of the story was Austin Quinn. He is an ER doctor and is an extremely creative thinker. We would present to him what we wanted a medication or illness to accomplish in the story and he would often talk about how the mom would be able to afflict this. There is one complete piece of fiction from a medical standpoint in the movie: that is the central pill in the story. We ended up having to fictionalize that and make it an “it happens in this world” kind of thing. But everything aside that, from how Chloe got all the illnesses, to the liquid that mom is making, to what it’s going to do, we went to him for every draft as our resident expert.

There are two types of consultants: there are really smart ones, and really smart and creative ones. You have to have the later to really write something because the more you stick to, this is how life would be you end up not being able to write anything at all, especially for this more thrilling material.

S&F: An observation from having seen SEARCHING and RUN is that you do well integrating fact with drama and making the scientific parts central to the drama in some way that furthers the narrative.

AC: Totally. The most realistic way of someone paralyzing someone would not be isolating from waist down, it would be neck down, or through specific shots. But we thought, if you’re seeing your mom inject shots into you then there is no mystery there. We wouldn’t be able to squeeze the narrative tension out of it. A pill gives a lot more narrative questions.

SO: I’m remembering that Aneesh and I spoke to a lot of plastic surgeons about Botox because we learned that those injections could paralyze. For a moment, we flirted with the idea of Sarah Paulson’s character as a receptionist at a Botox clinic, but to Aneesh’s point, the pill is so much more symbolic. It’s iconic. 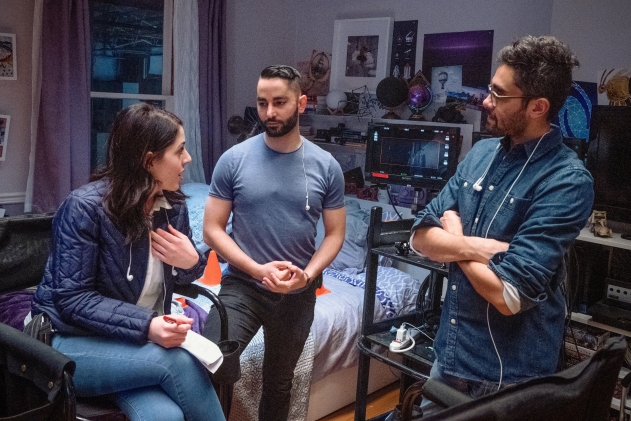 Sev Ohanian and Aneesh Chaganty on the set of RUN. Photo courtesy of Hulu.

S&F: The story is also one of someone in power abusing that power. Was that a theme that inspired you?

SO: Fundamentally, the movie is about dependency. At a very young age children are dependent on their parents and as they age, there is a natural tendency to seek independence. Neither Aneesh nor I are parents, but we all know the idea of the empty nest syndrome: wanting to see your kid grow up and spread their wings, but at the same time your need for that [relationship]. As Chloe gets to that age where she wants to be independent, she’s lucky that she has her mom. We introduced Chloe as a character that, while she has so many skills— she’s good with her hands, good with science, and with so many things—she has these medical conditions that require 24/7 attention. Luckily for her, her mom is there. We see her mom do her physical exercises, she homeschools her, but more than anything her mom is her cheerleader; she’s giving Chloe everything she needs so she can spread her wings and become independent. The movie is taking that central concept and perverting it, because ultimately what comes to be true is that the person Chloe looked at as being her sole caretaker, she starts to realize that situation is upside-down, and she may not have needed her mom had her mom not created the situation she exists in. That’s the kind of ballpark we were trying to play within.

S&F: Kiera Allen who plays Chloe uses a wheelchair in real life. There are however a lot of scenes in which she’s out of that wheelchair completing remarkable feats. How did you navigate that with her?

AC: Every year, we’d read articles talking about how no disabled actors are playing disabled roles, and we found out when the press started on RUN that it had been since World War II [that a disabled actor played a disabled role]. It was new to us because we hadn’t done this before, and it was also new to Hollywood I guess. It was certainly challenging, but at the same time that was the ask on Kiera’s part and she was totally game. We knew from the beginning, when she was auditioning, that this was going to be a very physical role. We were trying to make a disabled actor into an action star. We all thought that was a really cool mission statement because it hadn’t been done before, and if people saw that then it would be this cool subconscious mind-shift as to what is possible and what people are not envisioning because of the way we’ve been culturally siloed and our thoughts have been shaped. There was a lot of novelty in the production process. But honestly, from my perspective, it’s how you make a movie: you ask all these people with different expertise, what are the things you can and can’t do, what are your limitations? It just felt like another element of the movie. When we first gave the script to studios, they were like, there is no disabled actor who can actually do this. Our objective was to demystify what at the time we thought was a false belief that was proven to be so.

SO: Making any movie is hard. It’s almost always impossible. RUN was our first studio movie which comes with its benefits but also challenges, and it was also a relatively smaller budget film, so we had challenges going into it but I’m proud to say that the fact that we were working with a lead actress who uses a wheelchair was not one of the challenges. Early on, we knew that was what we were doing and every interview with every crewmember we were very clear when it came to that. My producing partner Natalie Qasabian especially took the charge on, making sure every aspect of our production was accessible. It just took the right amount of planning, but I can honestly tell you we spent a whole lot more hours having headaches about what we were going to eat on certain days of the production than we had to worry about accessibility—that was never a question.

S&F: How has the film been received from the disability community so far?

AC: We haven’t been reached out to by the asthmatic, diabetic, or heart arrythmia communities [laughs] but the disabled community in general has been very, very vocal about the movie—writers, journalists, the Twitter influencers, and most of it has been directed towards Kiera. The weight of this film is its casting. When people talk about this film beating the concept of ableism, sometimes you don’t think about that while writing, and those kinds of adoptions of what the movie is about have been awesome.

For Kiera to be in this movie is an accomplishment, and I would say that if this wasn’t our movie. It’s awesome that a studio as big as Lionsgate can put that much money into a movie that is led by an unknown person who comes from a community previously not thought of in Hollywood as capable enough to pull this off, and that in and of itself has given us a lot of positive reaction from the disabled community. It’s been very reassuring, and I think fulfilling to us to get those kinds of responses because at the end of the day that was one of the first priorities we had with this film, to do right by that.

S&F: Do you know what you’re working on next?

AC: The next film has less to do with medical conditions and more to do with a different social sphere. It’s something we’ve been working on since the edit of RUN, just as we were working on RUN during the edit of SEARCHING. This one is the next passion project which will be a heist thriller hopefully putting a twist onto a genre we’ve seen many times.

SO: We are flirting with a supporting character being somebody who works in or studies a particular science. But I’m very nervous to have a conversation with you in two years, Sonia, because we have to uphold our award from two years ago. Trust us, that pressure is going to follow us for the rest of our career.

RUN is written by Aneesh Chaganty and Sev Ohanian. It is directed by Chaganty and produced by Ohanian and Natalie Qasabian. Sarah Paulson and Kiera Allen star. The film is now available to watch on Hulu.