The Queens Drive-In, a partnership between Museum of the Moving Image, Rooftop Films, and the New York Hall of Science, opens tonight with the New York premiere of Michael Almereyda's TESLA, starring Ethan Hawke as the prolific inventor Nikola Tesla. The Drive-in is located on the grounds of the New York Hall of Science in Flushing Meadows Corona Park, and features a 60-foot screen with room for over 170 cars. Our Science on Screen series has programmed a number of films, including a double feature of RICK AND MORTY with BACK TO THE FUTURE.

We spoke with Almereyda in January at the Sundance premiere of TESLA about the making of the film and why he was drawn to the subject–that interview is republished below. Coinciding with TESLA's release, Museum of the Moving Image will be presenting a virtual cinema retrospective of Almereyda's 21st-century feature films, plus a selection of his rarely-seen short films. Almereyda is one of few filmmakers who has received multiple grants from the Alfred P. Sloan Foundation for feature films that depict scientific themes and characters. Three of his feature films to date, including TESLA, received Sloan grants. The other two, EXPERIMENTER and MARJORIE PRIME, will be included in the virtual cinema retrospective. "Michael Almereyda Here and Now" opens on August 21.

Science & Film: Tesla was a famously eclectic character–he supposedly had a pigeon who he loved, and so on. What did you tell Ethan Hawke about Tesla when you first discussed the film?

Michael Almereyda: I think he read some books actually. He’s got initiative. Tesla is sort of iconic and mysterious. The pigeon part of his life is the later part of his life—the film tracks about 15 years pre-pigeon. So, no pigeons were harmed in this movie, no pigeons were even in this movie. There’s a novel you might be familiar with that involves Tesla in later life with his pigeons, and Tesla wrote about his love of pigeons. But I wanted to focus on a different part of his life that was very specific and very eventful, even without that [romance].

S&F: How did you decide what part of his life you wanted to focus the film on?

MA: I belatedly looked at Tesla’s obituary in The New York Times. It’s fascinating to do that because it shows you how perceptions evolve, and how folklore and mythology evolve. When he died, he wasn’t a front-page figure. He was page 19. There was a photograph of a gaunt old man, and it was extensive, but it was: Nikola Tesla, prolific inventor, dies. It acknowledged what is abidingly true, which is that most of his great work was done in an astonishingly compressed amount of time: 15-20 years after he arrived in New York. After that, there was a lot of promise, possibility, press conferences, announcements, and…wishful thinking. The way that the wishful thinking has been interpreted is either defeated vision or insanity—it’s open to question. 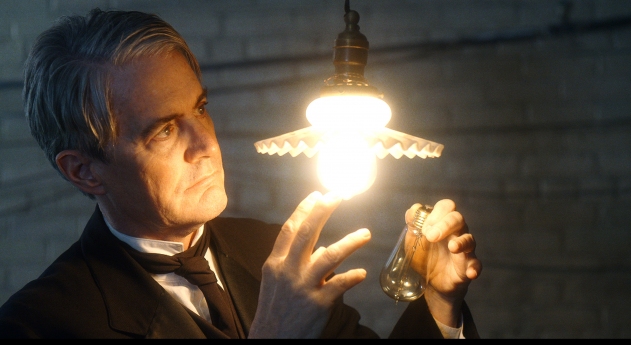 I wanted to deal with his accomplishments more than wishful thinking. He had a flood of activity for about 20 years, and it really is bridged by the turn of the century. By 1901 and 1902 he had a financial disaster that he never recovered from. I think it was also an emotional and psychological disaster. There are different versions of the script, I’ve been writing the script over time. I didn’t want to try and get prosthetics, or cast an old man, and… someone else can make the pigeon movie, let’s put it that way! That’s yet to be done, and I look forward to seeing it, but I didn’t want to direct that movie [laughs]. David Lynch had a Tesla project, lots of people had Tesla projects. Jim Jarmusch wanted Tilda Swinton to play Tesla. I got lucky with my TESLA, but I’m ready for others.

S&F: Visualizing the process of invention, what can be such an internal process, is difficult. How did you approach this in the film?

MA: Yeah. The movie doesn’t show him inventing things, pretty much. But there’s one movie I like about Hannah Arendt [Margarethe von Trotta’s HANNAH ARENDT] where it just shows her lying down, smoking a lot. That shows her thinking, and the power of her philosophical brain, expressed through plumes of cigarette smoke. And Ethan liked the idea of smoking—I later had to admit that Tesla didn’t smoke past a certain point—but that was one way I indulged him, and I think it’s fine. He smokes. It’s hard to embody thought, or express thought, and Ethan does a great job. But it’s more about attitude, the scenes aren’t about inventing, it is more about the consequences of inventing and how other figures and forces interact with the inventions. So the film is channeled through the voice, the viewpoint, of Anne Morgan. She bridges her father, who is a financial titan who backed Edison at first and also gave money to Tesla, and also was shaping the US economy in ways that remain indelible. Anne Morgan’s relationship with Tesla is not something I invented, but I did perhaps underline it a lot, and that was a way of bringing my understanding to the surface.

S&F: Is there anything that you read, or anyone that you talked to that helped you understand Tesla’s scientific contributions?

MA: I read this wonderful book that came out in 2015 called The Truth About Tesla, and it absorbed and acknowledged a lot of great writing about Tesla, but also delved deeper into looking at the patent laws, and at the history through the legal maneuvers that different forces took—different inventors and the people who backed them. It dissolved some of the hero-worship of Tesla, while strengthening my respect for him in other ways. It also clarifies a lot of the science that I’m not necessarily agile in understanding. It’s a great book, and I would recommend that book to anyone who really cares about Tesla because it’s not as well known. It’s beautifully illustrated, it’s also organized and expressed in a language that is refined. The first book I read as a teenager that started my fascination is called Prodigal Genius, so that fires you up in a different way [laughs]. And after a while that kind of thinking feels inadequate, it feels thin and superficial and like a comic book.

I think Tesla is one of those figures we can acknowledge as a genius. As much as that word gets devalued, I think he qualifies, and it would be foolish to try to thin that vocabulary out. But I was more interested over time in what was human about him, rather than what was superhuman. I hope this movie combines those appreciations.

S&F: Just from what I know about Tesla coils and electricity, but also the Wardenclyffe Tower, which was this amazing idea about free energy for all...

MA: This book [The Truth About Tesla] is great at recognizing that “free energy” was not an expression that Tesla came up with. He never described it as free energy. And part of my fascination came from a great comic book artist, a guy who within his own framework is called a genius, named Alex Toth. He’s a visual storyteller that I’ll always be learning from, and anyone who cares about narrative through pictures: he’s a brilliant man. But he was illustrating really stupid stories. Alex befriended me when I was a teenager and I would go over to his house and chain smoke—I guess that’s another reason I let Ethan smoke [laughs]—and he would talk about Nikola Tesla. That’s how I learned about Tesla, through Alex Toth. Toth was convinced, as many people are to this day, that Tesla’s visionary, utopian idea of free energy was thwarted by J.P. Morgan. This is a distortion. This is not what my movie will tell you. My movie, I hope, acknowledges ambiguities. Tesla was someone who lived in luxury hotels, had tailor-made clothes, ate at the supremely most expensive restaurants, and if he was really interested in this utopian ideal of free energy for all, he didn’t express it in ways that are trackable.

READ MORE: Back to the Future x Rick and Morty at the Queens Drive-In

He wanted to aid humanity. He had high-minded ideals, but he wasn’t very good at getting his hands dirty with people. He literally was afraid of touching people. In the obituary in The New York Times, it acknowledged that in his life in the hotel he demanded that no one get closer than three feet to him.
His ability to actualize ideas is so tantalizing because we want to imagine that his ideas about energy could be exemplary and fulfilled. But the book I mentioned cites that most scientists who are truly aware of his ideas and can understand them, or have tested or tried to duplicate them, would testify that, unfortunately, he was wrong. He was right about so many things, and we are living in the world that he helped invent. We are still living within a technological framework that he shaped, that he was an indispensable factor in. But he tried to overreach, his ideas spilled past that, into a realm that can be qualified as mysticism more than science.

S&F: Why do you think it’s taken a relatively long time for a feature about Tesla to be made?

MA: It’s not hard to understand it from a cruel or a crass perspective: Tesla didn’t have a single romantic relationship that’s acknowledged. Most movies hang themselves on that framework. So I kind of cheated by implying the possibility, because he did have a flirtation with Anne Morgan, I didn’t make that up. That’s part of the essence of who he is, and that’s part of what is sobering and sad about his story. Because I think that he didn’t take that risk. There was something within himself that he didn’t acknowledge. And that’s not scientific, that’s on a human level–he was cut off. I cite Henry James as an example of someone who wrote about that at length, and piercingly. There’s this music from Jane Campion’s movie, THE PORTRAIT OF A LADY, which I borrowed and weaved in as a reference to that. So that’s something you can look forward to. 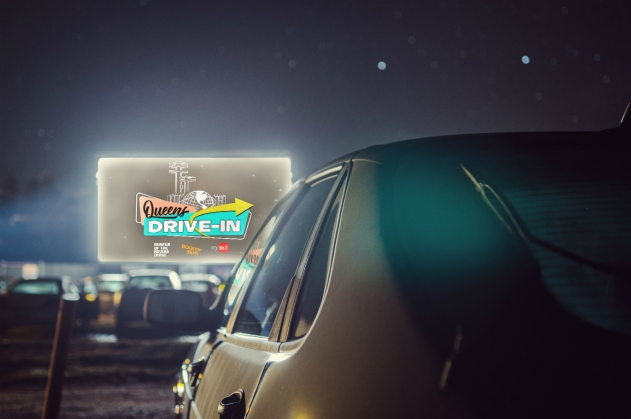 S&F: It’s interesting you say that about the romance, because there was a film student who got a Sloan grant to make a short film about Tesla, and even in ten minutes it has a romance which just underscores your point.

MA: They invented a romance?

MA: With a pigeon?

S&F: I do think human-nonhuman companionship is an interesting way of exploring love and attachment…

MA: All the big biopics that we know about, including A BEAUTIFUL MIND, they hang it on a relationship–someone to get them out of their head. Tesla didn’t get out of his head very much or very well. His head was all-encompassing, but I think it kind of imploded. The real truth, the real man: it’s kind of terrifying.