The new short film LUCY IN THE SKY is about a 14-year-old girl on the autism spectrum who is starting mainstream high school. Zoe Colletti stars as Lucy. Colletti is in Paul Dano’s new film WILDLIFE, and will star in Guillermo del Toro’s upcoming film SCARY STORIES TO TELL IN THE DARK. LUCY IN THE SKY also stars Academy Award-winner Whoopi Goldberg. Isabella Russo, who was in the original Broadway cast of SCHOOL OF ROCK, is also in the film. Russo will be in the new ABC pilot FOR LOVE.

LUCY IN THE SKY has just been nominated by the Casting Society of America for an Artios Award, which recognizes theater, television, and short films for their outstanding achievement in casting. The film is written by Jen Rudin, who is also its casting director. Sundance alumnus Bertha Bay-Sa Pan (FACE) directs. Rudin received a screenwriting award from the Sloan Foundation’s partnership with NYU in 2016 for a feature-length version of the script. 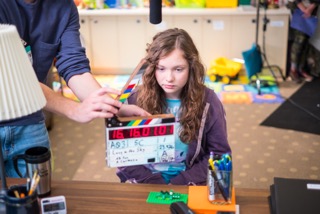 On October 18, the NYU Department of Child & Adolescent Psychiatry will present a special screening of LUCY IN THE SKY with the cast in person for a Q&A. In addition to Goldberg, Colletti, and Russo, the film stars Catherine Curtin (STRANGER THINGS), Danny Burstein (BOARDWALK EMPIRE), Kelly Hu (THE SCORPION KING), and Quinn McColgan (MILDRED PIERCE).

The film will eventually be available online on Sloan Science & Film along with over 50 short films that have received Sloan Foundation support.