Hyper Ecofarm starts slow: gamers are tasked with growing three grass fields on a square grid, floating in a blue-green background. Plant the seeds, wait for the grass to grow, harvest it. Then, the game picks up pace until gamers are feeding herbivorous fish water hyacinth and omnivore fish herbivore fish, and pigs both kinds of fish and rapidly trying to maintain this growing system from season to season. The game was designed by Shiyun “Vanilla” Liu with support from the Sloan Foundation through its partnership with NYU. Vanilla is a graduate of Communication University in China where she received a degree in game programming, and just completed the master’s in game design at NYU’s Game Center. She is the second person to ever be awarded NYU’s Sloan-supported Gaming Prize. Hyper Ecofarm is a click and play game farm simulation game that runs on HTML5 and is playable, but in development. Science & Film spoke with Vanilla by Skype.

Science & Film: How would you describe Hyper Ecofarm to non-gamers?

Vanilla Liu: It is a real time farming strategy, resource management, science-related game. I was inspired by the integrated farming system in China. When I was in high school and first learned about [this system], I thought it was very interesting mechanism. I always wanted to make a game about it. When it came to deciding what to do for my thesis [at NYU], I picked this idea up and did it. Now you can see the project. 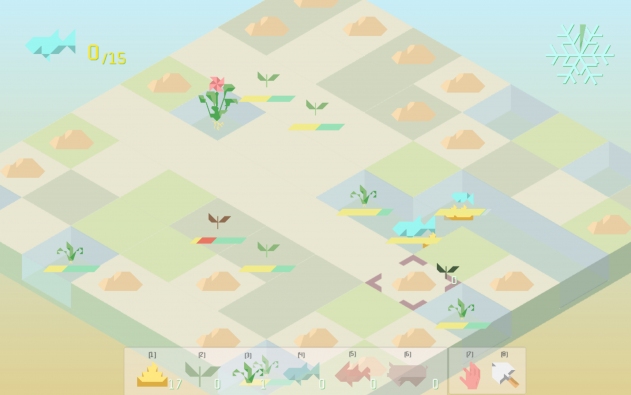 S&F: How does the game engage with science?

VL: It uses the principles of an ecosystem. For example, in the normal farming system, people plant and harvest, and the soil and the ground become weaker and weaker after several harvests because the crops absorb the nutrition in the soil. So the soil becomes less nutritious after harvesting. People thought of the idea of making a whole ecosystem in their farm, so that one part of the system provides fertilizer for other parts of the system. In the simplest way, they plant grass, then they feed fish with grass, then they feed pigs with fish. So it’s a whole ecosystem and parts benefit each other.

S&F: What sort of research did you do? Did you work with a game or science advisor?

VL: In the beginning, I didn’t work with a professor. I did do some research about the integrated farming systems and I found a lot. That kind of system is not only used in China; it is also used in other places, and there are a few different types of that kind of system. The grass-fish-pig is one of them. Sometimes they also have bamboo and silkworm and a fish system. There was a lot of potential for making a game because it has a lot of different systems so I can make different levels. After I made a prototype according to my research, then I had a professor who provided me with more professional suggestions and some system design choices. For example, after I made the simplest prototype of the grass-fish-pig system, then I asked him for further design choices, and he told me that I can add some other animals that can be in competition with the fish and pig.

My science advisor is Dr. David Kanter, who is a professor of environmental studies at NYU. He was very influential for me after I finished the prototype stage.

Also, I did some research on games about ecosystems in the current game market and I found that there were not so many references that I could learn from. There are just two games. One is Blackhole, and the game is trying to balance the whole ecosystem, but actually it’s not very hard to balance the ecosystem so the game is mainly about how to build a community with the ecosystem. It was very inspiring for me, so I wanted to make my game kind of similar. I think [Blackhole] has a very good art style. They chose a clean, minimalist style to give the player a sense of the ecosystem. I also used that style in my game. Another reference [game] I found is called ECO. The whole game is like Minecraft, it’s a sandbox game. But the game is still in development, it’s not on sale yet, so I cannot buy and play immediately. 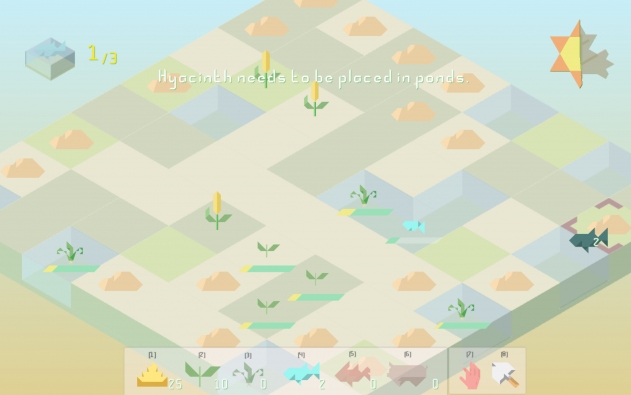 S&F: What’s next for Hyper Ecofarm?

VL: It’s more than a prototype now. The game can be played but I haven’t made it public. It has two types of grasses, two kinds of fish, and a pig. I’ll also show it at the end of year show at the NYU Game Center.

S&F: What have you noticed so far by watching people play your game, and who do you think will enjoy it the most?

VL: I have seen some people be really into it; they’ve played my game for more than half an hour, and I was very surprised they were so addicted to it. I’m thinking some people have experience with farming games, or they used to play farming games and love those games. I also think some people who like real-time strategy might also be into it as well. I think children may have difficulty learning it, but I think if I make the tutorial better then children can also play it. I don’t think there is any limitation on the age, but I think it’s more aimed for people who want to play farming games. Another surprising thing is that my mom also likes the game very much, so I think it can be played by people of all ages. Maybe some people who are interested in the concept of an ecosystem will also like it. And I think it can also appeal to people who are interested in playing cute games.

S&F: Are you calling it cute because there are animals?

S&F: How has the Sloan grant helped?

VL: I received the Sloan grant and I have already found more collaborators. I found a really cool artist and a sound designer, and maybe one more programmer and a designer who can work with me so that I can make my game a game that can be launched on different platforms after three months. I have a three-month development plan. I want to finish this game.

Shiyun “Vanilla” Liu is the second winner of the NYU-Sloan Gaming Prize. The previous winner, Owen Bell, won for his game Mendel about plant breeding. We interviewed Bell about his game.