Behind the Scenes With Greta Thunberg In I Am Greta By Sonia Shechet Epstein | November 24, 2020

I AM GRETA, newly available on Hulu, follows climate activist Greta Thuberg from a solo strike for climate change at the Swedish Parliament when she was 15, to leader of a global movement. Director Nathan Grossman has followed her from almost day one, including on a precarious boat ride from Sweden to New York, documenting Thunberg’s efforts to bring attention to the critical issue of climate change rather than to herself. We spoke with Grossman from his home in Sweden.

Science & Film: It was probably a challenge to make a film centered on one person but also about a movement. How did you square those two approaches?

Nathan Grossman: That’s one of the things I thought was so interesting, how can you make a film about a person who says she doesn’t want to be in the spotlight? The film even carries her name, it’s such a discrepancy. But the thing is, the film is to a large extent about that. Carrying this crisis on their shoulders is not something that she or these children have asked for. They wanted to be an alarm bell, and they’ve been a fantastic alarm bell to wake us up and point out that we’ve missed our targets [for emissions], but they didn’t want to carry this on their shoulders.

S&F: From the film, it looks like you were there with Greta from the beginning. Is that true?

NG: It’s true. I got a tip from a friend of mine, who knew her family, that she was going to do some small activism for the Swedish election. I was interested in climate change as a topic, so me and my boss had a discussion about going down and recording, which I almost always do if I feel that something is interesting enough; as documentarians we need to look through the viewfinder to see if a character holds up. He gave me one or two days to focus on this. Of course, it evolved to more than that in shooting, but it says a lot about how important it is to go out on the street and shoot.

S&F: What was it that you saw that convinced you that this story was worth your time?

NG: At first, I had no expectations, and she was very shy when I met her on the street. I explained who I was and if it was okay if I filmed her and her activism. Because she’s a minor I also asked to speak to her parents before filming. As the day passed, it was more and more intriguing to hear how she spoke to bypassing people and other journalists: the way that she compressed this issue of climate change into something understandable. So then I thought, maybe this is good for a short film. Then as she progressed into the world and the story grew over a half a year, we saw how this was spreading globally and could be a feature film.

The way we think about what a science film is is interesting to discuss. We’ve seen so many films about the facts and figures as main characters. Those movies are fantastic and have inspired me, but we also need to have a diversity of ways of speaking about this [issue]. This movie is not scientific in that sense, but it’s showing what the science means to a young person like Greta and to the future generations more emotionally.

S&F: What were those first conversations with Greta’s parents like?

NG: It’s been so interesting how open Greta has been about how she is an upper-middle class, fortunate, young Swedish girl. That’s part of how she’s been able to do this, because you have to have the ability in your life to spend the time to do activism like this. In the beginning, her parents were just very happy their child was doing something, because she’d had problems doing things before and had felt ill. As the project progressed, I spent more time with she and her parents and it was very important to be clear that I didn’t know where this was heading or what kind of a story this was going to be, and that it was going to be my point of view of Greta, otherwise I wouldn’t be able to tell the story. They understood that.

S&F: Do you see yourself more as a journalist or a filmmaker?

NG: I think I see myself more as a filmmaker. I have a journalistic background, but I wouldn’t call it reporting—it’s my subjective take. This film is about getting inside the head of Greta Thunberg and of course that’s not something you can do “objectively,” even though Greta said she recognized herself in the film and thinks it’s special because it’s the first time she feels that way. It’s still my subjective interpretation of how it is to be her.

NG: A journalist said to me the other day, it’s amazing seeing this movie because it’s like a prequel to a superhero film. This is not the ultimate Greta Thunberg film, it’s a year in the life. It’s an amazing, emotional, crazy year we got to experience, and I felt very content when we wrapped the shooting. I felt that I had followed her during those formative months and saw how she had evolved from a young girl to a young woman. I felt my story was done.

S&F: The superhero analogy is a good one, I think people view her like that.

NG: We should be mindful of what labels we put on her. I think the film shows that she is a superhero but also that she’s not. I think it’s so important that we remember that she might be a superhero in communicating and embodying parts of this climate crisis that we’ve missed seeing, but we as the world and the adults need to be the superheroes in fixing it. 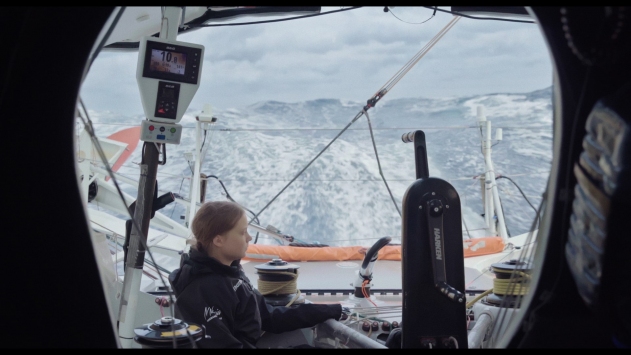 S&F: The moments on the boat from Sweden to New York are the times in the film when I felt Greta’s vulnerability most acutely. I had to wonder, were you on the boat?

NG: Yeah. I shot this movie and took most of the audio myself to be able to get behind the scenes. When she told me about the sailing, I remember I screamed in the office, is there anyone who wants to shoot this, because I will do a lot but not this. But I decided to go when I talked to the captain and heard that it was going to be bumpy but not necessarily dangerous. But of course, as you said, the boat journey in the documentary is interesting because you get to feel how it feels being on that boat, and it carries a lot of metaphoric weight. I understood how it feels to be very small in relationship to nature; you feel every wave, you’re so dependent on the wind, and you feel the strength of it and understand however we want to be in control of these powers but at the end of the day they are bigger than us.

I AM GRETA is directed by Nathan Grossman and produced by Cecilia Nessen and Frederik Heinig. It made its world premiere at the 2020 Venice Film Festival and is now available to watch on Hulu.