[Editor’s Note: This article is part of “Peer Review,” our commissioning project where scientists are asked to write about topics in current film. Dr. Kim Knowlton, Deputy Director of the Science Center and Senior Scientist at the Natural Resources Defense Council (NRDC), writes about Paul Schrader’s FIRST REFORMED. The film is in theaters, distributed by A24, and will be released onto VOD and Blu-ray on July 31. It will play at the Museum of the Moving Image from August 11 to 17.]

How does a person contend with their culpability for the collective poisoning of our planetary home? How are we not overcome by guilt for our past mistakes? Paul Schrader’s film FIRST REFORMED explores these questions in what is, by turns, a horror film and a meditation on the possibilities of forgiveness.

The film follows Reverend Ernst Toller (played deftly by Ethan Hawke), an austere, middle-aged parish pastor at an historic, somber, tiny Dutch Reform church in upstate New York. We soon learn that this little church is about to celebrate its 250th anniversary and be re-consecrated by its well-endowed big sister across town, the Abundant Life mega-church. Later we also learn that BALQ Industries, an oil company known for being unapologetic polluters, is funding the festivities. The realization that BALQ is using the church to greenwash their corporate culpability is only part of what figures in Ernst’s own environmental and spiritual re-awakening.

The heart and the horror of this film are beautifully intertwined in the characters of Michael (Philip Ettinger) and Mary (Amanda Seyfried). Mary is a pregnant parishioner who asks Rev. Toller to counsel her troubled husband Michael, an environmentalist just released from a Canadian jail. When we meet reflective, passionate Michael, we hear that he’s been having difficult discussions with Mary about bringing an innocent young life into a world already devastated by the hand of man, with a far greater ecological doomshow on the horizon. 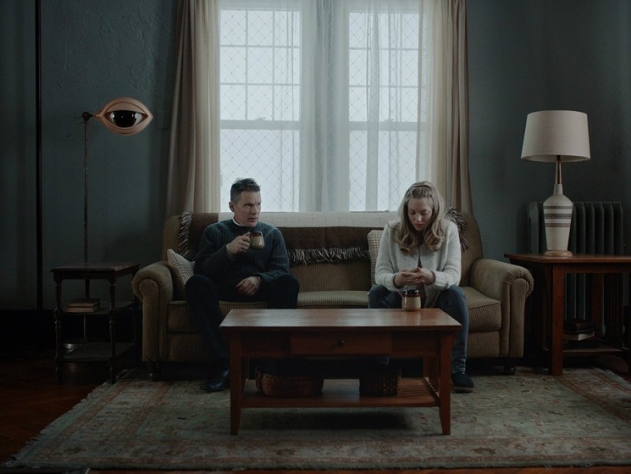 The climate science that Michael references to support his case for human-caused climate change is rock solid, even if the way he acts on the information is not. He cites statistics from major scientific assessment reports like the U.S. National Climate Assessments, the Intergovernmental Panel on Climate Change reports, and studies from the National Center for Atmospheric Research. He knows that 97% of professional climate scientists concur that climate change is caused by human activities that increase heat-trapping pollution in our atmosphere. On his bookshelf we see the 2009 Nature paper by Johan Rockstrom and colleagues, on defining a “safe operating space for humanity” within nine “planetary boundaries” (three of which we’ve already exceeded).

Michael makes the point that climate change is fueling more frequent and more intense extreme weather events like heat waves, coastal flooding, extreme rainfall, drought, and wildfires. The science backs him up. There is a lot of concern and anxiety about the changing face of nature. People are often forced to flee their homes, with few options for where to resettle. An estimated 25-50% of people exposed to an extreme weather disaster are at risk of adverse mental health effects. Up to 54% of adults and 45% of children suffer depression after a natural disaster. After a record drought in the 1980s, the suicide rate doubled, including more than 900 farmers in the Upper Midwest.

Our current geological epoch has been renamed the Anthropocene—the age of the human fingerprint on nature. Many think we’re leaving a world unfit to bequeath to innocent children. Michael asks Rev. Toller, how can we forgive ourselves for leaving future generations no options? As Michael and later Rev. Toller ask themselves, “Will God forgive us?”

Ernst Toller’s counseling session with Michael isn’t really that, nor is it an environmental fact-finding mission. It is an existential dialogue that, for Ernst, touches on something “exhilarating.” It awakens Ernst’s sense of outrage against the powers to which he has willingly submitted in the past: against the military (Ernst was a military chaplain prior to being offered a refuge in the pulpit at First Reformed) and against the church. Most vividly, his sense of outrage gets him past his sense of hopelessness. A new type of moral duty is activated in him; he is concerned less about the duties of a parish priest and more about duties to protect the planet. 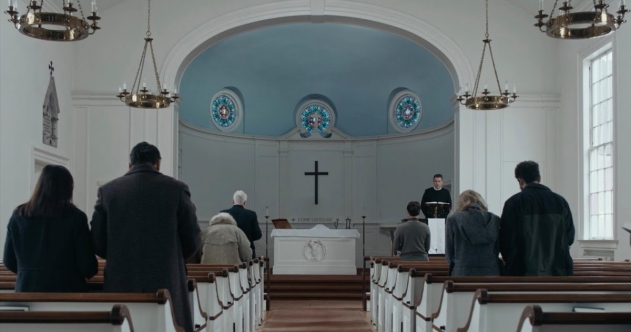 Ernst carries an unbearable guilt about his son, who was killed during a tour of duty in Iraq that Ernst encouraged maintaining that it would be the honorable thing for a young man of military lineage. This personal guilt and self-loathing manifests in the way he ignores his own acute, bloody symptoms of an undiagnosed internal illness, endlessly postponing a trip to the doctor. In this, one can hear echoes of society’s denial of the symptoms of a climate system already being disrupted and destabilized by global warming. With 16 of the 17 hottest record-breaking years globally occurring since 2001, it’s hard to deny the symptoms: as some have said, the planet is running a fever.

Young people today often express a sense of doom about climate change, asking, if it’s going to upend everything, why bother to do anything? Non-profits, researchers, and community groups promote activism and resistance to global polluterism, but one wonders: is widespread idealism dead? Climate scientists themselves admit that dealing with bleak possible futures can be depressing. Are we fooling ourselves to aim for defense of nature, and to believe in positive change?

Rev. Jeffers (played by Cedric Kyles, also known as Cedric the Entertainer) of the worldly, robust sister church Abundant Life warns Ernst that heroes like social activist/writer/contemplative Thomas Merton are “living in a dream world.” He admonishes Ernst for being “always in the garden,” both literally (the overgrown garden behind First Reformed’s churchyard) and figuratively, the garden of Gethsemane being Jesus’ place of prayer and existential agony. Ernst is grappling with having betrayed his son, himself, and the planet. (He comes up with a monstrous, imperfect plan to avenge at least one of them.)

These questions—What do I do? Why should I stay hopeful?—are not only familiar, but critical to environmental contemplation. In First Reformed, it is Ernst’s encounter with Mary that opens the door to a possible path forward. Her quiet companionship, and her invitation for him to join her on a fanciful “Magical Mystery Tour,” are probably the kindest things in which Ernst Toller can allow himself to partake. When I first watched the film, I thought the scene would surely become a gore-fest since the darkened, bare room in which the Tour happens is set like a horror movie. But surprise, Mary’s innocence and goodwill (and loneliness) win out, allowing Ernst to soar through a heavenly paradise of natural beauty, until the realities of pollution and man’s heavy footprint on the earth darken the Mystery Tour’s destination. 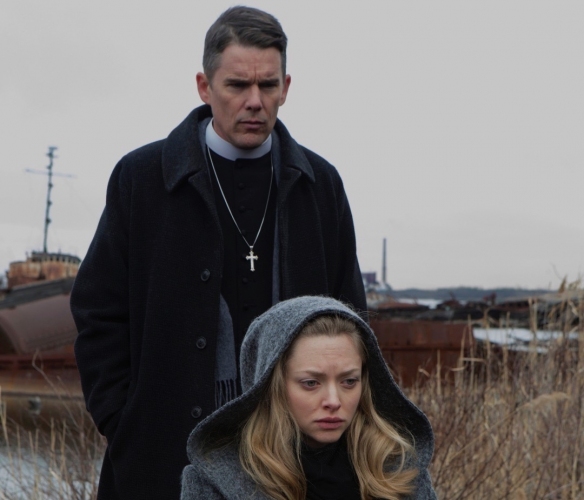 The Tour elicits in Ernst something monumental. He recognized a commonality—that others, especially Mary, care for him. Maybe something as simple as a relationship, feeling loved, connecting with a cause or a person, and truly caring about defending the future is sufficient. Among climate scientists who are prone to negative mental health effects from being awash in the latest, and frankly alarming, news about climate change’s impacts, research shows that a sense of community and working toward a shared purpose confers a sense of camaraderie, resilience, and solace.

In the last week or so, I have been reminded of the immediacy of the questions that Ernst wrestles with, hearing conversations at steamy summertime gatherings. The weather is hot and the political times are bleak. We wonder, is this world going to hell at a faster than ever pace? Heartlessness, pollution, increasing disrespect and disdain for the common good prevail, with little appreciation for the commonality of people’s struggle to bring their children into a safer, healthier, and more secure world.

I am not offering personal opinions on the film’s topics. But sometimes, just when despair seems inevitable, there are the acts of kindness and environmental good news stories: the Thai cave rescuers who risked their lives to improbably bring a dozen young strangers to safety; even in oil-rich Texas, wind energy production has exploded in the last decade; there is the blazing youth activism of the Zero Hour kids crusading for climate change action and environmental justice. Could the crucial response to environmental horror be a sense of caring, protection, and community? FIRST REFORMED has a mysterious ending, a fantasy fed by Ernst’s hunger for forgiveness and meaning, which leaves questions rather than easy answers. As warriors for a kinder and healthier future, do forgiveness and community come first, even before outrage and action? Does the alternative to depression about our ecological fate look something like … love?