The hilarious new Showtime series MOONBASE 8 stars actors and comedians Tim Heidecker (TIM AND ERIC), Fred Armisen (PORTLANDIA), and John C. Reilly (STEP BROTHERS) as NASA astronauts simulating life on the Moon in an Arizona desert. Successfully simulating and surviving isolation, an oxygen-deprived atmosphere, limited food and water, and staying healthy and fit is the only way they’ll make it to outer space. We spoke with Tim Heidecker, who is also the show’s writer and creator together with Armisen and Reilly, from his home in California about the show’s premise and its inherent comedy, the real-life simulators the show is based upon, and playing a missionary on a mission.

Science & Film: What about the premise of a Moon base simulation was funny to you?

Tim Heidecker: The genesis of MOONBASE 8 was trying to find a way for John, Fred, and me to be literally stuck together in a room. We made this before the quarantine so that might have been a way to do it, if we’d imagined a scenario where we had to be quarantined because of some disease, but this was one of a short list of things where it really made sense that these guys would have to bear down and spend time together. We realized this [sort of simulation] was actually going on out there, and as soon as you Google Moon base or Mars simulators, it’s pretty funny right away. There’s a noble aspect but the whole cos-play idea…you have guys out there in hazmat suits pretending. All the pretending is part of what’s funny and taking it really seriously—I think there is great room for comedy when people have to take things really seriously. There’s also something poetic and beautiful about that idea of going to the moon and exploring the universe. It would have felt kind of unrewarding or gross if we were like Civil War re-enactors or something, you know? Because it’s not the most noble thing. This had the opportunity to play in the sci-fi world a little bit.

TH: There was a joke in there that got cut where I said, we have GODFATHER IV and no one know about it. They made GODFATHER IV just for astronauts to enjoy.[laughs] It’s funny to have this closed world, you can’t communicate with the outside world, and you only have a set number of things. That’s probably not true anymore; if you were really on the Moon, you’d probably have access to just about the same stuff you’d have down here in terms of media. 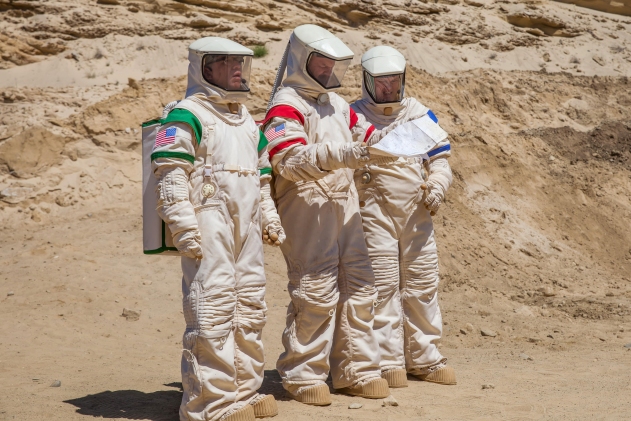 S&F: It’s interesting the time period the series seems to take place in. In some respects, it’s very retro—they’re eating freeze-dried food and watching VHS—but at the same time the external messages arrive in a very futuristic way. How did you think about placing the series?

TH: It was a challenge to figure out the best way, because we knew we needed to have communication to come in to have the story move along. I feel like it does take place a little in the future because people are going to the Moon in the show. Obviously that’s not happening right now, but it really is coming soon, in the next five years maybe we’ll be going back to the moon.

S&F: Depends on the President.

TH: That’s true. Trump said he wanted to send people to the Moon but who knows. Hopefully. But we liked the idea that NASA is still a bureaucratic organization: there’s some penny-pinching, it’s not Space X or the private sector, it’s still going to feel a little like a public school—the carpet’s going to be a little shitty. Especially in a simulator, that’s where you can have fun because they’re going to goose every dollar out of the situation. Goose every dollar? Is that even an expression? You know what I mean.

S&F: I do. You said you looked at some real-world examples of simulations, which ones?

TH: There is a series of YouTube videos about people doing these simulations. They’re usually University-run programs, they’re not necessarily government. We watched a few. They are very boring. The main goal is just to do it, to endure it, so there isn’t much to do. I think John was saying this the other day: you can’t just go up there without doing it down here, you’ve got to run those tests, but a lot of it is pretty mundane. What we liked about the mundaneness you’d see in the boring videos is that in those spaces is when we could have fun with our conversations talking about the mundane stuff that makes us laugh, or the itchiness of that experience and how we’d start to grate on each other.

We did talk to JPL, we did a nice tour, and we also met with Space X by LAX out here. It really inspired that Space X episode because there was such a night-and-day culture difference. JPL is more academic, it’s slower, pocket-protector type vibes which is great. Space X is like a tech company; it’s very young and they’re very ambitious and they’re literally welding rockets in the factory. You’re just like, this is crazy, this is really happening, we’re really doing this.

I said to one guy at JPL: what is your goal? He was like, to better understand the universe. The pursuit of science, learning about who we are and where we came from. I was like, oh yeah, that really does drive all the little things, it is about that mission. It made us feel good about just introducing these concepts into the culture. That’s our little contribution to mankind.

S&F: Definitely. That’s a lot of why I cover this niche—popular media does inspire a lot of people to go into these fields or at least gives them entre into understanding them. How did that noble ambition of the folks you met make its way into MOONBASE 8’s characters?

TH: I think it’s most present in John’s character, in Cap. He’s such a good, passionate dreamer. My character’s motivation is mostly comedic effect; he’s being told what to do by other people in his life and he’s not really a driver in that. Fred has a this is my duty and my lineage attitude. We also thought it’d be funny if John had just run out of options and this was his last chance to do something. I think that poetic sense of wonder about space travel comes out in John’s character but that inspires our characters to keep going.

S&F: The other facet of your character, his Christianity, is not something often dealt with in a science context. How did you want to integrate that into the story?

TH: Some of the stuff doesn’t get over-analyzed on our end at conception. It was sort of just like, you know what would be funny? He’s a Christian guy with a ton of kids at home and he’s there because he’s sent on a mission. The idea of a missionary situation literally out into space is funny. It’s a ripe place for exploration as to how his beliefs start mashing with the reality of the universe. 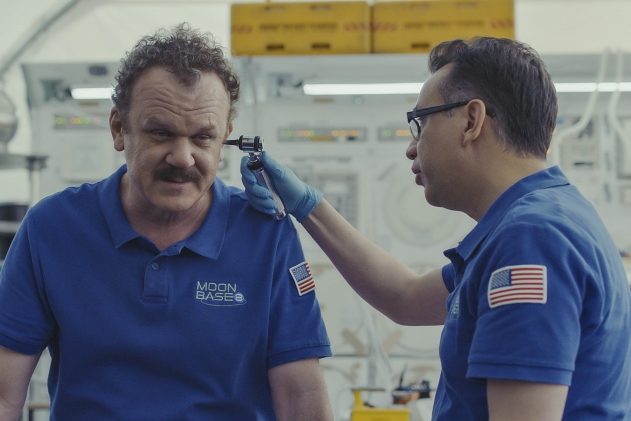 S&F: You made this show in 2018 and here we all are living in our pods. Is there anything you’ve learned from the experience of COVID-19 that makes you reflect on the show differently?

TH: Not really. We just got lucky in a weird way. It’s not like I’m glad we’re going through this, I’m not at all glad we’re going through this, but in a way the timing worked. It lands in this weird spot right after the election, everybody is sick of watching the news, everybody can relate to the idea of being stuck in a room with somebody. It’s just impossible to say we planned that, and we’d never try to plan something like that, but it is what it is. I’m sure we’ll come up for ideas about the second season, if we get one, based on this year. Do we learn anything from anything that happens to us or do we just continue to make all the same mistakes over and over again?

S&F: This next year will be a good test!

S&F: What are your hopes for the future of the show?

TH: I hope we can make more. We made the show on our own with A24. They funded it and took a big risk by saying, we hope somebody will pick this up. We didn’t make a pilot, just made all the episodes at the same time. I think we learned a little about what works and what might not, and we’d probably want to make it a little bigger in terms of leaving the dome or flashing backwards. As with anything I do, you keep building it. Now that you know these guys, you know how they’ll behave.

MOONBASE 8 is created and written by Tim Heidecker, Fred Armisen, John C. Reilly, and Jonathan Krisel who also directs the six episodes. It is available to watch on Showtime.