Dory is the beloved Disney-Pixar fish with a memory problem. A sidekick in the 2003 film FINDING NEMO, thirteen years later she is now the star of her own film: FINDING DORY. Dory is a Paracanthurus hepatus, otherwise known as a “royal blue tang” fish. According to the website Film Fun (translated from the Russian), “their diet consists mainly of innocent plankton, [and] they reach sexual maturity [at] nine months of life, which seems quite early. In captivity, life expectancy [of the] blue tail varies from eight to twenty years.” According to anthropologist Barbara King, the fish prevent coral reefs from overgrowing by grazing there. She spoke with ecologist Culum Brown who told her, “We know that [the blue tang’s] skin reflects light at 490nm (deep blue) and they tend to get lighter at night (this is under hormone control). They have very sharp spines on either side of their tale which erect when [the fish are] frightened. They have a huge distribution (Indo-Pacific) but are under threat from illegal collection.” 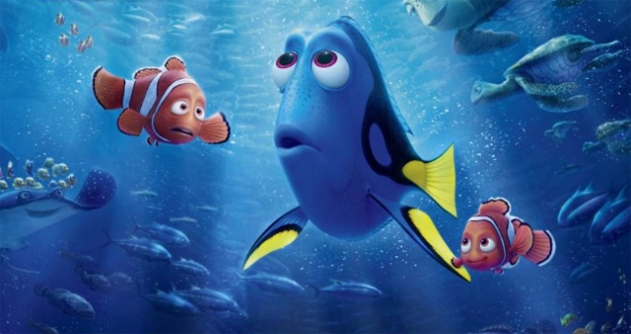 Jonathan Balcombe, the director of animal sentience at the Human Society, has uncovered studies documenting fishes’ collaborative behavior and their remarkable memory capacities. (Balcombe has published on Science & Film about the issue of personhood and animals). Dory is no such fish. She has a memory disorder called anterograde amnesia, meaning that she cannot form new memories. Her disorder is much like that of the famous amnesic patient H.M., who suffered epilepsy and underwent surgery to remove both his right and left temporal lobes–though his seizures ceased, he was subsequently unable to form new memories. Incapable of converting short-term memories into long-term memories, H.M., like Dory, had a memory which only lasted a couple of minutes. (According to neurologist Brenda Milner, every morning H.M. woke up to “buzzing, blooming confusion.” His case served as the basis for the discovery that memory is localized to a particular part of the brain.) FINDING DORY explores what it was like for Dory to grow up with anterograde amnesia.

Anticipating the film’s wide appeal (the biggest hit of the summer?) Disney has already advised that blue tangs do not make good pets. The fish make a crucial contribution to their ecosystems by maintaining the coral reefs. Remember this when you see FINDING DORY, now in theatres.

To read more about how characters become animated, read the Science & Film interview with Pixar’s Director of Photography, Danielle Feinberg.