“Dear Sir…I beg to introduce myself to you as a clerk… of the Port Trust Office at Madras… I have been employing the spare time at my disposal to work at Mathematics…I have not trodden through the conventional regular course…but I am striking out a new path...”

What followed in the letter were astonishing mathematical formulas, so otherworldly the letter's recipient could not help but believe they were true. Written in 1913, it has taken mankind one century to understand their meaning; along the way, the pursuit has led to solutions of ancient mathematical mysteries, breakthroughs in modern physics, and ideas which help power the internet.

A major motion picture based on the life of the letter’s author, THE MAN WHO KNEW INFINITY, starring Dev Patel and Jeremy Irons, was released April 29th (Ken Ono is an Associate Producer of the film). The mysterious “clerk of the Port Trust Office of Madras” has been in the air a lot recently. News stories about black hole physics and discoveries in mathematics often center on his work.

With this letter, Srinivasa Ramanujan—impoverished Hindu college dropout, self-taught in mathematics, reaching for worlds beyond the shores of India—introduced himself not only to G.H. Hardy (superstar British mathematician), but to the history of human thought. Ramanujan spent his youth sitting on cool stone floors in the neighborhood temple, surrounded by deities, his mind wandering the cosmos of math as he built upon the contents of a shabby textbook that was his bible.

After absorbing the surprising equations in the letter, Hardy invited Ramanujan to study in England, an extraordinary offer for an Indian under colonial rule. Together they innovated vast tracts of mathematics, before Ramanujan returned to India in fragile health. Tragically, he died at 32 from a misdiagnosed illness, leaving three enigmatic notebooks that drive cutting-edge research to this day.

Just as he spent his days immersed in ancient mythology, Ramanujan shed new light on mathematical topics rooted in classical times. Ramanujan was fascinated with the famous number pi, and found many surprising formulas for this constant—in fact, the best computer algorithm ever found for computing the digits of pi is based on Ramanujan’s work. Moreover, he found deep formulas relating pi to the golden ratio, both constants were considered in Euclid’s Elements, such as this “continued fraction” identity (which also involves another famous constant e):

This exotic formula, and an infinity of others like it, result from what we now call the Rogers-Ramanujan identities. (There is another romantic story here, of an obscure 19th century mathematician whose work Ramanujan himself rediscovered and popularized). In the pursuit of the meaning of relations such as these, unexpected areas of mathematics and physics blossomed in the modern era: partition theory, representation theory, statistical mechanics, to name a few.

Ramanujan’s works have been an everlasting source of suggestion for the world’s leading mathematicians. His work on the tau-function plays a central role in the development in modern number theory and algebraic geometry. His observations inspired the formulation of the Weil Conjectures, whose proof earned Pierre Deligne the Fields medal in the 1970s. These ideas form the groundwork for an entire area of mathematics whose range of applications includes the internet. Other observations anticipated the theory of modular Galois representations, a subject which forms the groundwork for the celebrated proof of Fermat’s Last Theorem by Andrew Wiles in the 1990s. Ramanujan’s work on his death bed is presently driving cutting edge research in string theory.

To mathematicians and scientists, Ramanujan symbolizes pure inspiration, the sort of creative flights more often associated with musicians or artists. To contemporary India, he is a national hero, a household name. Furthermore, the story of Ramanujan provides a modern archetype, the rise from humble conditions to the world’s center-stage that modern-day India itself exemplifies. But what makes Ramanujan’s story worthy of a mass audience?

First there is human interest. “My association with him is the one romantic incident in my life,” Hardy wrote after Ramanujan’s death. At the heart of THE MAN WHO KNEW INFINITY is the awkward friendship between the self-taught, pious Ramanujan (played by Patel), and the rigorous, avowed atheist Hardy (played by Irons). This unlikely alliance is itself of mythological flavor. It was a miracle that Ramanujan's letter made its way to Hardy's desk from India. He had reached out to other academics before, to no end. That Hardy worked through its strange contents, recognized the author's brilliance, and took Ramanujan under his wing, is also hard to imagine, for Ramanujan was an unlikely student. So enraptured was he with his continual discoveries that he flunked out of college twice. (“It is the worst instance that I know of the damage that can be done by an inelastic educational system,” commented Hardy). 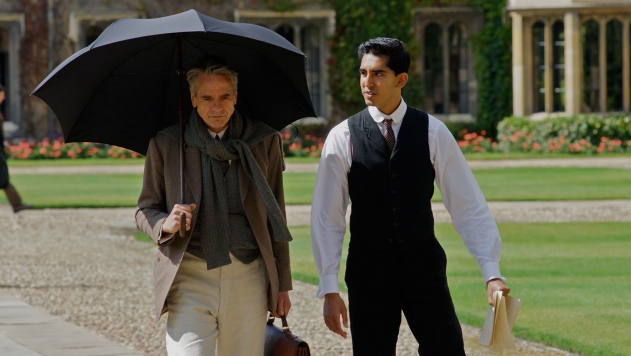 Moreover, the story has an important moral in today’s society. Ramanujan matters because he represents endless curiosity and untapped potential, which we all have to believe in to proceed in the sciences. Science usually advances on the work of thousands, over generations, fine-tuning and extending the scope of understanding. But from time to time, creative fireballs like Ramanujan burst onto the scene propelling human thought forward. Yet what if Ramanujan had not reached out to, or been taken seriously by Hardy? The loss of scientific understanding is something our modern world could not absorb. He matters because science matters: curiosity and creativity drive scientific inquiry.

Echoing Hardy’s criticism of the “inelastic” nature of Ramanujan’s formal schooling, today’s educators are flooded with a litany of complaints–disaffected students, teacher burn-out, over-testing, obsolete technology, inadequate funding, to name a few. How would we recognize and nurture an outlier like Ramanujan today, as Hardy did in his time? Like SETI, constantly listening for signals of alien intelligence, we as a global civilization must scan our cities, towns, and villages for the next Ramanujans.