Japan’s entry for the Academy Awards is Chie Hayakawa’s debut feature PLAN 75, which made its world premiere at Cannes. Set in a near-future Japan, the film follows the daily lives of a few individuals who are distinctly affected by a government program of assisted dying for those aged 75 and older. PLAN 75 stars Chieko Baishō, Hayato Isomura, Yuumi Kawai, Taka Takao, and Stefanie Arianne. At the film’s North American premiere at the Toronto International Film Festival, we sat down with writer/director Chie Hayakawa to discuss her motivation for telling this story.

Science & Film: Where did the idea of a government program like you portray in PLAN 75 come from?

Chie Hayakawa: I’m not particularly interested in aging issues in Japan, I came up with this idea based on my anger at the intolerance of society in Japan towards the socially weak people including the elderly, disabled, and poor. One incident triggered my motivation to make this film. In 2016, a man killed 19 disabled people in a care facility. I feel really scared and angry towards such people who talk about human life based on productivity.

S&F: That reminds me of the scene at the beginning of the film.

S&F: What was important to you in showing a range of people and backstories?

S&F: Why didn’t you want to show them?

CH: Because one of the problems that Japanese people have now in society is that we don’t know how we can protest. We don’t feel like our voice is reaching the politicians. So, we don’t know who to say no to. I feel like it’s kind of scary to not know who is controlling society. That helplessness we feel in the current situation, if I depicted someone who is controlling the system, it would have been too obvious and easy to set up the enemy. I wanted to paint more of a picture. 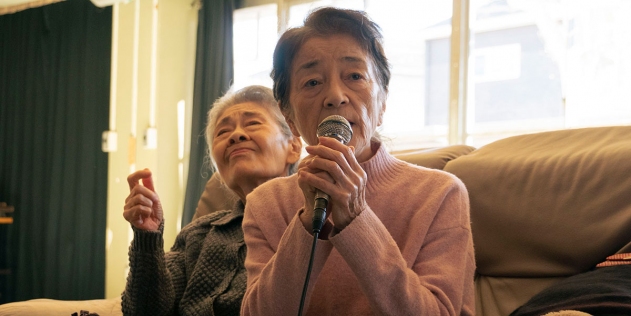 Still from PLAN 75, courtesy of TIFF

S&F: The character who is working for Plan 75 in the film, can you talk about the background you imagined for him?

CH: He doesn’t have guilt at first, he doesn’t imagine what will happen to people after he admits them. He’s not mean, he’s not a bad person, he is a very hard worker who just does what he has to do out of duty. But he gradually realizes what kind of system he belongs to, and how inhuman the system he’s working for is. His realization is kind of a hope in the story. He stands for the majority of Japanese people who have stopped thinking and are just accepting what the government decides. They give up protesting and try not to think even though they don’t feel right, because we don’t know how to change [the system]. So, rather than struggling to change it we just accept. That kind of obedient characteristic is very specific to Japanese character.

There are many countries that have similar issues, so I’m sure that it’s not only Japanese audiences who will be attracted to the story. Also, it’s not only about aging, but also about the system that eliminates the socially weak from society. That’s happening all over the world, so I think it’s a universal theme.

S&F: In terms of adapting PLAN 75 from a short to a feature, what did you want to expand upon?

CH: The short version was only 18 minutes, so I didn’t have enough time to depict emotion and develop each character. I only set up the concept in the short, but I couldn’t show hope. I wanted to express some kind of hope in the feature version, because while I was writing the script, we experienced the COVID crisis. When that happened, I felt like, this is a very depressing film and people are already suffering, should I make such a depressing movie to make people more anxious? So, I decided to put a bit more hope into the film. Initially, the film ended with a very depressing ending, so I changed the ending. But it’s not really a happy ending.