David Burke & Phil Kennedy: Father of the Cyborgs at Tribeca By Sonia Shechet Epstein | May 12, 2021

Making its world premiere at the 2021 Tribeca Film Festival, the new documentary FATHER OF THE CYBORGS profiles neuroscientist Dr. Phil Kennedy whose research on brain-computer interfaces came under scrutiny when he implanted his own brain with electrodes in 2014. The film received development funding from the Alfred P. Sloan Foundation and its June 17 Tribeca premiere will be followed by a Sloan-supported panel discussing Dr. Kennedy’s work and its legacy. We spoke with Dr. Kennedy and the film’s director David Burke about where the field of brain-computer interface is headed just as Dr. Kennedy found out that the film had been accepted into Tribeca.

Science & Film: David, how did you get interested in this Dr. Kennedy’s work?

David Burke: I was looking to do something on bioengineering—I have an interest in neuroscience at an amateur level—and I came across an MIT Technology Review article about Phil’s self-experimentation. Because it was so topical with what Facebook and Elon Musk are trying to do, I was immediately hooked. I kept reading and came across an article about the history of brain implantation by John Horgan who is in the documentary. [The subject] had the past, present, and future. Then, what surprised me the most, is that Phil is from Limerick, [Ireland] which is 20 miles away from where I’m from. So, that’s how it started.

I got in contact with Phil and as luck would have it, he was coming to Ireland, so we met up. I shot a small interview. I got development funding from Screen Ireland to make a trailer. I think when Phil saw the initial trailer, he knew what I was thinking.

S&F: Phil, why did you agree to participate in this film?

Phil Kennedy: When we first met in 2017, I realized David wasn’t totally crazy (laughs). I had a lot to say. I’ve taken this research very seriously since the 1980s when I started. I had implanted a total of six patients and felt the message about it was being lost. It’s great to have competitors in the field, including Elon Musk who you mentioned, but there’s so much I’d done that I felt needed to be known. We had worked for ten years on a patient named Eric trying to get him to speak, and then I realized that there are some questions that cannot be answered by somebody who is locked in, so I implanted myself. I thought that had to be put into perspective, because most people who do things like that are not in the mainstream—to put it politely. That’s why I thought that something like what David was proposing to do would be a good idea and as we went through it, I realized David is an excellent director.

S&F: David, how did you determine what was pertinent to include in terms of the history of brain-computer intefaces?

DB: One of the first contributors I contacted was Karen Rommelfanger who is an ethicist at Emory specializing in the field of brain-computer interfaces and she was really helpful. One of the first things she mentioned was that this field is full of rabbit holes you can disappear into. I subsequently did, but it was kind of reassuring to know it wasn’t just me. But I had to keep the story streamlined; everything had to be one degree away from Phil, and that’s how we decided. 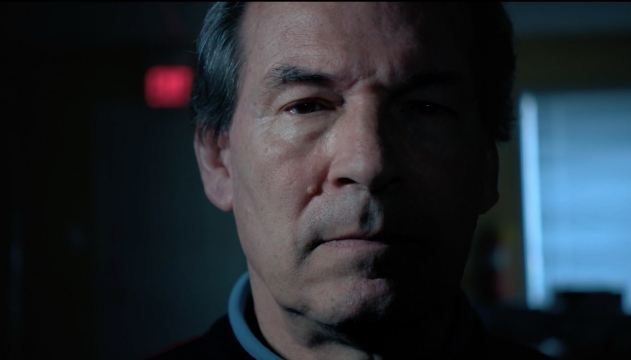 S&F: Phil, it seems that the perception of you as a scientist has shifted over the years and that funding for your research has been somewhat tied to that perception. Would you agree?

PK: Projects go in and out of fashion. You might be top dog and next it’s, what’s your next trick? They never fund ongoing work, which is a real pity, so what we’ve done is form a non-profit fund and we’re going to ask for funds from this documentary etc. Because all I want to do is continue on and try to get people who are mute and paralyzed to speak. Once we get that going, then we can look to the future. I know a lot of people didn’t like what I did, and they’re the ones deciding on funding, so I’m not too optimistic about getting funding that way.

S&F: So your interest in brain-computer interfaces is to help patients who are locked in and can’t otherwise communicate. Yet you acknowledge in the film that this research is headed towards the realm of enhancement. Can you elaborate on the direction the field is going and where your interest is now?

PK: We’re trying to record from the brain and use it outside on robot arms, or speech, or whatever. The problem is: [the technology] can still be abused. If any nasty body—government or private corporations—went after this and put electrodes in people’s brains to control them, that is a possibility. It’s a remote possibility, but there are some governments that I think would do it. That bothers me greatly. There certainly is a possibility of abuse but we’re all trying to stay on the good side of the equation.

READ MORE: Taryn Southern and Elena Gaby's I AM HUMAN

S&F: And you see that as helping patients?

PK: Absolutely. That’s the main thing. As Melody Moore said [in the film], when you develop a device for a patient, people want to use it. So, I definitely do see it expanding out and helping people augment their brains. A cell phone in the brain is totally doable in my view.

S&F: Does that worry you?

PK: First of all, the person who gets the cell phone in the brain should be able to turn it off. You want to go to sleep sometimes! Secondly, you can track people’s phones—what they do, their conversations, etc.—and that tracking ability must not be in there. There must be some way of really securing that out of the cell phone in the brain and that’s not that easy to do because every electronic can be hacked.

S&F: It does bring up the role or responsibility of pioneers in this field like yourself and whether you weigh in on the applications for your research.

PK: I can just say what I want to say. I have no real power, just the power of opinion. Not everybody’s opinion is valued these days, some are suppressed, that could happen too.

DB: We’re talking about putting cell phones into brains and things like that, and I don’t know what’s going to happen in the future, but what really struck me was that we’ve already started to take this walk. For example, if you go back to Socrates, he didn’t like the idea of writing because he said it would affect our memory. Fifteen years ago, I remembered all my friend’s phone numbers and now I don’t know any of them. Socrates was probably right, it did affect memory, but writing has had huge benefits for mankind as well. It’s about finding that sweet spot, where technology is working for us rather than the other way around. It’s a broad statement but I think there’s something to it.

It also depends how you classify enhancement. Coffee enhances your brain. John Donoghue, one of the people in the film, made a very good point: we don’t even know what a thought is yet. That puts things into perspective in terms of how much we know about the brain. On the flip side is someone named Rafael Yuste, a world-renowned scientist also in the documentary, who reckons neural rights should be part of human rights.

PK: The Hippocratic Oath is something we have to take, which says, don’t do any harm. That should be number one in the Technocratic Oath. The question is, how many will sign that? I’m not a believer in regulation but I am a believer in standards, and we should have a moral standard in this field.

S&F: What’s next for the film?

DB: I just found out half an hour ago that it’s gotten into the Tribeca Film Festival! So that’s amazing.

FATHER OF THE CYBORGS is written, directed, and produced by David Burke. It is also produced by Sean O’Cualain. The film is edited by Cara Holmes and scored by Simon O’Reilly. It will make its world premiere at the Tribeca Film Festival on June 17.