In the new indie horror film THE BEACH HOUSE, a tranquil setting turns into a primordial danger zone for a couple who simply wanted a weekend away. Liana Liberato stars as Emily, a student in astrobiology, a field of study focused on the origins of life and how organisms adapt to extreme environments. THE BEACH HOUSE is Jeffrey A. Brown’s first feature as writer and director, though he has a long career as a location manager for films including Jim Jarmusch’s THE DEAD DON’T DIE and series such as THE OA and MASTER OF NONE. We spoke with Brown by phone on July 9, the day THE BEACH HOUSE was released onto AMC horror streaming platform Shudder.

Science & Film: Why did you write a main character who is a scientist?

Jeffrey A. Brown: There are scientific concepts that I was interested in exploring in a dramatic sense. In earlier drafts we tried to have her not be a scientist and it just didn’t work; that would put the heavy lifting on other aspects of the movie where it would make it a completely different movie—you’d need someone to explain what was going on and I didn’t want that. I thought it was better to have a character interested in [science] who could discuss it in a way that becomes integral to the story. I see the movie as an anxiety dream of Emily’s character. Putting the plant of astrobiology in the audiences’ mind, they are hopefully thinking about these types of concepts and applying them to what they’re seeing.

I’m pretty picky with a lot of science fiction films, I have trouble with a lot of them when they blur the lines of the purely fantastic as opposed to the scientific. Astrobiology was something I had never seen discussed in a fictional film before, so that was very important to me to try to explore these avenues. 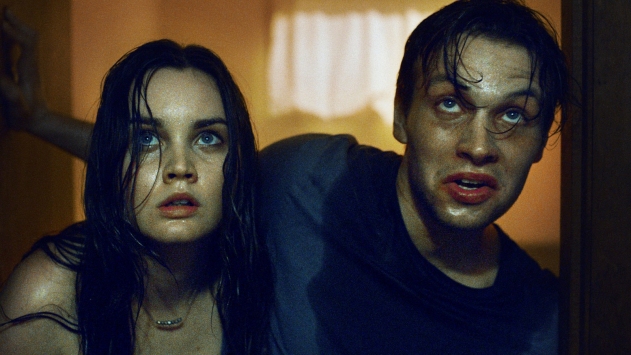 S&F: How did you learn about astrobiology?

JAB: There is a book called Vital Dust that I picked up on a whim. Then, I read a bunch of other books about the question of where organic matter on our planet came from. I like the line that I wrote that Liana says about [how astrobiology is] “where chemistry becomes biology,” because that is a question; where did the building blocks of what would become water and other organic life come from? There is a gap in our knowledge and we’re looking back billions of years to try to determine where that came from. These types of ideas are what I wanted to explore in our film in a very organic sense, not in a highfalutin, science fiction-y, artificial way.

JAB: That’s the horrible end game of climate change: it would make our planet uninhabitable. Venus is the greenhouse effect run rampant with sulfuric clouds. Reading a lot of these books about astrobiology, at the end is this grim concluding chapter about how we need to take what’s happening to our planet very seriously. Stopping [climate change] is not necessarily even on the table anymore. I think the quest of humanity is to say no to self-destruction. The movie is apocalyptic, so it is exploring the death of humanity, and these are very serious questions that are not fantastic. I wanted to explore these questions in a narrative sense and how humans react on a ground level as opposed to an abstract concept.

S&F: Not that they fare so well.

S&F: Were you ever tempted to write a happy ending?

JAB: JG Ballard was a huge influence on the script and he’s one of my favorite writers. He has a series of books about the destruction of the planet and his protagonists accept it in the end. It’s a horror film, and that’s one of the aspects of horror, that you can do unhappy endings. Once upon a time in Hollywood there were unhappy endings in dramatic films, around the late 60s there are a lot of existential films where the characters die or accept their fate or learn a little more about the world they’re in and it’s not always a good thing. You have unhappy endings in horror all the time. In the writing of it, I knew it was never going to have a happy ending, but I wanted it to have a satisfying ending that wasn’t necessarily hopeful, but not just doom and gloom.

S&F: One thing your film made me think about a lot is how humans evolved from the ocean. Was that part of your intention?

JAB: Very much. What is a womb but a makeshift ocean? I was doing research about prehistoric insects for another project and I found out that wings evolved from gills—that is crazy!

S&F: Location is very important to this film. How did your experience as a location manager feed into the narrative, if it did?

JAB: I’m a pretty visual writer. I visualized a house I’d been to, to write around. Then, our producer Andrew Corkin’s father had a connection to a house I’d seen on a scout, so I did a rewrite to tweak the narrative to fit the specific location. If you’re on a big budget movie, you start tweaking the location to fit the script. Knowing what our budgetary constraints would be on this film, we couldn’t do that. It’s all about making the best possible film regardless of the budget, and that was something where my experience helped me make quicker decisions than a director who would maybe keep in the back of his mind that perfect house. One of the least favorite things you hear as a location manager is a director who says, well it’s got to be out there. I don’t believe that. It doesn’t have to be out there. What you have in your head doesn’t exist.

S&F: During this time in which there is a potentially deadly virus circulating and there are a lot of perils to going outside and interacting with others, I’ve been thinking a lot about the similarities that the horror genre offers. How is it having your film released when it is perhaps closer to home than you might have imagined initially?

JAB: Horribly ironic. Horror is a cathartic genre. Horror writers, especially Stephen King who is a very archetypal, he’s a massive influence on horror, and a lot of his earlier books are very specific about his fears. He is confronting his fears through the safe remove of fiction. This was a similar thing [for me]; I was confronting anxiety that I have and that my wife, who has a science background, has—she was teaching a class on weather and climate when the pandemic hit. I want to keep the alligators at bay when I’m writing, I don’t want the alligator at my door. And the alligator is at the door. So it’s freaky.

With climate change, extreme weather is going to keep happening. It’s going to get hotter. There are going to be more hurricanes. When those types of things happen, the fragility of society is exposed and things fall apart. I wanted that in the movie because it’s terrifying. In America, the cracks are showing, and I think there are ways to mend the cracks and to improve our society and our world. We’re quarantined, we’re in a pandemic, and THE BEACH HOUSE is coming out on Shudder today.

By the way, one little known fact, since you work at the Museum of the Moving Image: Do you know the restaurant Mars, which is about a block away?

THE BEACH HOUSE is written and directed by Jeffrey A. Brown. It is produced by Andrew Corkin, Tyler Davidson, and Sophia Lin. Liana Liberato, Noah Le Gros, Jake Weber and Maryann Nagel star. It is now available to watch on Shudder.