The Story of Ada Lovelace: From Screenplay to Novel By Sonia Shechet Epstein | June 21, 2019

Almost 15 years ago, in 2005, UCLA graduate student Shanee Edwards won a Sloan Screenplay Award for ENCHANTRESS OF NUMBERS, a dramatization of the life of Ada Lovelace who is often regarded as the first computer programmer. In 2019, Edwards published her screenplay as the novel Ada Lovelace: the Countess who Dreamed in Numbers, which was released on March 1. We interviewed Edwards by phone about the story and the process of turning the screenplay into a novel.

Science & Film: Can you tell me about your screenplay, and why you wanted to turn it into a book?

Shanee Edwards: I was awarded the Sloan award in 2005 for my screenplay ENCHANTRESS OF NUMBERS. It is a biopic about a woman named Ada Lovelace who is considered to be the world's first computer programmer for the work she did with [mathematician] Charles Babbage in the 1800s.

My screenplay initially got a lot of heat. It got optioned and I had a director attached and I had actresses attached, but at the time period films were considered very expensive to make and it was hard to get investors from Europe to tell a British woman’s story, especially since I was American. I'm not saying that never happened, but I knew that was a one strike against me. People would get excited about it, we’d start to put the financing together, and then it would fall apart. And finally, I just got so frustrated because I love her story and I was just so excited to be able to share that story. And if your screenplay doesn't get made there is nothing you can do. I could have tried to shoot it on my iPhone but it’s probably not going to look so great, you know [laughs]. So I figured the next best thing would be to write a novel. I had never written a novel before and it was a very, very different experience. 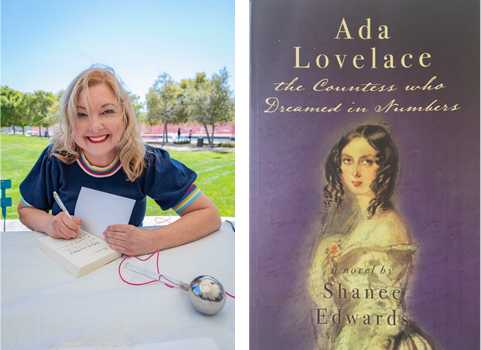 S&F : Did you have to buy the option back for your screenplay?

SE: It had expired fortunately. Honestly, I don’t really know what the legal stuff is going from a screenplay to a novel. I don't think it would have been a problem legally but I don't really know.

S&F: When did you begin writing the book, and what were some of the challenges with that form?

SE: I have a background in theater and then in film. All of the writing I had ever done was meant to be spoken by actors. So getting into a novel, you have to describe every little detail. You do a little bit of that in the screenplay, but very little.

My first attempt at writing the novel I wrote it in the third person, because I looked around at some young adult writing and it all seemed to be in third person and I thought, okay, well that's what I have to do. But it was terrible. So I went back and rewrote it in the first person, from the point of view of Ada Lovelace and it just took off because that was me sort of getting in the head of the character I had created and letting the reader experience her thoughts and what was going on inside her head. I realized that really worked.

S&F: Did you have to do additional research for the book in addition to what you did for the film, where I imagine you had a science advisor?

SE: I did have a science advisor when I was writing the script, and I also traveled to Oxford University in England. I was given permission by the Byron Estate—her father was Lord Byron—to read Ada’s actual handwritten letters from 200 years ago. It was really really really cool.

I didn't have to do any additional research for the novel other than like what people ate in Victorian England. That was my favorite part because they ate really disgusting things like jellied eeland Stargazy pie which is like a favorite fish pie where the fish heads are on top of the pie and it is like they are gazing at the stars. All those little details that I could never put into the screenplay I got to put into the novel, so that’s why it was fun.

S&F: Speaking of details, something that often happens to films about science is that once they get made a lot of a lot of the science from the script tends to drops out. I'm wondering if in the process of writing the novel that was true for you too or whether the mathematics stayed in there?

SE: Actually I was able to include a little bit more of Ada’s studies. Not only did she study mathematics, but she also studied the stars and the planets and all that kind of stuff. So I got to put a little bit more science into it than probably you would have seen in a screenplay. And that was fun to me, because I'm into it.

S&F: Have you thought about the reverse now, going back to it as a film that is?

SE: Oh, I would give a body part to have someone make this film [laughs]. Oh my gosh, it's just been a long time, you know. Part of me also wrote the novel so that I could kind of move on from this project—though obviously I've written other screenplays. You do hear stories about screenplays getting made after 20 years. If that happened, I would be the happiest person on planet Earth, but, you know, we’ll see. Not holding my breath, Sonia!

S&F: Has any of your other work integrated in science in any way?

SE: Yeah. From the ENCHANTRESS OF NUMBERS script I got my first agent and my first writing job. My first writing job was to write a biopic about Charles Darwin. Needless to say I had to really, really research evolution and Darwin. I ended up going to his house in England. That was great. There was a competing project that was shooting right as we finished the screenplay so again that project kind of went dead in the water [laughs].

S&F: So how has it been to have the novel in the world?

SE: It was published in March of this year. Just published! I’ve done one signing and it was one of the most positive experiences of my writing career. In LA, there's a place called Silicon Beach where Google and Facebook and all of the tech companies are in this one mile area. I did my signing there and there were all these female coders who knew of Ada Lovelace and came up and just bought the book! It was just really fun, I was like, oh these are my people, they know who she is. I spent years trying to explain to everybody who Ada Lovelace is and these women just got it, so that was so fun.

S&F: That’s one of the things of having your work in the world, your people come to you. Are you planning on doing any other signings?

SE: Yes, I'm working on getting another one in LA, and another one in Reno, Nevada. So we’ll see what happens. This is the first interview I've done about the book. I'm so grateful and thrilled to be part of the Sloan family. And I will say, when you're a screenwriter you always feel like you have no power because you're waiting for the directors and producers and money. But this was one way that I could take my story and take control back. I would encourage any screenwriter, especially people who have these great science screenplays, to put it into novel form. Or make it a web series. Do something with it, you know, you obviously poured your heart and soul into it so see what other form it can take.

Shanee Edwards's novel Ada Lovelace: the Countess who Dreamed in Numbers is now available on Amazon.