Julianna Margulies (THE GOOD WIFE) stars in National Geographic’s new six-part limited series THE HOT ZONE, based on the true story of the emergence of the Ebola virus in the United States in 1989. Margulies plays Army colonel Nancy Jaax, who was then chief of the pathology division at the United States Army Medical Research Institute of Infectious Diseases in Reston, Virginia. Dr. Jaax was one of the few people with a speciality in Ebola, which had a 90% mortality rate in people, and was a leader in researching and containing the virus. In the Medical Research Institute, the virus had to be contained in a hazardous Level Four biosafety lab, otherwise known as the titular hotzone.

THE HOT ZONE made its world premiere on April 30 at the 2019 Tribeca Film Festival, followed by a panel sponsored by the Alfred P. Sloan Foundation. The Foundation supported the best-selling 1994 book of the same name by Richard Preston, from which the series is adapted. Preston was on the panel, along with stars Julianna Margulies and Noah Emmerich (THE AMERICANS), screenwriters Kelly Souders (SMALLVILLE) and Brian Peterson (GENIUS), producer Lynda Obst (CONTACT), technical supervisor and pediatric infectious disease physician Dr. Michael Smit (Children’s Hospital Los Angeles), Columbia University epidemiologist Dr. Wan Yang, and National Geographic photographer Nichole Sobecki. THE HOT ZONE will make its television premiere over three nights on National Geographic beginning May 27. The Ebola epidemic is ongoing in Congo.

Below are some select quotes from the panel discussion.

On developing the series:

Lynda Obst, producer: [THE HOT ZONE] is so much better in television than it would have been as a feature, even though I spent a good twenty years trying to make it as a feature [laughs]. The thing that made us so lucky is that the golden age of television emerged just as this was being mounted. There was this thing called a limited series, which would allow you to tell a story in six episodes that in a feature we would have to tell in three acts.

Kelly Souders, screenwriter: One of the things we responded to in the book [The Hot Zone] was that once you learn more about [Ebola], you realize it’s not really a question of if, it’s a question of when. It is out there, lurking, and at some point it is going to raise its ugly head in this country. What we really wanted to do character-wise was figure out what you would do if you really had the knowledge that the people at the center of the story had, and how does that affect you? It’s like a viral terrorism. It can strike anytime. As much as you want to prepare, there’s a certain level you can’t be prepared for and how do you go about living your life? 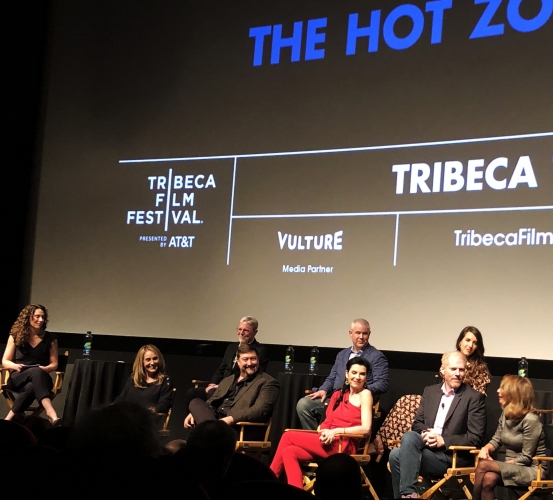 Julianna Margulies, actress (Nancy Jaax): [In real life,] I wouldn’t have been as calm and steady as [Nancy Jaax was in response to all the men in her professional life standing in her way]. She would take another deep breath as she’s told that she doesn’t know what she’s talking about. With every blow she just keeps going forward. I wanted to show that determination rather than the angry hysteria that would be bubbling under my skin if I was top in my field and someone was saying no. I never approached the role as a woman who was constantly being told no, and I think Nancy would say the same thing. I approached the role as a woman who knew what her job was and she kept deflecting the nos because she knew what she had to do. 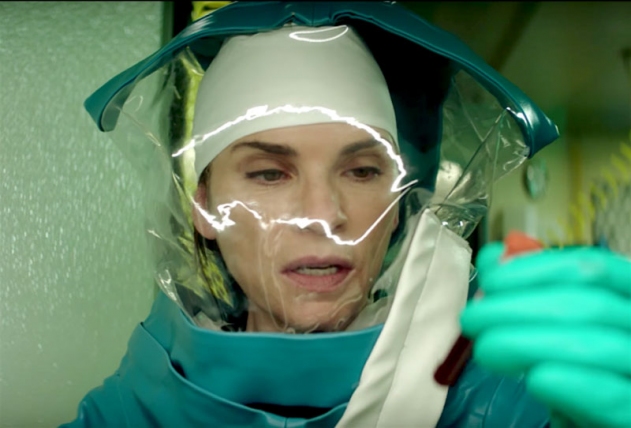 Noah Emmerich, actor (Jerry Jaax): I think of Jerry’s reticence to let Nancy go into the danger pit less of a reflection of his belief in her ability or her apptiutde, but more as a protective instinct for his need for her and her vital role in the family structure. It actually speaks to her double ability as a homemaker and protector of the family, and also as someone who is at the top of her field in her job. What he has trouble letting go of is how much more she’s needed in a bigger role than just matriarch of his family. It was tricky, I didn’t want [the role] to feel in any way misogynistic or sexist, more a reflection of how deeply he felt he couldn’t do the family without her. For me as an actor, [I approached] it with that fear.

Julianna Margulies: As someone who is not schooled in science at all, one of my favorite scenes in the whole show for us mere plebians was the introduction [Nancy Jaax] gives to the cadet going into the biohazard Level 4 lab. You just usually cut straight to the lab, that’s a normal scary science movie. To see her in all her glory—she’s in her element there—teaching him and seeing the black light and understanding taping up and all the steps to get into a biohazard level 4 lab, I felt that brings the whole audience in with the science. […] The [biohazard level 4] space suits are very difficult to maneuveur in, and it was very difficult to remember the scientific dialogue while those two fans are keeping the circulation so all I’m hearing iswhirr whirr while I’m trying to say “immunofluorescent…” It was such a mindfuck, every day. But when I asked Nancy how she could stand it, she said that was her happy place [laughs]. 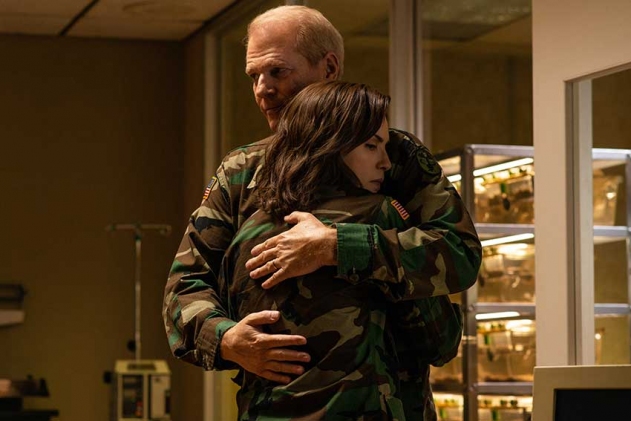 Richard Preston, author of The Hot Zone: A virus is a parasite of the human body, and when Ebola enters your body—let’s hope it never does—it gets into the person’s cells and it takes over the cell and transforms the cell into more particles of Ebola. So Ebola is a kind of anti-human shadow of the human form. Ebola particles are made one hundred percent out of human material. As the virus amplifies itself in the body, it uses more and more of your raw mateiral to make more and more of itself. So in a way, it’s the antagonist of the human species but a dark and voiceless one. As I researched the book The Hot Zone, I ended up going into a biosafefety level 4 Ebola lab at Fort Dietrich while the lab was hot and they were investigating an X virus—a virus that hadn’t yet been identified. I felt that I was in effect interviewing Ebola even though Ebola couldn’t speak.

Wan Yang, epidemiologist: We know that Ebola tends to hit places that are really resource limited and as a result, they don’t have the health facilities and doctors and nurses to treat patients. They also don’t have the good disease surveillance that has really enabled us to make decisions as to how to control the disesae. To deal with the challenge in terms of lack of information, part of my work has been to use mathematical modeling to try to figure out key disease characteristics. Where is the source of the infection? Where is it going to go and how quickly? And once we have a good model we can also use that to make predictions about the number of future cases and how the disease is going to spread spatially. Hopefully we can then use those predictions to help send very limited resources to places most in need.

THE HOT ZONE stars Julianna Margulies, Noah Emmerich, Liam Cunningham, James D’Arcy, Topher Grace, and Paul James. Episodes one and two premiere on National Geographic on May 27, with the rest following over May 28 and 29.