Choreographer and dancer Emily Coates, who directs the dance studies concentration at Yale University, has been collaborating with particle physicist Sarah Demers for the past eight years. In addition to co-teaching a class at Yale, Coates and Demers have made a short video together, and co-authored a book called Physics and Dance that will be published by Yale University Press in January 2019, which was supported in part by the Alfred P. Sloan Foundation. In November 2018, Coates’ performance piece “A History of Light,” which she developed with artist Josiah McElheny, premiered at Danspace Project in New York and featured Sarah Demers as a performer. We spoke by phone with Coates about her performance, class, and forthcoming book.

Science & Film: Why did you choose to cast Sarah in your Danspace piece “A History of Light”?

Emily Coates: There are a couple of reasons. One, almost everything in the “History of Light” is repurposed: from the sky plates that make up the magic lantern in the first scene, to Balanchine’s choreography, to clips from early Russian silent cinema. I also imported my collaboration with Sarah, which acts for me as a kind of found object in the work. I sometimes jokingly say that Sarah is one of my muses, because she’s a really great performer. I think strategically about how to direct her and give her material that she feels comfortable performing. 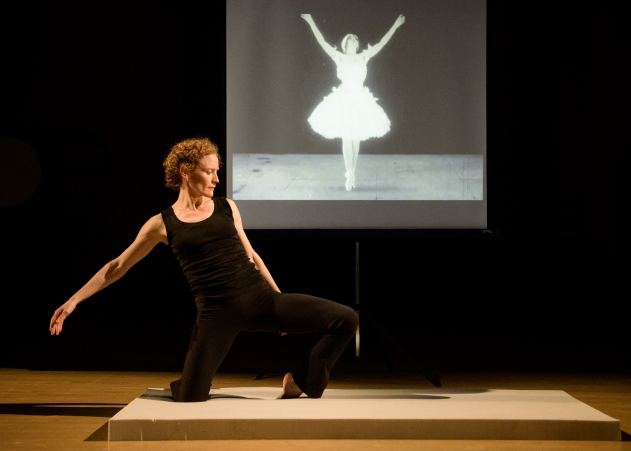 S&F: When she and I spoke, she described your direction as “task oriented.”

EC: Yes, I first learned her range when I created the evening-length piece “Incarnations,” which premiered in 2017 at Danspace Project and was more directly based on our collaboration. Figuring out how to craft her movement and speech in that work was a creative problem, and I mean that in a good way; it forced me to brainstorm different possibilities that I then built into the composition. She hates memorizing text, so I come up with ways to let her riff—within my parameters! And I give her actions to fulfill. She fit neatly into “A History of Light,” my next piece, because the themes there deal with overlooked women artists and scientists. Having a flourishing female physicist narrate this account of women who have been passed by in history felt thematically appropriate.

S&F: One of the things I talked with Sarah about was how your collaboration in the classroom at Yale has impacted her physics practice. From your perspective, how has your collaboration changed how you are as a dancer or choreographer?

EC: Our collaboration has changed entirely how I think about collaboration. Our work has been driven by a willingness and desire to be in conversation and to be rigorously creative about that conversation, and tremendous enjoyment in working together. That core has let us rove around in mediums, from the classroom where we started, to the science-art video we made in 2013 called THREE VIEWS OF THE HIGGS AND DANCE, to writing a book together. Our ongoing exchange has fed my imagination in all sorts of ways. It has also made me more interested in, and more critical of, the ways that dance and science have been put into conversation. Knowing the pitfalls makes me want to think in performance about how I can do it differently. And in our collaborative work, Sarah and I are both interested in how we can juxtapose our knowledge to make it mutually illuminating—while retaining a rigor and complexity.

S&F: Could you say a little more about the landscape of science and dance exchange?

EC: I wrote about that topic in an essay called “The Poetics of Physics in Dance.” At the most basic level, the aesthetic value of the dance can be seriously compromised. Worst case scenario or me is when the scientific phenomena is simply depicted literally in movement, which does not allow for more complex choreographic composition to do its thing. Or, on the flip side, the dance can look like any other contemporary dance, and the dialogue with the science seems to have left no mark at all on the artistic process. A more successful example for me is William Kentridge’s performance “Refuse the Hour,” which he created in collaboration with Peter Galison [a historian of science], the composer Phillip Miller, the choreographer Dada Masilo, and video artist Catherine Meyburgh. I write about their work in the essay as an example that helps us to think about the criteria for a more successful exchange.

In the end, dance is a terrible communicator of science, if you are looking for it to spit back out at you the scientific concept in a legible form. What dance can do very, very well, however, is intensify the scientific idea—make it more sensible, palpable, viscerally felt, landed, and patterned in the choreographic complexity and in the human body—and situate the science within historical and cultural context. Dance artists have been tremendously adventurous in their manipulations of energy, space, and time. Sarah and I discuss this in our book. In the performance pieces I’ve made, I try to get around the usual approaches to science dance by using the methods of juxtaposition and collage. I press up my own dance histories against different scientific ideas—sometimes embodied in my collaborator Sarah!—and see what happens. 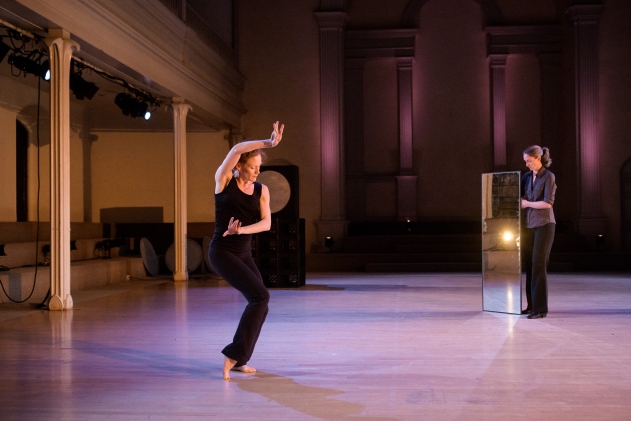 Emily Coates’ dance work has been commissioned and presented by Danspace Project, Ballet Memphis, Performa, Carnegie Hall, Works & Process at the Guggenheim Museum, the Baryshnikov Arts Center, and more. In 2017, her first evening-length piece called “Incarnations” premiered at Danspace. Her book Physics and Dance, co-written with physicist Sarah Demers, will be published by Yale University Press on January 22, 2019. On January 17, New York Live Arts will host a reading and book signing with Coates and Demers.