Lucy In The Sky, A New Film About Autism, Premieres By Sonia Shechet Epstein | November 8, 2018

Starring Whoopi Goldberg and Zoe Colletti, the new Sloan-supported short film LUCY IN THE SKY debuted for audiences at NYU on October 18, with members of the cast and crew in person. The film is about autism, and what it is like for kids and families who have a relative impacted. It is written, produced, and cast by Jen Rudin who received a Sloan grant through the NYU program for a TV version of the story.

The 11-minute film follows Lucy, a young girl on the autism spectrum who is about to start a mainstream high school. She has a twin sister (played by Quinn McColgan), which makes their family eligible for a genetic study. Lucy’s parents are played by Catherine Curtin and Danny Burstein, and her younger brother by Adrian Raio. “When I heard about the Sloan grant and the opportunity to get out of my comfort zone and work on something that has a science origin, I thought, let’s try the challenge,” Rudin said at the screening.

With the Sloan grant, Rudin was assigned a science advisor—Melissa Nishawala, Medical Director of the Autism Program at the Child Study Center at NYU Langone Health. “Mostly what I get to do is work with families everyday. I know many, many families with kids with autism and so I’m the science advisor. I’m here to make sure the science is right when it comes to autism. What is autism? What does it look like? [What are] the social struggles?” said Melissa at the screening.

The film’s focus on autism is what attracted some members of the cast and crew, who spoke about why. Quinn McColgan, who plays Lucy’s twin sister and who has previously been in such films as MILDRED PIERCE, said,

“My best friend, his name’s Sam, his twin brother has autism. It was crazy to get this script and read it; it’s everything that goes on in their lives. It’s a challenge. You don’t even scratch the surface when you look at just the child that autism is affecting. It’s also their family members. It’s the challenges they go through every single day. […] So many people aren’t familiar with the characteristics that go along with autism and so they never know how to treat kids or even adults with autism.” 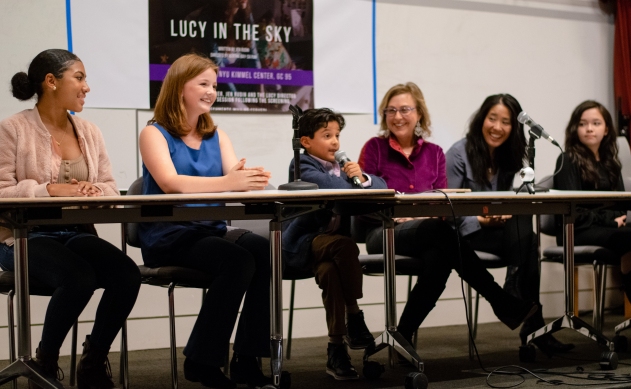 The director, Bertha Bay-Sa Pan (whose directorial debut FACE premiered at Sundance in 2002) confessed that when she read the script, she was in a serious relationship with someone who had a severely autistic daughter. The daughter was “starting high school and was in the middle of getting a genetic test that very weekend that Jen sent me the script. [She] had a younger brother. When I was reading the script I just thought, oh my god I have to do this.”

Melissa Nishawala commented on the portrayal of Lucy from her perspective as the film’s science advisor. “Here is a kid who is obviously bright and verbal and that is really struggling socially. I thought Zoe [Colletti] did an amazing job of being able to convey a lot of information without being able to convey the facial expression, the eye contact, the gestures, etc. that go with it. She did so in a way that didn’t look like a stereotype, because every kid on the spectrum is different and we don’t want to keep perpetuating stereotypes. Lucy has math skills that are probably beyond her verbal skills. She has this tendency to keep talking about facts that she knows—numeric things, information. She wants to say [these things] but isn’t necessarily waiting for a response or that reciprocal interaction that’s absent or much curtailed in people with autism. For me as a scientist it rang true; what was being portrayed on screen could be a kid in my office. As far as prognosis, think about the resilience of a kid. She has a supportive family—it’s a bit tumultuous, and yet they clearly love her and are in her camp and watching out for her. She has a treatment provider, and now she’s going into a mainstream school. This means that going from a specialized to a mainstream school she must have graduated and felt able to do that, and now it’s all about the supports. Her prognosis depends on making relationships in high school.”

The full discussion is available to watch online. LUCY IN THE SKY has been selected to show at SF IndieFest, happening on November 10. Jen Rudin hopes to develop LUCY IN THE SKY as a television series with the same characters. Stay tuned to Science & Film for news.