Loïe Fuller, the American modernist dancer known for her inspired use of dramatic lighting techniques, once tried to brighten the very clothes she danced in. Living in Paris at the turn of the 19th century, she was aware of experiments with radium which Marie and Pierre Curie were conducting–especially after they won the Nobel Prize in Physics in 1903.

Fuller danced with a skirt she hung from her neckline, and is most widely known for her patented Serpentine Dance in which she swirls fabric to create morphing shapes. A short, hand-tinted film of a dancer performing Fuller's Serpentine Dance was made by the Lumière Brothers in 1897 and is one of the earliest color movies. Her Radium Dance is less well known. 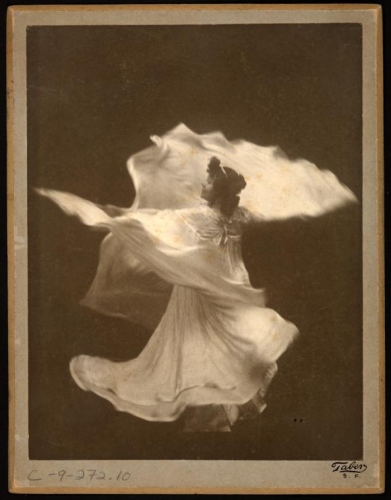 Around 1905, Fuller wrote to Marie and Pierre Curie to see if it were possible to make a costume entirely out of radium. Marie Curie responded that she would not advise such an endeavor; it would be very expensive. According to the biography Madame Curie written by Curie’s daughter Ève, Fuller was so touched by Marie Curie’s sincere response that she asked to perform for the Curies at their home. So began a friendship of mutual admiration.

The New York Public Library has in its collection one of Loïe Fuller’s notebooks: 59 pages titled “Lecture on Radium” written in January of 1911. “If Radium can bring to our vision those things which we cannot see (as it does the atom),” wrote Fuller, “its influence cannot be measured on materialists who say, ‘I’ll believe when I see.’ If it can show us the soul as it leaves man by registering it on the photographic plate, if it can be the means of photographing our imagination, so that the eye can see it, what will we not believe, we materialists who think that only things we realized with our human senses are real.” 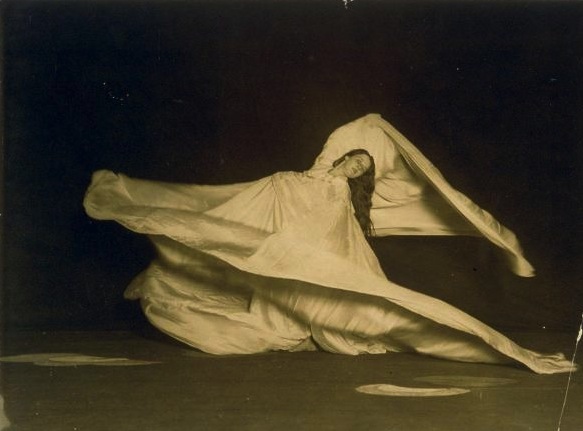 Though she did not make her radium costume, Fuller did find a way of lighting her dress by using fluoresced salts. With the help of Thomas Edison and the assistance of Marie Curie, she made a black gauze dress speckled with calcium. The Los Angeles Herald in May of 1904 described the dance: “The tissue of twinkling stars floats about, circles, sweeps along the floor, or is wafted up until it assumes the shape of a great luminous vase. The dancer’s face is never seen, her form being vaguely outlined by the glowing lights. […] The visitors are brought back to reality out of ghostland, and, being given an opportunity of examining the dancer’s dresses, find that they are made of a peculiar kind of silk, completely impregnated with fluorescent salts.”