Touch the Sky: Art and Astronomy is a group exhibition at Vassar College curated by Mary-Kay Lombino bringing together works from 1865 to 2016 which explore the cosmos. American artist Nancy Graves’ 1974 black-and-white film, REFLECTIONS ON THE MOON, which she created from over 200 stills from NASA of the moon’s surface, is on view. Science & Film spoke over the phone with Lombino from her office in Poughkeepsie, New York, about her inspiration for putting together an art show about science.

Science & Film: Did you work with any science professors on campus to put Touch the Sky together?

Mary-Kay Lombino: Yes. His name is Fred Chromey, and he has been in our astronomy and physics department for a long time, so he knows the history here. This was an exhibition that was meant to celebrate the sciences on campus. I chose astronomy both because I think it’s really about observation, looking, and imaging, much like art is, and also because we had this rich history of teaching astronomy on campus. Maria Mitchell was the first professor hired at Vassar and was also the first American female astronomer. By 1847 she had already discovered a comet, and then she was hired at Vassar in 1865 to teach astronomy. Part of her methodology of teaching, which is continued even today, is this going-to-the-source kind of teaching. She began a strong tradition of observational astronomy on campus. Fred Chromey, who has now been in that department for something like 30 years, has continued that idea. The Observatory on campus is still actively used in teaching here. I tapped into some of the things Fred was teaching. What I decided to do is create a slideshow that included images that Vassar students have taken with our telescope. This is on an iPad in the galleries, so the students are represented that way. 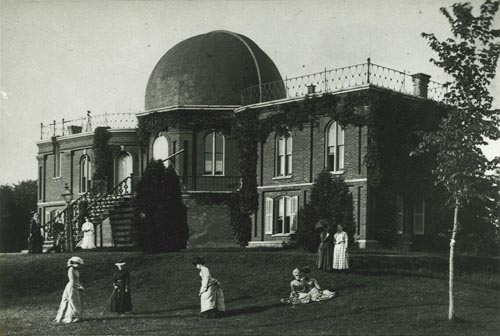 S&F: Have you organized any walkthroughs of the exhibit geared toward students?

M-K L: I did a walkthrough of the exhibition with Fred Chromey for the students. We were looking at two different images of the moon: the one from 1865 by Lewis Rutherfurd and one that was done practically 100 years later by David Malin that showed a similar side of the moon. [Fred] helped me figure out that the moon image had been rotated and that one picture showed the moon waxing and the other showed the moon waning, but that they were both in the first quarter of the moon. When I look at an image of the moon made by an artist, I think about intention and the aesthetics of the picture, and what [Fred] sees is, what section of the moon it is. So we have this very different point of view looking at the same image.

A similar thing happened when we were looking at this piece by Michael Benson which shows Io, which is one of Jupiter’s many moons. I saw this very rich, textured surface that was beautiful, and he saw all the different volcanoes that are on Io and explained why. This is how I came up with the label that explains why there are so many different volcanoes on that surface. [“The gravitational pull of Jupiter combined with a regular counter-pull by its sizable sister moons, squeezes the moon, heating its interior and forcing lava to the surface in continuous eruptions from more than 400 active volcanoes.”] So, [Fred] definitely had an input, which is great. And then last week, we all got to go over to the Observatory and look at Jupiter and we could see Io circling around Jupiter and we were able to relate that back to the exhibition, so that was amazing. We are doing that again on June 23. 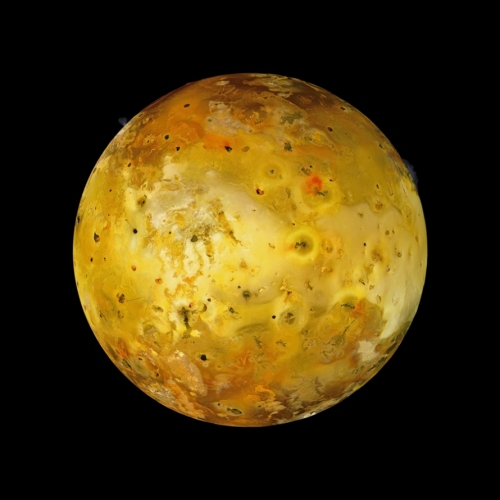 S&F: One of the pieces is a film piece by Nancy Graves. Why is that the only film piece on display? Does film capture the cosmos differently than other mediums?

M-K L: It definitely does. I wish I could include more film in all the shows I do, but we don’t have the best place to show it. We have a nice flat screen with speakers which is not ideal because I prefer it to be in a black box theatre, but at least we have that. So, I’m usually able to include at least one film. There was another video piece that I really wanted to include by an artist named Kevin Cooley who has a two-channel video which is meant to be shown in a corner with the seam of the two screens hitting in the corner. One screen shows the moon rising and setting, and on the other it has the sun rising and setting, and at one point they create one single orb in the middle. He also took the sound from NASA’s soundtrack of the sun and all the sound it makes as it burns its own surface.

Nancy’s piece is wonderful. I especially wanted to feature it because she went to Vassar and she had this really sustained interest in being inspired by the moon. She is one of the many artists in the exhibition using materials that came right from NASA. She was working at the Goddard Institute at Columbia University, an offshoot of NASA, and she was able to go through their archives and look at tons of photographs of the moon, many of which she selected for this film, and then took her camera and panned over it. In watching the film, it feels like you’re in a spacecraft hovering over the surface of the moon. But, because it was made in 1974, it has a very retro feel to it. It definitely harkens back to that moment when we were having that space race with Russia and we were so determined to get to the moon and put the American flag on the surface. The soundtrack is just a fan oscillating, and she heightens and lowers the frequency of it so it sounds completely otherworldly. If you hear this sound you think a UFO is landing or something. It was made in such a low-tech way and that’s one of the reasons I love it. 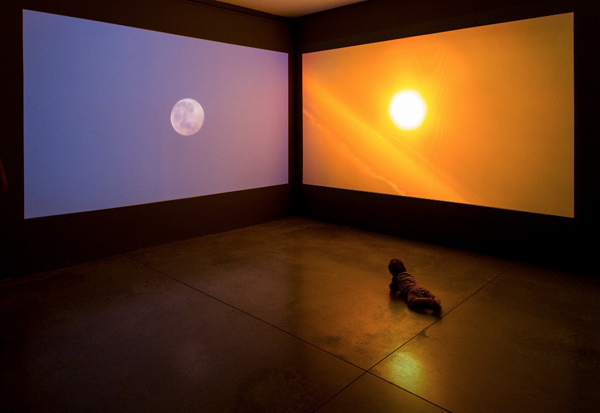 S&F: The sciences are so concrete, and one of the things you said in the exhibition brochure was that you gravitated towards works which were more conceptual. Why is that?

M-K L: I think the reason is that much of this art is not just about aesthetics, it begins with an idea and then it’s manifested through an aesthetic project, but because it begins with an idea it becomes more conceptual. I believe that art and science arise from the same part of the brain, because they both involve imagination, curiosity, inspiration, and you have to have a sense of wonder and dare to have new ideas in both science and art. I found that there was more crossover than I thought there would be when I really started looking at the art.

S&F: Did you have any exhibition models you were looking at, at the outset?

M-K L: There was a great exhibition, I didn’t see the show, but I had the catalogue, and this happened at Bowdoin in 2015. It was called, Past Futures: Science Fiction, Space Travel and Post-War Art of the Americas. This show was a lot more comprehensive than mine, but it was an interesting comparison.

S&F: I wrote about the exhibition Life Itself which asked artists, "what is life?" I thought this was a great entry point for artists to enter a scientific discussion. It is interesting to think about what artists can lend to a conversation about the cosmos.

M-K L: That’s right. So much of what we know comes from our imagination because we haven’t seen it, and we might never see it with our own eyes unless we start doing a lot more space travel for the lay person. So, we’re just this very small part of the cosmos and our ability to really, truly understand it is close to impossible if we don’t use our imaginations.

S&F: I saw that you have an initiative at Vassar called “Bridging” and I am curious if that is changing the pedagogy of how arts and sciences are taught?

M-K L: It is a really good question. Of course, many college campuses over the past 100 years have just become more and more siloed. The physics people only talk to the physics people. Vassar is this place where students really want to learn in this more interdisciplinary way, so there have been a number of initiatives to encourage that. Because we are not part of one department, we are an art museum, we have been able to participate in that a lot. The Andrew W. Mellon Foundation has funded a position here called the Coordinator of Academic Programs. That position allows us to collaborate with many different departments and bring two or maybe even three or four disparate departments together to be in conversation about objects in our collection. So while the teaching maybe hasn’t changed that much, it does end up in the syllabus where a physics major might come to the art museum. So, it shakes things up a bit to teach in a more interdisciplinary way, and we’re very happy to be able to be part of that.

The exhibition Touch the Sky: Art and Astronomy, is on view now through August 21, 2016 at Vassar College’s Frances Lehman Loeb Art Center. Mary-Kay Lombino’s next exhibition will be about the artist Mark Dion.