Science Consultant Melanie Windridge on THE MAN WHO FELL TO EARTH By Sonia Shechet Epstein | July 20, 2022

Showtime’s Emmy Award-nominated series THE MAN WHO FELL TO EARTH stars Chiwetel Ejiofor as an alien who arrives in New Mexico with a mission to save his species. To do so, he must convince a cold fusion expert named Justin Falls (Naomie Harris) to help him build a quantum fusion energy source. The series is loosely a sequel to Nicolas Roeg’s 1976 film of the same name, starring David Bowie, whose character Bill Nighy reprises in the series. Both are inspired by the novel by Walter Tevis. THE MAN WHO FELL TO EARTH engaged physicist Dr. Melanie Windridge as a science consultant on the script and production, ensuring that the physics of fusion was plausibly portrayed. We spoke with Dr. Windridge about the process, the probability of achieving fusion, and its depiction in the series.

Science and Film: What was your role as a science advisor on THE MAN WHO FELL TO EARTH?

Melanie Windridge: I was approached by Adrian Kelly who was one of the producers on THE MAN WHO FELL TO EARTH. He found me because I wrote a book called Star Chambers, which is a very basic introduction to fusion energy for people who have never heard of it—I wrote it for teenagers. He read it and thought I might be able to talk about the science of fusion. I thought it sounded like a really interesting thing to be involved with.

THE MAN WHO FELL TO EARTH is a science fiction series, but they wanted to make sure it was grounded in reality. What they are talking about [in the series] is quantum fusion which is not part of the general way we are talking about fusion. They were imagining something that was impossible and I saw my role as making sure that the physics principles were there so you could imagine extrapolating to the point they want to get to in the series. Adrian told me once that they want something like “measured insanity.” 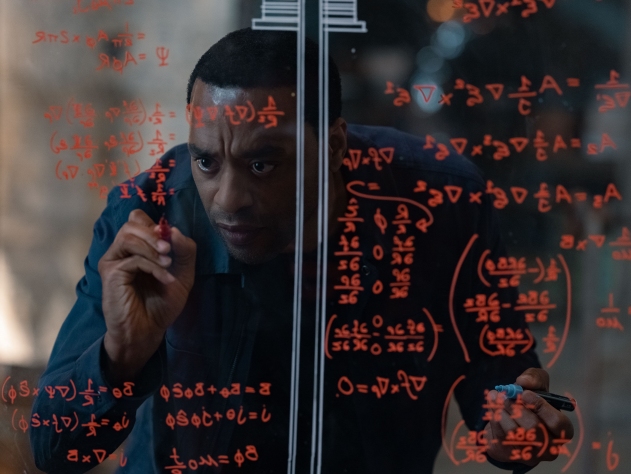 Without going into all the details, there are different approaches to doing fusion. A little bit of background: what you’re trying to do with fusion is to replicate the energy source of the stars on Earth to make a clean, abundant energy source. So, you need to create the conditions that you find inside stars and then harness that energy. To get those conditions, some people use lasers to compress a small pellet of fuel to very high density and temperatures. You can also use a magnetic field, where you have a big cage that traps this hot fusion fuel that is in a plasma state, which means it’s an electrically charged gas. These [methods] are very distinct, so you don’t want the dialogue to mention magnets if they’re using lasers. I read over the script and thought, what would be the best approach to achieve what they’re trying to do, and if I pick that approach, can I imagine a pathway to get to this crazy scenario from where we are now? I had to make a story up in my head that made sense to me in terms of the physics, then I used that story to adjust some of the dialogue in the show.

S&F: Which approach to achieving fusion did you choose?

MW: I chose magnetic fusion partly because that is what I am most experienced in, but that wasn’t the only reason. Late in the series, they bring in music. The particles inside the plasma all have their own characteristic frequency of movement and rotation so [if] you put in waves at particular frequencies they will resonate with the particles inside the plasma and you can use that method for heating. To me, that bit with the music matched better with when you’ve got a plasma in a magnetic cage.

S&F: Did you consult on the visual representation of quantum fusion in the show?

MW: I spoke with the design team. I pointed them to pictures in the public domain of magnetic devices called tokamaks—a Russian acronym and the most advanced approach to fusion. There are lots of tokamak machines around the world and pictures they could draw inspiration from.

Naomie Harris as Justin in THE MAN WHO FELL TO EARTH, “New Angels of Promise.” Photo credit: Courtesy of SHOWTIME.

S&F: One of the interesting discussions in the series has to do with how the world economy relies on maintaining the fossil fuel industry. What are your thoughts on where fusion sits within the energy landscape and how realistic achieving it is?

MW: I’m glad you asked because I think things have changed a lot in the last five years, partly because of people’s attitudes towards climate change and net zero. There are now targets and countries who are committed to achieving net zero, so there is a lot more seriousness around this, therefore there are lots of different technologies being investigated. On the fusion side, we have seen a huge growth on the private industry side of fusion. Historically, a lot of the research was done in government labs. In the last ten years, there are more private companies accelerating the research—more than half of the private fusion companies in existence today were founded in the last five years. You’ve also seen a lot of private investment, so rather than government funding, these are real people putting their money into fusion. Private companies usually try to do things smaller, cheaper, and faster, and generally with more people working on a problem things will happen more quickly.

We are also seeing partnerships between the private companies and the public labs. So, the fusion community as a whole—be it private or public—is starting to come together to drive fusion forward and that’s what is really exciting to me. I run a company called Fusion Energy Insights which aims to help people keep up to date with developments in the fusion industry so they can see opportunities for their businesses. Before that, I was working for the Fusion Industry Association, and I am also a consultant for a private fusion company called Tokamak Energy. I’m interested in the way an ecosystem is coming together that will drive us towards commercialization faster, because I believe the world needs fusion, not as the exclusive energy source but as part of an energy mix.

Fifteen years ago, if an alien had come to Earth with fusion, it was a very different landscape and I actually would have been worried that fusion would have been bought up by an oil company and shut down because it would have been too disruptive. I don’t think that’s a concern now because the fusion industry is too diverse; there are too many companies taking different approaches, and also the energy companies, the oil companies, they realize that because of climate change and net zero they need to do something different. There are oil companies investing in private fusion companies, and that’s exciting because they are seeing it as a way to change and still be an energy business in the future. If an alien came to Earth now with fusion technology, I think people would embrace it rather than trying to shut it down. 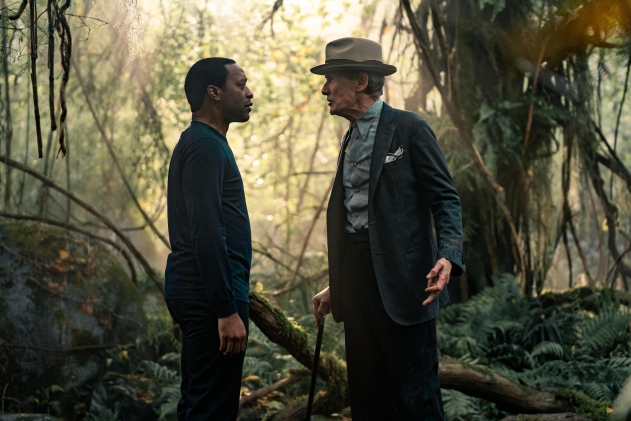 (L-R): Chiwetel Ejiofor as Faraday and Bill Nighy as Newton in THE MAN WHO FELL TO EARTH, "Cracked Actor." Photo credit: Aimee Spinks/SHOWTIME.

S&F: So you see fusion functioning as part of the energy sector transforming, alongside solar, wind, nuclear?

MW: The transition is going to take time—there are predictions that even at 2050, if we hit our net zero targets which is a really big if, predictions show that 25% of electricity will still be generated by fossil fuels. That’s only electricity, without thinking about things like transportation or industry. We are not suddenly going to switch off fossil fuels. Even if we could do fusion tomorrow, it would probably take decades to roll out globally. It is going to be a slow fade into these new energy sources, so at the moment we need everything we can get our hands on because fusion isn’t ready yet and we need to be building renewables, we need to be building nuclear fission, and then when fusion comes online it will start replacing some of those.

Also, energy demands are only increasing, so it’s not like we’re going to say: oh well we’ve satisfied all the demands and we don’t need fusion now. Demand is only increasing. I see fusion as being necessary alongside other energy sources. Even if we go 100 years into the future, maybe fusion would get a larger and larger market share, but there will still be situations and locations where a particular energy source is better suited. Fusion would be good for cities where you have high density of people and not a lot of space, because you can produce a lot of energy without a lot of space [using fusion]. Somewhere more rural, you might want renewables. Renewables like wind and solar have variability so you need to have some non-variable generation so you can have a reliable electricity grid. I think we’ll find different energy sources are suited to different things, and there is room for a mixture.

S&F: For people watching the show who are interested in learning more about fusion, where do you recommend they look?

MW: There are a few good books out there. The one I wrote is a very general introduction, so it’ll tell you about the basics. If you want something a bit more like popular science there is a book called The Star Builders by Arthur Turrell that came out last year. There are also videos on YouTube. Fusion News is a roundup of the biggest stories in fusion. Tokamak Energy used to make a huge amount of videos so that’s on their YouTube channel. All the public laboratories—like ITER— have educational pieces on fusion as well.

S&F: Hearing you mention YouTube and thinking about THE MAN WHO FELL TO EARTH, I wonder whether you think there is something particular about fusion that is well-suited to film?

MW: I think plasmas can look quite cool. It’s an electrically charged gas that is usually colorful. An atom has a nucleus and electrons around it, and a plasma is when the electrons are stripped away from the nucleus of the atom to become free charges. When an electron comes back to an atom and recombines, it releases light. Since plasmas always release light, they can look very pretty.

Everyone is actually familiar with plasmas even if they don’t know it—the sun is a plasma, flames, neon lights, the Aurora Borealis. They’re pretty and dynamic and chaotic. In a fusion machine, they’re not as beautiful because they are contained, but you can still see a flash of color or whisp. For the show they worked with the visual aspect of it and made it very dramatic, which is one thing I would caution people about: fusion is inherently very safe. Just the other week, the UK government announced it would be regulating fusion differently than nuclear fission, it won’t be regulated like a nuclear facility, it’ll be regulated as an ordinary industrial facility because of its safety profile. But dramas always dig up the dangerous aspects, so be prepared for explosions and death! Which may not be a true reflection of the technology.

Cover image: A still from THE MAN WHO FELL TO EARTH, “Moonage Daydream.” Photo Credit: Courtesy of SHOWTIME.