The multiple prize-winning documentary GEOGRAPHIES OF SOLITUDE is an embedded portrait of researcher Zoe Lucas and her life on the 20-mile-long Sable Island, which she has taken care of and lived since 1971. The changes on Sable Island, which Lucas methodically tracks, serve as a bellwether for the condition of the North Atlantic Ocean. The film is Jacquelyn Mills’s debut feature-length work. In the making of the film, she experimented with multiple innovative techniques specific to life on Sable Island, including developing 16mm in materials such as horsehair, seaweed, and starlight, as well as composing music with input from the island’s beetles and other creatures.

GEOGRAPHIES OF SOLITUDE won three prizes at the 2022 Berlinale Film Festival where it made its world premiere. It has gone on to play at Hot Docs in Canada where it won Best Canadian Feature and Mills won Best Emerging Director, to win the Grand Jury Prize in the International Competition at South Korea’s Jeonju International Film Festival, and many more. We spoke with Mills from her home in Cape Breton, Nova Scotia, between festivals.

Science & Film: How did you find Sable Island and Zoe Lucas?

Jacquelyn Mills: I grew up in Nova Scotia and Sable Island is really well known here. There is a herd of wild horses, there is the largest colony of grey seals in the world, it’s known for its shipwrecks, and there are fantastic stories about Sable Island. When I was really young, I remember seeing a news report about this woman—Zoe Lucas—who lives on this mythical island and has dedicated her life to studying and researching the flora and fauna there. I remember as a young girl being totally captivated by that story; it awoke something in me and stayed with me. Throughout my life I would hear about it here and there, and it wasn’t until I finished my last documentary IN THE WAVES that I actually considered making a project there in collaboration with Zoe Lucas. 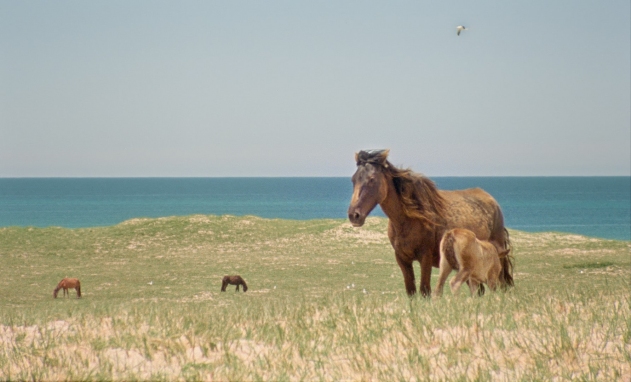 S&F: Was it challenging to convince her to participate?

JM: When I first came up with the idea to make the film, I thought it was a mission impossible because I was sure she’d be very difficult to reach and even if I did [reach her], how would I convince her? I had a lot of serendipity on my side because as soon as I started to put this idea out there, I realized we had a mutual, trusted friend. That helped so much. That friend introduced us and shared with her my last film. She was intrigued and agreed to meet with me on mainland. I explained my intentions of creating a film that intimately involved Sable Island, but that I wanted to do it with her. Her dedication to the island is what drew me to that project. Showcasing her work, using her invaluable knowledge of all these secret sounds and sights that she’d gathered over a lifetime of being in one place, that was what inspired me. It was the legend that attracted me to her story but it was everything else—the details, the hidden parts of that place—that really ignited this project and made it what it is.

It ended up being a really big adventure that took me three times to Iceland on an artist residency, three times to Sable Island on a charter flight, doing shoots off the island, all these experiments…it took on a life of its own once it started, but I attribute that to the spirit of Zoe’s curiosity and the breathtaking experience of being on Sable Island. You really understand why she did what she did. It’s a remarkable way to live a life.

S&F: The way that she has taken care of the island seems to have shaped its character too.

JM: That kind of energy is very uplifting to be around. It affected my own practice because when you witness that dedication, I felt a wish to rise to the occasion and imbue my work with a similar quality and attention to detail as I was being surrounded by with Zoe. I wanted to honor that the best way I could and through my own practice. 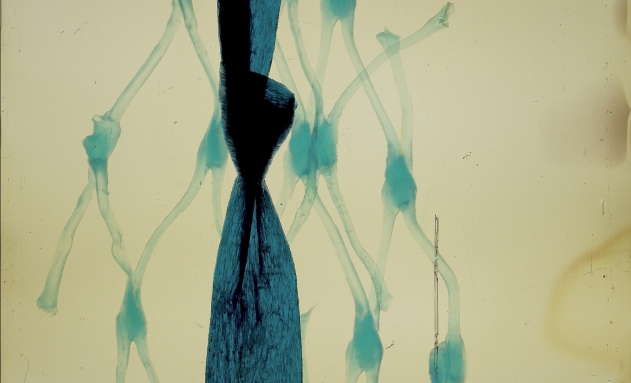 S&F: The ways that you collaborate with the island in the film—using contact mics and developing film in the materials of the island—had you done anything like that before?

JM: You know what? Never [laughs]. I had never even hand-processed before. I went to film school in Montreal, and we shot on 16mm, but I never hand-processed my work. But that experience set me up for using that format. I appreciate the ritual that goes into shooting on film. Not every project is suited for film, but with this project once I learned that it was possible to hand-process film in organics, it opened up a universe for me. I was pretty shocked at the number of experiments [in hand-processing film] that worked out; I think every single one actually turned out and a touch of each one is in the film. It’s pretty tedious work, hand processing. You have to be patient. It’s not like 35mm. With 16mm even three minutes is hundreds of feet of film, so there is a mound of material you’re contending with. Every time I went to do these different experiments I would always wonder about it because it took so long and sometimes I would shoot things on the island and bring it all the way back and think I might lose it all, and I thought, am I really this dedicated? [laughs] But I was just so curious. I thought, why not? This was the intention of the film so I’m just going to take that risk and try.

S&F: There is something about that process that sounds similar to Zoe’s spirit.

JM: It is an interesting correlation because I was learning all this as I went and that has been Zoe’s approach as well. That’s why I ended up going to the extent I did with the experiments because it’s empowering to see someone taking matters into their own hands to the extent to which Zoe does. I felt like what I was doing was a drop in the bucket compared to her so why not?

S&F: In terms of the archival footage in the film, was that material that Zoe pointed you to, or how did you find that?

JM: The archives in the film are dear to my heart because on the island I put a lot of emphasis on being present and not necessarily trying to consume the island through images. Sometimes when you make a film, it can feel like you just need enough coverage. For this project, I wanted to feel first and film after, so that was part of the reason I wanted to shoot on 16mm—because I could only shoot about ten minutes a day so every bit of film was very precious. There is a Herzog quote where he says, this can of film in your hand, pretend that’s the last roll of film, do something great with it. I had that spirit with me. Because I spent time being with the place, the animals, just observing and feeling what it is to be in such a remote, raw, and incredible natural wonder, I felt like the place had this timeless quality. No matter what season I was there in, if you were in between a dune or looking in a certain direction, it could feel like it could have been any time, any year. When I started working with archives, I remember it was a great treat, like Christmas day, recognizing a lot of the sites I had seen but also images I had taken in the footage because the island does have this quality that transcends time and space, and if you’re really experiencing the place, I think these common sights and sounds emerge.

In the archives I also loved the presence of the A-frame. The A-frame has sort of a character in the film. It’s a representation of a certain period of time when people existed on the island doing a specific project, living in a certain way. Now, this place is sinking into the dunes quite naturally, almost like one of the horse bodies. To see that place when it was in its glory, and seeing it now, it was just another of these timeless life cycles you experience on the island. It brings an awareness of impermanence; helps me reflect on what I am doing in this world and with this short life. It’s a powerful thing to witness these cycles so clearly on a daily basis.

S&F: Do you know how much of Zoe Lucas’s scientific work and methodology she taught herself, and how much has she been in conversation with a larger scientific community?

JM: She is generally self-taught. I don’t love to speak for Zoe because I don’t want to misrepresent her or say something that isn’t totally accurate. But as far as I know, when she first went to Sable Island, she joined a research team that was studying seals, headed by Henry James who was a professor at Dalhousie University. He was a mentor to her at first, teaching her about seal studies. She was there as a cook and would volunteer in her free time. I think he embedded this love of science into her and then it went from there. She stayed and it became this one long research project. To stay with something for that long is quite remarkable. Even me referencing those few experiments I did with the film… if you think about [Zoe’s] spreadsheets that span decades, it’s a whole other level of commitment.

It’s also a really interesting point that Sable Island is a platform for these studies because the marine litter generated there is mostly all generated off-island. I think that was a big draw for Zoe to do these long-term studies because you can monitor long-term trends in the Atlantic Ocean and know that there’s nobody on the island that’s generating [the trash]. 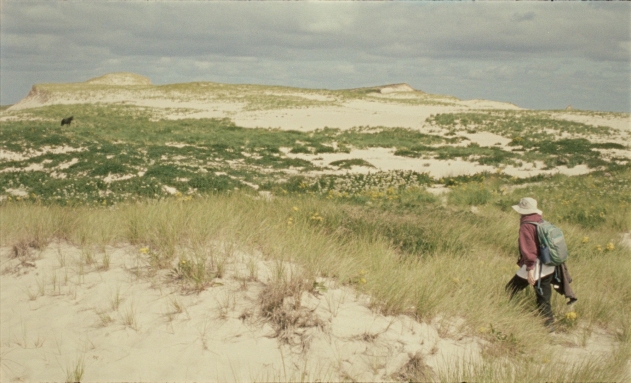 S&F: What is next for the film and for you?

JM: We are confirmed in 20 to 30 festivals coming up. We just played at Doc Aviv. I’m about to go to Switzerland to do an artist talk and for the Swiss premiere. Then, I don’t know what else I can say. I’m going to be focusing on my next project soon. My next project is going to be based in Iceland. That’s another place that has deeply impacted me for the wonder of the natural world there.

At a time of environmental crisis, it is important for me as an artist to focus on how I contribute to that conversation, coming from a place of healing. I really respect and value documentaries that are more educational or are teaching us about the destruction that’s happening, but the approach I am taking is more experiential and coming from a place of: if we can learn to love the natural world, maybe we’ll want to save it too. I am going to carry that over to my next film.