An Annihilation of Birds By Dorothy Fortenberry | May 17, 2022 This article was commissioned as part of the series Science on Screen: Extinction and Otherwise, to accompany the screenings of BIRDS OF AMERICA and ANNIHILATION on May 22, 2022 at Museum of the Moving Image.

The birds of John James Audubon are metal as fuck.

With their pointy beaks, sharp claws, and majestic wings, these are birds to fear. Birds to be in awe of. Birds who fight snakes and frogs, birds who win that fight.

In Jacques L’Oeuille’s 2021 film BIRDS OF AMERICA, the camera lingers on Audubon’s portraits of these birds, and, for a time, they fill the screen. It’s thrilling, and it’s also very weird. If you are, like me, a resident of the 21st century Anthropocene, you are not accustomed to being scared of birds.

You are not, if you’re honest with yourself, accustomed to being scared of animals at all.

In Alex Garland’s 2018 film ANNIHILATION, there are no birds, or at least none that we pay attention to. What life we do see is beautiful, unusual, and terrifying–an explosive metastasis. Inside a mysterious region known as “The Shimmer,” animal, plant, and human DNA mix and merge to create hitherto unimagined creatures: a plant that looks like the body of a person. An alligator with the teeth of a shark. A bear who screams the cries of a woman.

This mixing and merging of species alludes, perhaps, to the new flora and fauna that wait for us in our climate-changed future, as habitat loss and temperature change provide the means and the motive for experimental forms of interspecies mating.

But the hybrids in ANNIHILATION also felt, to me, like what you do as a director if you want to make an audience scared of an animal these days–you make it different, new, more of a mash-up. More like a person. We create monsters from our own fears. A quarter of our way through the twenty-first century, what and who can we really be afraid of?

BIRDS OF AMERICA and ANNIHILATION are both, in a sense, environmentalist movies. They track the loss and transformation of an ecosystem and the effects on the people who live there. The physical environments portrayed in both are even oddly similar–ANNIHILATION’s swampy, Spanish-moss drenched Gulf Coast with its mythical Louisiana town of Ville Perdue would fit right in with the Audubon’s visits to Natchez and New Orleans. All that’s missing is the oil tankers.

ANNIHILATION is environmental by association–outside of a brief mention of a fictional (but plausible) chemical spill, the changes to the physical world are caused by mysterious alien forces, and any resonances with contemporary life remain obliquely allegorical. BIRDS OF AMERICA is more direct in its engagement with present-day American politics. 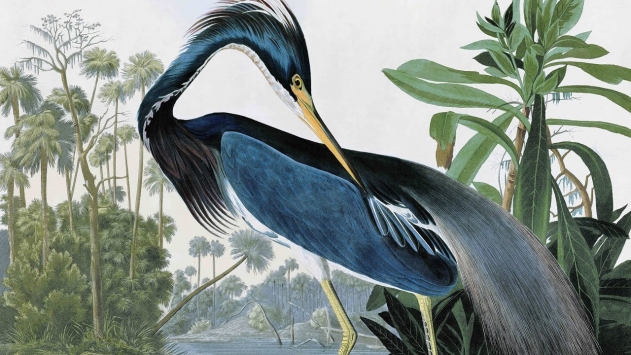 Still from BIRDS OF AMERICA

The bad guys of ANNIHILATION are aliens with beams of light.

The bad guys of BIRDS OF AMERICA are Andrew Jackson. Manifest Destiny. Oil companies. The–and I pause because this one was a twist–The Nature Conservancy. Human organizations that pursue and pursue and pursue. That push people and animals from land, that push land into the ocean.

The good guys are birds. Indigenous people. Audubon himself, of course. BIRDS OF AMERICA tracks Audubon’s journey down the Mississippi, interviewing members of the Ojibwe, Osage, and Houma nations, as well as residents of the Louisiana community between New Orleans and Baton Rouge famed for its environmental racism, known as Cancer Alley.

The film creates an explicit connection between the lives of poor people, people of color, and those of birds. It implies that Audubon, the environmentalist hero, felt similarly. We see photographs of enslaved people working in cotton fields. We learn that Audubon was the poorest man aboard when his boat arrived in Natchez.

You could watch all of BIRDS OF AMERICA and come away convinced that Audubon was equally opposed to ecological destruction and slavery.

You could watch all of BIRDS OF AMERICA and never learn that Audubon was born in Haiti.

You could watch all of BIRDS OF AMERICA and never learn that Audubon owned slaves.

When we look at Audubon’s birds now, we look with modern eyes that cannot imagine them as terrifying predators. Our minds cannot process the thought as we stare at the bloody frog in the painting: a bird did this?

Audubon, to Jacques L’Oeuille’s eyes, seems similarly innocent by association. A man with a sketchbook who mourns the loss of natural beauty, cannot be someone who also oppresses, who owns another person. An environmentalist did this? Well, yes. He did.

Everyone can be dangerous if you give them a chance.

In ANNIHILATION, the bad guys are knowable mostly by what they leave behind: whorls of unstoppable growth. Cancer has touched the lives of several characters (although what might have caused all this cancer remains undiscussed). And while the aliens’ handiwork is everywhere, like a menacing fabric art installation, their agenda remains opaque.

They slurp up the genetic materials of plants, animals, and us humans, turning out hybrids or doppelgangers. The final Big Boss showdown resembles nothing so much as modern dance between two graceful mimics. (This is a compliment coming from me.)

The good guys are all women, which seems Important, until it Doesn’t. Women don’t appear to be any better suited than men to the task of getting along with each other and not going insane. Or any better at not getting eaten alive. 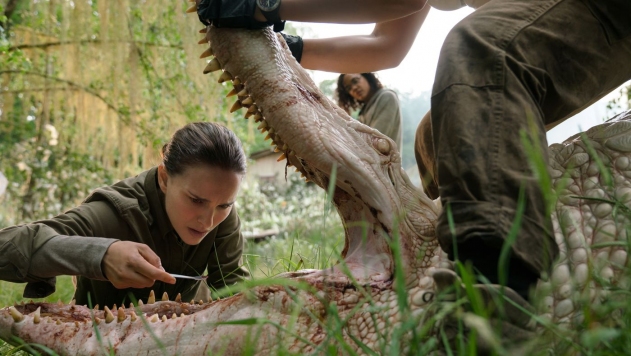 The film’s title provides a clue as to what these aliens might be after. At a pivotal moment, a character screams “Annihilation!” but it seemed, to me, an inapt cri de coeur. Although the cancer that the aliens are modeled on eventually grows and grows until its host is destroyed, the beam of light gives no indication that such a drastic outcome is their wish. They are changing the natural world, yes, throwing the genetic confetti in the air and seeing where it lands, but I didn’t feel like they were hellbent on ending things.

For one thing, the aliens have put an awful lot of effort into creation if their goal is merely to get rid of it all. Perhaps the aliens’ agenda is less Annihilation! and more Renovation!

The film ends with Natalie Portman’s character, Lena, surviving alongside a representative of The Shimmer. Whether he will be sublimated into our world or we into his remains an open question. But the world, some world, seems like it will go on.

A pointed and effective section towards the end of BIRDS OF AMERICA, set in the Audubon Zoo, shows what is described onscreen as a “white crocodile” (I think it is technically an alligator, but I also think I am not a reptile scientist). This majestic, otherworldly creature also appears in ANNIHILATION. In BIRDS OF AMERICA, the albino alligator is a tragic figure, held in oil-company-sponsored captivity, memorialized on a merry-go-round as harmless fun. In ANNIHILATION, the white alligator has mingled DNA with a shark and almost decapitates a member of the expedition with its multiple rows of teeth. According to BIRDS OF AMERICA, the white crocodile species is 250 million years old. It has survived for a very long time, but it can only survive in our world by being turned into something tame. It can only survive in The Shimmer by being turned into something monstrous.

Sometimes someone who appears to be a good guy also has a legacy of evil. Sometimes someone we should–by all accounts–be terrified of can only arouse our pity. Imagine telling a person in the 19th century that alligators weren’t scary unless you gave them extra teeth.

Several species of birds are already changing their DNA in response to our warming climate. The birds’ bills are growing longer to dissipate excess body heat. Unable to access air conditioning, the birds are using what they have–natural selection–to try and respond to the unfolding crisis around them.

My initial surprise at the fierceness of birds was, it turns out, misplaced and naïve. They are adapting more quickly and resiliently to climate catastrophe than many of the rest of us.

Birds may not survive what is coming, but they will not go down without a fuck of a fight.