From Academy Award-nominated filmmaker David France (HOW TO SURVIVE A PLAGUE, WELCOME TO CHECHNYA), the HBO documentary HOW TO SURVIVE A PANDEMIC chronicles Operation Warp Speed and the rollout of the COVID-19 vaccines between 2020 and the end of 2021. With the goal of shedding light on the scientific process and also the inequities in the global supply and distribution of vaccines, France interviews FDA researcher Dr. Peter Marks, Johnson & Johnson scientist Dr. Dan Barouch, scientist Dr. Kizzmekia Corbett who co-developed the Moderna vaccine, Dr. Glenda Gray of the South African Medical Research Council, and more. The film premiered on HBO on March 29 and is now available to stream. It was supported in part by a grant from the Alfred P. Sloan Foundation. We spoke with writer/director David France about the themes in the film, the global nature of the pandemic, and how COVID-19 relates to the HIV pandemic.

Science & Film: COVID has touched all of us in every aspect of our lives. Why did you choose to focus on the trajectory of vaccine development in HOW TO SURVIVE A PANDEMIC?

David France: It was obvious from the first minutes of the pandemic that it would take a vaccine to get us out the other end. It was also obvious that all the work that was going on around the vaccines was behind the curtains of science and industry, so I wanted to see if I could reveal that activity and record it for posterity. It was the biggest and most consequential scientific undertaking of our lifetimes. That’s why we chose to look very strictly at the vaccine itself, not just as a race but as a piece of essential scientific undertaking that the entire world was riding on.

S&F: In terms of the timeline and trajectory of making the film, how did you decide when to end the film?

DF: I started it as a piece of science journalism with all the humanitarian issues connected to that. What I was reminded of is that an effective vaccine is not going to help us in any way unless it leaves those factories and gets in syringes, and they make it all the way around the world. So that whole “last mile” concept of the vaccine was something we were advised immediately to pay attention to.

When the data surfaced about the vaccines’ remarkable efficacy only 11 months after the first description of the virus, I was moved to tears by the triumph of the scientists. Then, we waited for the triumph of political will to take us to the next moment of happy tears, and the goals that were defined by the public health world were that in the first year of availability 20% of the world’s population—meaning 20% of every country’s population—would be inoculated. So we set as a deadline of our film the end of 2021. We knew we’d be ending there, we just didn’t know what that ending would be. 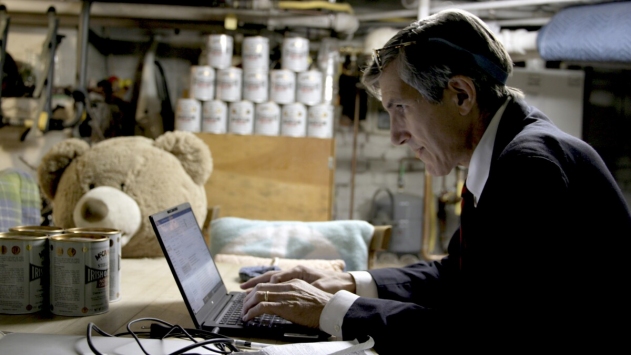 DF: As we were filming, our concern was mounting that we were going off the rails as far as equity. We saw all the chances for correction, and as you see in the film, we chronicled that through the World Health Organization [WHO] and the COVAX facility which was set up to try to assure equitable allocation of these vaccines, and we kept failing as a society. The failures were on the part of the pharmaceutical companies, many of whom seized an opportunity for a profit rather than true humanitarian justice, and on the political front, where politicians felt inescapably beholden to national interest. As we point out in the film, national interest is not creating a vaccinated island for any particular nation, because that creates these huge pockets of unvaccinated people around the world, where predictably we’ve seen the arrival of one variant after another that threatens even the vaccines that proved so effective to begin with. In fact, the best way to serve your national interest is what they spelled out as the goal for the campaign at 20% worldwide. Dr. Tedros of the WHO is quoted in the film as saying that we need to vaccinate some people in all countries, not all people in some countries. What we saw at the end of 2021 and today is just that—this disappointing and scientifically perilous hording of vaccines by the West.

S&F: Yet the West still has lower rates of vaccination than some other countries.

DF: I was expecting vaccine hesitancy, we all were. In fact, one of our motivations for making the film was to acknowledge that there are people around the world who feel a lack of confidence in these vaccines in part because they were developed and rolled out so quickly without explanation, so we try to pull that curtain back to show how it was done. But hesitancy itself did not turn out to be the major problem—it’s certainly a problem for the hesitant, unfortunately—but the problem we’re facing globally is because supply was restricted and horded.

S&F: You’ve screened the film in NYC and in Denmark at CPH:DOX, how is it being in places where there are radically different public health measures in place?

DF: We did a screening at HBO headquarters in New York, and we were at such a phase of the pandemic that we required same-day testing and unfortunately many people tested positive; we still have a hot pandemic in parts of the world. Then, to fly just a few days later to Copenhagen where there is not a mask to be seen… I wore my mask for the first day or two until finally someone at the hotel said, you should take that off. After two years to see and feel the post-pandemic future is exciting. Denmark is a highly vaccinated country unlike the United States, and you see the benefits of that. The public health authority there can say to people, you don’t have to worry about this anymore.

Subject-matter wise, the story focuses a lot on Operation Warp Speed in the U.S. which took the lead and made a fantastic contribution to the scientific undertaking—perhaps one of the few commendable legacies of the Trump administration. And yet it’s a global story, and to bring the film to audiences outside the U.S. and see their positive response to it makes me even more convinced that Warp Speed did have a global impact that should be celebrated.

DF: The cultural and political facts on the ground at the beginning of each pandemic are totally different, there is no comparison. In the first years of HIV the scientific community did not stand up. There was such complacency and a lack of fundamental human concern for the people contracting HIV that it never translated into a challenge to bench scientists and big pharma and national funding arms to do something. They were criminally slow to the fight and that’s what you see in HOW TO SURVIVE A PLAGUE: what it took to get those institutions to stand up. Fast forward 40 years and we see many of the same scientists still at work having spent all that time trying to find a vaccine for HIV, but we also see what they’ve learned and how they have become an engaged and even activist force in their practicing of bench science. So, there is a genetic connection between the two pandemics in that many of the same folks are doing the same work, and they are doing it in this radicalized stance which they learned through their interactions with activists with HIV. It was great to see how prepared they were to take this on, even absent interactions with grassroots activists. They have become the activists.

When this pandemic started, I began to look at where activism would be manifesting and I was impressed to see it was coming from the scientists themselves, and that gave us a lot more hope than we had for the last pandemic. Watching them find their candidate vaccines as quickly as they did was heartwarming and made me grateful to them for having stayed with it, recognizing that everything they’d done for HIV, although it didn’t give us what we were hoping for, prepared them to take on this new pandemic. Somebody once said to me that the entire architecture of the COVID response was built in HIV. To watch as these dedicated scientists finally get the victory they were looking for was incredible.