MOONFALL, the newest disaster film by INDEPENDENCE DAY director Roland Emmerich, takes place over the course of three weeks when two astronauts (Patrick Wilson and Halle Berry) need to work with a conspiracy theorist (John Bradley) to stop the Moon from colliding with Earth. Meanwhile, they uncover that the Moon is not the planet they thought it was. Though MOONFALL has a fantastical premise, the production engaged a number of science advisor to ensure some facts were plausible. Geophysicist and disaster researcher Mika McKinnon was one of these advisors. In addition to advising on MOONFALL, McKinnon has been a science consultant on TV series including STAR TREK, STARGATE, and NO TOMORROW. We spoke with her about about her role in the film, the need for collective action in the face of disasters, and why she enjoys being a science advisor. MOONFALL will be released by Lionsgate into theaters, including IMAX, on February 4.

Science & Film: Can you tell me a little about what your research is focused on, and how you got involved in MOONFALL?

Mika McKinnon: I’m a geophysicist, which is like being a mix of James Bond villain and MacGyver. You go around to beautiful, remote places, you improvise how to fix all your science that breaks along the way, and you very frequently blow things up. I’ve been working in the film industry for about 10-15 years, starting with STARGATE then working on everything from romantic comedies to political dramas. It was a dream project to work on MOONFALL because Roland Emmerich is the king of disaster movies! They’re so big and over the top, and that was really fun to do.

I specialize in disasters, and when you’re working with disasters in real life, it can often be incredibly grim work. You are either responding on the worst day of somebody’s life, or you are trying to convince people that terrible things are going to happen. To be able to work on disasters in a fictional setting means that you get to [engage with] all the exciting parts of the work—the ways disasters can be dramatic and visceral—without anyone getting hurt. If you do a really good job at it, you can sneak in some subversive education along the way. You wouldn’t think it in a movie like MOONFALL where the Moon is crashing into Earth, but there is some good science snuck in along the edges. 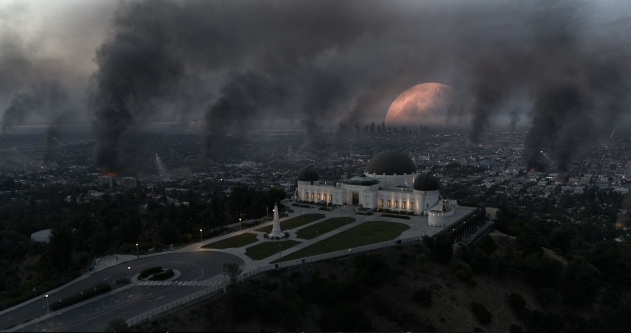 Destruction across the LA skyline in MOONFALL. Photo credit: Courtesy of Lionsgate

S&F: What stage was MOONFALL in when you came onboard?

MM: Being a science consultant, I’ve done everything from pre-pilot idea generation and worldbuilding all the way through writing for actors on set. For MOONFALL, I was involved in the writing process—in the one-on-one science tutoring for the people writing the script. There was a large team of science consultants on this film; everything from an astronaut to a medical consultant to an on-set science consultant whose handwriting we see in a couple scenes. The Moon is falling into the Earth was the stage of the story when I showed up.

My job was to talk about the planetary science and disaster side of things. Everything from: how was the moon formed? How did we learn about the Moon and what do we definitely know from Moon missions? All the way through to, now the Moon is coming to the Earth, what does that change on the Earth to have our gravitational best buddy getting closer? What does that do to earthquake frequency, to tides, and what are the things we’d notice first? How do people respond during disasters? What are the characteristics of the people who survive versus the people who don’t?

S&F: What are some of the facts you were able to sneak into the film that you’re happy about?

MM: One of my favorite [facts] about disaster preparedness is that we will either survive together or die alone. That is a core, essential truth of disasters. It makes for a good story, because it means that the people who work together are the ones who make it through until the end. Not only that, but it’s the ones who have pre-existing trust, pre-existing relationships [who survive]. In real life, that happens because of things like throwing parties and inviting neighbors, which builds up your community resilience. The number one disaster tip is: throw parties! Have a kit, sure; have a plan, awesome; learn CPR, it’s a good time; but really, throw parties so that if your house catches on fire your next-door neighbor calls you because they have your phone number. Or the floods happen and they’re there to pull you out or carpool to evacuation. In MOONFALL, we get to see that in terms of who people turn to when things are high stakes. [They turn to the] people they have those pre-existing relationships with, the people they have history with–makes for a better story and it’s real life. 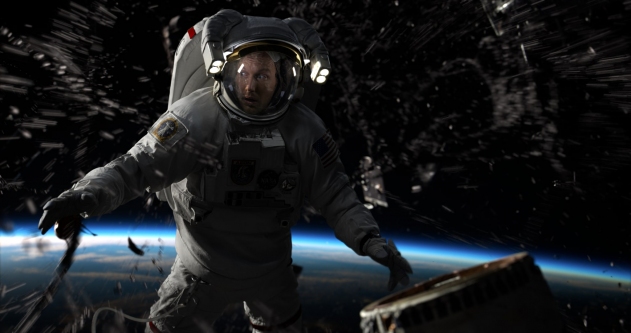 S&F: That seems like an achievable goal so far as preparedness is concerned. Climate change is the looming disaster that is the driving force behind a lot of the more immediate disasters taking place. Are there any similarities between what happens in MOONFALL and what we can think about in terms of climate change action?

MM: Both DON’T LOOK UP and MOONFALL are about big, looming events faced with inaction. Just like we’re seeing now with climate change or what’s been happening with the pandemic. There is a lack of coordination and communication. One of the drivers of the plot of MOONFALL is that people are giving up; they’re surrendering and retreating to their rich enclaves in a ski resort in Colorado. These are things we see [in real life]. It’s fiction and amped up, but those are real-life problems we have to deal with, because you can’t buy your way out of a global catastrophe. There is no amount of money that can save you when your planet is no longer habitable. One of the current tropes of private space flight is, let’s go to Mars. Mars is not a backup planet. There is no place on Earth that is less habitable than the most habitable place on Mars; you can go outside and live and breath here. You are not going to freeze or overheat for the most part, especially not both simultaneously, which can happen on Mars. If you cannot make things work on Earth, you will not make them work anywhere else. This is easy mode, this is the base standard, you have to be able to sustain a habitable planet before you can go and do things elsewhere. You lose your planet that’s it, game over, you don’t have a second chance.

S&F: Both DON’T LOOK UP and MOONFALL focus on that need for collective action.

MM: We need to be coordinated. In MOONFALL, different groups have entirely different objectives so will directly cancel each other out, and they’re arguing about which will work best and not supporting each other to have the greatest chance of success. Those are real problems that we’re struggling with, and I appreciate that this movie allows us to explore those ideas without just grinding it down. You come away having had fun and not feeling even more depressed that we’re not getting anywhere; it’s important to feel some hope and optimism.

S&F: Why have you chosen to work so frequently as a science advisor?

MM: I love it partly because I love movies and TV. I have the opportunity to make the shows and the movies that I watch better and more interesting. I have a chance to make them more fun. There is also an element of, writers write what they know. Well, if I’m a scientist they know, then suddenly there are fictionalized versions of me joining the other architypes of scientists in the world. That’s useful.

There is also so much about the world that is just weird. Most people learn science in school and then don’t touch science again if they can help it, but they’ll watch movies and TV shows. That turns into a pathway for subversive education—you can slip in bits and pieces. Even if you have an alternate world in which the “moon is not the moon,” you’re still following the scientific process, still doing the observation, tests, analyzing the results, iterating.