Iuli Gerbase's debut feature THE PINK CLOUD is set in an eerily familiar Brazil in which a toxic pink cloud forces the world to isolate indoors. The film follows two people who end up trapped together following a one-night stand. We spoke with writer/director Iuli Gerbase almost a year into the COVID pandemic, in January 2021 when the film premiered at Sundance. THE PINK CLOUD is now being released into select theaters on January 14, 2022, and will be available on VOD starting on March 1. Our interview is republished below.

Science & Film: The comparison between what is happening now [with the COVID pandemic] and what your film depicts is very obvious. One thing that stuck out to me is the difference between the two main characters and their outlook given the circumstances—one feels constrained and the other is thriving. How did you arrive at those different outlooks?

Iuli Gerbase: I wrote this film in 2017 so I couldn’t have imagined we would be living in a similar situation to the characters. My idea was for this forced marriage that the cloud brings about. They react in very different ways to this quarantine. The idea was that the life he imagines is not the same as what she’d imagined, but the cloud forces them into the life that he prefers. The idea was to have this woman following steps she wouldn’t normally follow, [like] she says that she doesn’t want children. He wouldn’t be the person she would choose to be with. After so many years, they have a kid almost out of boredom.

The cloud is this soft pink because it’s supposed to be ironic; it looks harmless, even cute, and then the years go by and Giovana gets sadder about her lack of freedom. For me, the cloud is like society putting her in a place she doesn’t want to be but has to be. 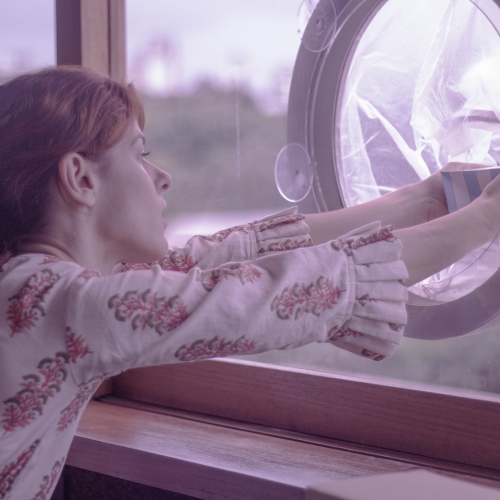 S&F: Why didn’t you want to have more of an explanation for the cloud’s existence in the film?

IG: The only thing I wanted to explain was how to solve the problem of food. I put the tube on the window for drones, which is also a joke about how we use delivery services more and more here in Brazil—I’m sure in the U.S. as well. I didn’t want to say what the cloud was because I didn’t want to go into science fiction. I wanted people to look for their own meanings in the cloud. One of the references I had was Bunuel’s THE EXTERMINATING ANGEL where people are stuck, and you don’t know why. In the film, they don’t even try to open the door, so it’s a crazy situation and you focus on the characters. For me, it doesn’t matter what the cloud is or how it appeared. Of course, now with coronavirus, viewers will relate to it that way and I can’t escape that—in the beginning that made me so anxious, but what can you do. In a way that is also interesting because people will relate so much to the characters.

The most obvious [meaning for the cloud] one is this repression of the woman character. Also, I was researching what takes away our freedom. Yado’s father in the film has Alzheimer’s; he’s trapped in his body so is even less free. The sister is locked up with girls so she will be a teenager without going to parties and exploring with boys.

S&F: The ending of the film throws some ambiguity into the reality of the cloud. The film stops before you know what happens.

IG: We were very specific about cutting the film so that it would be open-ended. For me, any interpretation is okay.

IG: We shot in a real apartment and the actors really felt they were stuck. We shot over four weeks and by the last week, the actress couldn’t stand it anymore—her energy was low, she was suffering a little bit. We discussed [when COVID began] whether maybe we were more prepared for the pandemic because we had like a rehearsal. The actress is very energetic and likes to go out and do things. In the beginning we were joking about it, then afterwards she was like, I can’t stand it anymore. For me as well, I thought I was going to be better in the pandemic but during the first months I was so anxious. I think I’m calmer now. The pandemic is surreal for everyone I think but for us it had this extra layer of bizarreness because, We shot this! How has this become a reality?! The actress she had a dance marathon in June called the Pink Cloud Party.

IG: My next project that I’m writing also has a sci-fi element but is also a very intimate character study. The sci-fi aspect is the premise but not the focus. I like to get away a bit from reality because sometimes I get bored with reality, so I like to bring in elements that are not real but then focus on how normal humans would react to it. But I can’t shoot everything in an apartment again.

THE PINK CLOUD is written and directed by Iuli Gerbase. It stars Renata de Lélis and Eduardo Mendonça. The film will open in theaters on January 14, and be available for streaming starting on March 1.