A Race to the Bottom: Shannon Walsh on The Gig is Up By Sonia Shechet Epstein | November 12, 2021

Canadian filmmaker Shannon Walsh’s THE GIG IS UP: A VERY HUMAN TECH DOC, which made its world premiere at CPH: DOX and is making its New York premiere at DOC NYC on November 13, investigates the daily lives making possible the $5 trillion global gig economy. It focuses not only on drivers and delivery people working for apps like Uber and Deliveroo, but on those “ghost workers” doing the less visible work we attribute to AI algorithms for monopolies like Amazon. THE GIG IS UP portrays the unacceptable working conditions of people around the world, and calls for attention and change. We spoke with filmmaker Shannon Walsh about the critical labor issues of the gig economy.

Science & Film: What was your entry point into this whole world of gig work and the platform economy?

Shannon Walsh: I’ve been fascinated for the last couple of years with our techno-utopianism; this idea that, whatever the problem, technology will save us. We lean on technology in these days of the climate crisis thinking that technology is the way. While that’s not wrong, there often is a kind of delusional quality—it’s literal wishful thinking. In the realm of labor, we’ve fallen into the myth of the algorithm and that technology is further along than it is. We want to believe that AI is the future.

My last film, ILLUSIONS OF CONTROL, was looking at people living in the wake of disasters that had been created by that same kind of techno-utopianism. So, I’ve been interested in thinking about technology through the lens of the human experience and what it actually looks like to the people who are living within the tech of the day. A Mary Gray book Ghost Work was a part of the research journey for making this film and totally felt like, here we are again. The subtitle to THE GIG IS UP is A VERY HUMAN TECH DOC because from the beginning, I thought the things that tech docs aren’t doing is showing the human element. Even talking to tech experts in researching the film, I’d ask, so what about the labor question? And honestly, it was like if I asked them, what do you think of life on Saturn? [laughs] It was like, what? In the film, Mary talks a bit about that. When she asks people what they think of labor conditions it was either that they said that they didn’t know or they didn’t want to know what was happening behind the technology.

This kind of intellectual labor happening behind the AI is 80% of what this type of work looks like—much more so than Uber or your food delivery driver. This type of gig work labor on platforms is supporting technology. We don’t even know what the conditions are. We think we know the condition of our Uber driver because we think we can ask our Uber driver, how is it? Little do we know that we’re sitting there with a phone in our hands that can determine their livelihood with the tap of a one star. The tech filmmaker that I am, I’m really interested in human stories and peeling back a little of the magic to see what’s really going on, and what we find looks a lot like what’s been there before, which is people doing the work, just for very low pay and conditions which we as society for 100 years have said is unacceptable. That transformation is happening right under our feet and half of us are unaware that it’s even happening: the erosion of labor protections that have been fought for the last 100 years. We haven’t even begun to grapple with it. 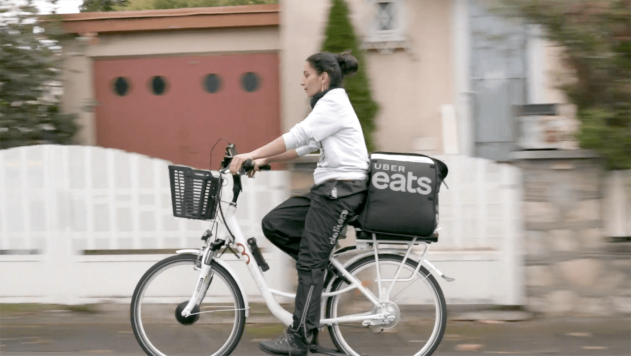 Still from THE GIG IS UP

S&F: How did you decide on the scope of this story in terms of location?

SW: The film is set in China, the U.S., Nigeria, and France. China is leading the world in life through your smartphone. One of their major apps is called the Amazon of Services and you can tap anything on your phone and have it brought to you—a massage or a haircut, you name it. It’s the service industry at the touch of a screen, and a built-in online economy with its own currency. I knew there was no way to leave out China, but I also felt like compared to early 2000s where we had this sense of globalization creating a world of haves and have not, now we have this flattening of the world where people are working the same job in Florida, Lagos, Beijing, and for similar pay. Multinational corporations but also the platforms themselves have taken over network effects globally and can have an impact on the economy, really creating a new kind of stratification. Someone in Michigan is competing with someone in Lagos for the same job. That’s an interesting element of the platform economy and the way in which it is completely borderless and out of the purview of any national structure, at least in the realm of mechanical turks and apps that work in that fashion, which are many.

S&F: The film starts with some hopefulness about the kind of flexible work platforms provide but very soon you see how that hope doesn’t pan out. As the film goes on it builds and has a call to action. Who would you like to reach with this film?

SW: Layla from France in the film says, we want this work to be seen. To me, there was such a sense from many of the workers that I talked to that what they’re doing is invisible, so it’s for them to be like, we see you. I want the people doing this work to feel seen and have their stories represented. We also want to make an impact with the film. It’s very early days. Because the companies have been so effective at selling us this idea that it’s flexible, part-time, easy-going type of work, a lot of the public have been sort of duped to not noticing the conditions that people are working in. For that reason, I feel like everyone from the policymakers to people working in labor law [are the audience I want to reach]. There is so much we need to re-consider. Even the union-type organizing that’s happened in the past needs to shift into a new paradigm.

I’m not anti-platform myself; the idea that you can harness creative and intellectual ability from around the world is incredibly exciting. People who never could enter their intelligence and creative input into our world could do that in this context, but not under the conditions that are the race to the bottom that is happening right now. We want to get people up to speed because to make a change and create a different system we need to understand what we’re starting with, and right now people are not even realizing what the conditions are and that we as consumers are bosses. I didn’t know that! It’s totally inappropriate that we’ve become a society that rates human beings’ labor like a commodity, and we don’t even know it. It’s not okay to treat people that way and I don’t think people would want to do that if they knew. 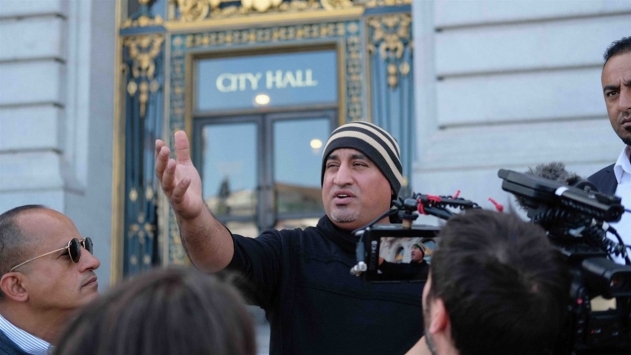 Still from THE GIG IS UP

I don’t think going back to a 9-5 is something everyone is like, oh please! I think solid, well-paid work is what people need and there is an incredible lack of formal employment in the U.S. right now. What Mary [Gray] also points out is that these are information technology workers—the people helping the algorithms decide what’s fake news. At the very heart of democracy, we have people working inside this technology and for one, we don’t know who they are because they’re in the shadows, nor the conditions in which they’re working. Given the major pressure on this information age, it is crucially important to take these things into account right now.

S&F: Do you think you’ll continue on this topic?

SW: Possibly. I’m interested in technology in general, so I hope to continue asking these questions in different ways for sure. This is my fifth feature and I’m working on my next right now. There are lots of stories to tell, but I hope THE GIG IS UP will start an urgent conversation. We have a big tour and want to plan getting people out. [This issue is] a social contract we need revise right now.

THE GIG IS UP is directed by Shannon Walsh and written by Walsh, Harold Crooks, and Julien Goetz. It is produced by Ina Fichman and Luc Martin-Gousset, edited by Sophie Farkas-Bolla, filmed by Étienne Roussy, with music composed by David Chalmin. Walsh will be in person at the DOC NYC screenings on November 13 and 14.