Advance Screening of Son of Monarchs at MoMI September 14, 2021

On October 7, our Science on Screen series at Museum of the Moving Image will be presenting an advance screening of Alexis Gambis's new film SON OF MONARCHS before it premiers on HBO. The filmmaker will be in attendance. Winner of the Alfred P. Sloan Feature Film Prize at the 2021 Sundance Film Festival, the film stars Tenoch Huerta Mejia (NARCOS) as a butterfly biologist who returns from New York to his hometown in the monarch butterfly forests of Michoacán, Mexican. Issues surrounding identity, migration, transfiguration, and science punctuate this poetic film.

In Februrary, following the film's Sundance premiere, we interviewed Gambis about the film and its themes. That interview is re-published in full below.

Science & Film: How did you balance how much technical science you wanted in the film with the ways you wanted it to be evident as metaphor?

Alexis Gambis: I try to weave in scientific ideas almost like music. Ultimately the film is about identity, so in multiple ways I tackle that: on a genetic, scientific level because he studies how butterflies generate colors and patterns, so there is also a resonance with racial politics. The idea of migrating and having multiple identities [resonates with Mendel, the main character] trying to figure out who he is and where he belongs. I wanted there to be punctuations of science and these moments where he pauses and thinks about himself and talks about science. I thought it was an interesting idea to use it as voiceover, because it was so internal for him. I also felt that it was important for it be in Spanish. And as you said, the science brings us into other chapters—the childhood, the spiritual parts, his relationship. 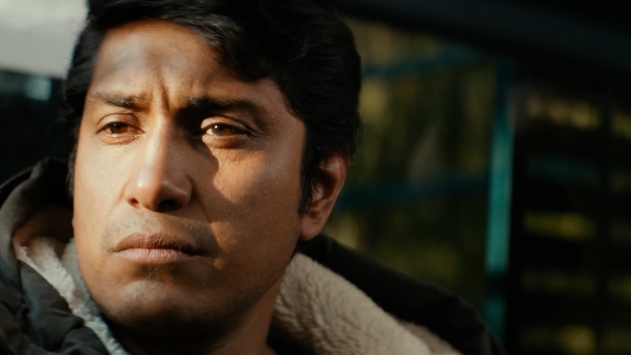 S&F: The butterfly is so visual; how did you land upon it as the central subject?

AG: A lot of my films are focused on animals. Right now, I’m working on a film about my childhood and it’s all about rats, actually; I’m really inspired by Alain Resnais who did this film called MY AMERICAN UNCLE which has rats fighting each other. The butterfly came about in several ways: there was a lot of political activism where I saw the butterfly appear as a symbol for migrant rights. I spent some time with an Argentinian activist in Washington who would make these beautiful illustrations, kind of like an optical illusion of a butterfly and then you see all these fists and people’s steps and all of these migrant references when you look up close. Thinking about borders, butterflies don’t have any borders. Undocumented immigrants would say, we should have the same rights as monarchs.

On the science side, there were all of these articles covering research about how scientists can now color the butterflies the way they want to, so thinking about boutique… it’s so bizarre. The idea is that now with CRISPR, we can really understand colors and patterns and modify them, so that was interesting to me. Then, there was also the butterflies that represented the souls of the dead in Mexico. All of these things came together, and I was like, what if it’s a story of a Mexican scientist who works on butterflies and identifies with butterflies.

LEARN MORE: Tickets for SON OF MONARCHS at Museum of the Moving Image

There is also a paradox: the monarch is on the endangered species list because there’s been an 80% decrease in migration—part of it has to do with deforestation and pesticides. Everybody loves butterflies, but the world is not really trying to take care of them.

S&F: Covering a lot of science films I always read the credits for science advisors, and I think your film has the most I’ve ever seen! You had nine science consultants. How were they involved in the film?

AG: Partly because I’m a biologist as well, I love having scientists involved in multiple ways, not only advising but also acting. The opening scene of the film which is a dissection is done by a butterfly scientist. His name is Bob Reed, he’s an evolutionary biologist who has a music band. He was the one who gave me the idea of the tattoo because I asked him, what’s one of the craziest things you’ve thought about? He said, I’d love to tattoo myself with butterfly ink. And I thought, I have to put that into the film! Some advisors were involved in the actual research mentioned in the film about the optics gene; others helped me with props—they came on set with boxes of butterflies; there were people at NYU who gave us access to labs; and there were also people who acted in the film. One guy who was just finishing his PhD was involved with production design. He created the lab bench for the actor to make it realistic.

Some of the imagery, the microscope shots, those were shot in Washington with the help of a French scientist named Arnaud Martin who is an amazing butterfly scientist, and I shot those myself. Those had to be done after principal photography because it’s tabletop filmmaking that takes a lot of time. I spent four days in his lab at George Washington University, and he was the one dissecting and I was filming him.

There are also scientists in Mexico who helped us access the butterfly parks. It’s basically forbidden to go so close to the butterflies. That opening shot in the film where you see the clusters, those are highly protected areas because the butterflies are sleeping so you can’t bring light reflectors. You want to cry because it’s so surreal. We were able to get access because I told them I was a scientist and we had a limited crew, so they advised us on how to pick them up. If you go as a tourist, you can’t get that close. 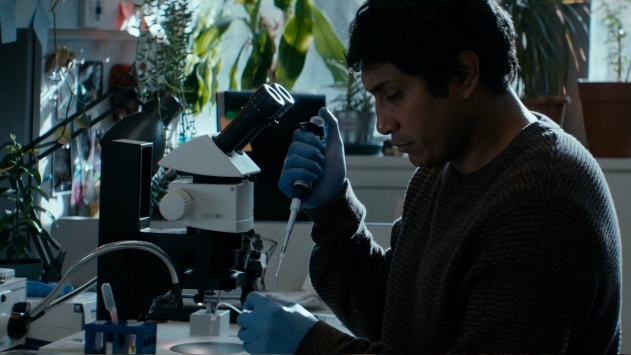 S&F: Did anything go wrong as you were shooting?

AG: Nothing went really wrong. We spent a day shooting there and I was like, I could spend a week. It was the first time a fiction movie was shot there, I think. We had to be careful. There were other animals there also—this little salamander, they were like, everybody’s always here to see the butterflies, you need to see the local ajolote. It’s like a prehistoric creature. They scooped it out of the river and it was this alien-looking creature. We shot it.

AG: This film was definitely my most organic project in terms of working with the actors, the crew, everybody had multiple identities, it was a beautiful experience. One of the things I’m really interested in is animal perspectives. This next project I’m working on is based on my own childhood—I’m going to be acting in it actually—it’s the story of a scientist who seduces a girl who is housesitting to access the house he grew up in. I’m shooting in the house I actually grew up in. I’m really interested in moving away from insects and going into rodents. It’s called MOUSETRAP and I’m going to shoot it between France and the U.S.

In general, I feel like films should be in multiple language and co-productions. With science it’s amazing because science is somewhat universal, so you can talk about CRISPR and it can be in Mexico or the U.S. I’m excited that this film, SON OF MONARCHS, hopefully touches people who are immigrants by showing the diversity in the scientific community.