Filmmaker Noah Hutton has two films set to open this year: his documentary IN SILICO—ten years in the making—which premiered at DOC NYC, and his sci-fi feature LAPSIS, which made its world premiere at SXSW. Both films uncompromisingly explore the promises of large-scale science and technology projects and follow-up on the sometimes unforeseen outcomes.

In the case of IN SILICO, Hutton tracks the work of Switzerland-based neuroscientist Henry Markram as he establishes the Blue Brain Project. The project aims to construct a computer simulation of the entire human brain, promising at the outset to do so in ten years. In the case of LAPSIS, Hutton imagines a world in which quantum computing is being implemented on a large scale. We follow Ray (Dean Imperial) as he gets a gig as an independent contractor laying cables for quantum networks to replace existing internet connections.

LAPSIS will be released on February 12 by Film Movement and IN SILICO, which received development support from the Alfred P. Sloan Foundation, is expected to come to virtual cinemas this spring. We spoke with Hutton about both films.

Science & Film: Over the course of the ten years during which you made IN SILICO, how did your intentions for the film change?

Noah Hutton: The fact that I came into [the project] through a TED talk [by Henry Markram] led me to grapple with the way in which I got wrapped up with the hype; I realized at a certain point that I might be the only person in the world who actually cares about a ten-year timeline. Everyone else had moved on and allowed the project to morph into the Human Brain Project and start a new ten-year timeline, and all of a sudden it was 2023, and I found myself going on MSNBC saying: I’m making a 15-year film. At a certain point I had to look at myself and try to understand what had happened to me to get wrapped up in all this. The film became more personal nearer to the end of the decade when I realized that I needed to not just make this film about the people making promises around me but to make it about the promise I made to myself and what that promise was based on and how that’s now changed. 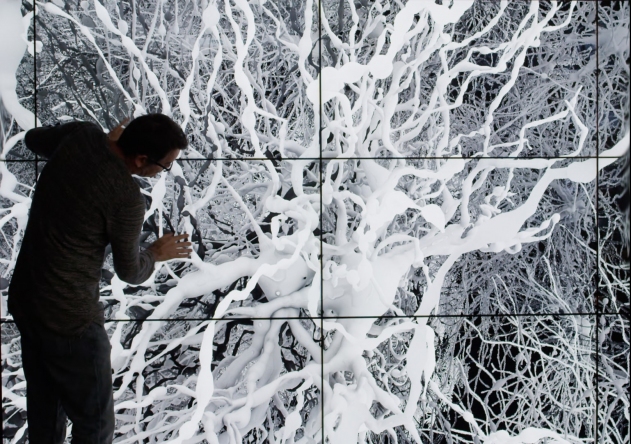 S&F: Part of what the film shows is Henry’s shifting attitude towards you and the film. How did you deal with that at the time, and now that the film is finished, how has that relationship continued?

NH: The relationship started off very well because I was only focusing on the Blue Brain Project and Henry’s work. To their credit, as soon as I started talking to outside critics like Sebastian Seung, the Blue Brain Project knew about it and they even encouraged me to seek out their critics because they knew them just as well as I did, they told me at the time. It was around the time of the open letter [criticizing the project], when the project ballooned into the Human Brain Project, that things took a turn. I realized if I went to talk to people like Zach Mainen it was like a next level of criticism, because he had come out very sharply and publicly against Henry. Once I did that, I felt like I had broken off as a truly independent filmmaker. I was starting to talk to people without seeking their permission as I went along.

In the final years, Henry didn’t show up for an interview and I felt like they were trying to manage the film. They started to realize it was ending and they encouraged me to continue making the film because the story was not over. But I was very clear that I was going to end my timeline. When they saw a cut of the film—which I showed them before it came out as part of our good faith agreement—they were not very happy with it. Partly it was a realization of all the criticism I had gathered that they didn’t know about, and part of it was a realization that I was bringing some critiques of my own.

We showed the film to a lot of other people to make sure it was fair to Henry and the Blue Brain Project. We had a scientific advisory board, which Sloan asked us to form as part of their support, and two out of the three members even said the film wasn’t critical enough of Henry and the Blue Brain Project at certain stages of the editing process. I had a realization that people on both sides will feel that it’s too critical and not critical enough; that’s some indication that the film has gathered a range of positions. In the end, I can only be true to myself and no one is a perfectly objective observer, so this is really, truly made up of my experiences as a filmmaker.

The purpose of a film like this is to show people who had at one point been presented with hyped up promises about what a certain line of research will bring to the world, ostensibly in their lifetime. The purpose of the film is to report down the road on the hype.

S&F: What are you excited about now in neuroscience?

NH: I would love to make a film about someone like Eve Marder who is at Brandeis and has been researching just a few circuits in crustaceans her entire career. She is now considered one of the most prolific neuroscientists in the community for her insights on that one circuit.

Industrial-scale projects like the Allen Institute, the Human Brian Project, and the Blue Brain Project, it’s just unclear what the payoff is yet for humanity. I hate closing a door on anything, and I purposefully don’t close the door in the film because I just don’t think that’s very scientific; at the end of the day, until you’ve proven an idea wrong, I think you have to continue. But it’s tough also when there’s so much money at stake, especially when it’s public money. Something like the Allen Institute, which is private, the conversation is a little different. Public money, the public should have a real say in or at least a knowledge of the outcomes.

S&F: To switch gears to LAPSIS, can you tell me a bit about how you came up with the premise of the film?

NH: I imagined this world of a quantum tech boom because I think we’ve all heard rumblings that quantum computing is around the corner. Quantum computing will actually require different kinds of cables, so our existing systems of connections will be rendered obsolete if we need to establish a quantum internet on a large scale. There are already projects by Fermilab that are building quantum internet networks around Chicago. It was interesting to me that this would require some blue-collar infrastructure work.

I’ve seen other films deal with quantum science and I did my homework—I read about it—and I was trying to think, how much of this do I need to explain in the film? But if I was really interested in telling this blue-collar, sci-fi story about infrastructure work, I was not going to assume that the main character knew much about quantum science, nor would they necessarily need to in order to do that work. I wanted the audience to be with that character and that is the character of Ray in LAPSIS. The film is interested in the quantum science of it all only as it relates to the way in which that technological boom has trickled down to the working class, and ultimately is interested more in the economic forces and conditions of labor.

S&F: IN SILICO and LAPSIS are looking at two grand promises of science, one is the documentary and that’s following one promise to its inconclusive end, and one is quantum computing in LAPSIS which is following it through to its end but looking at the potential consequences. This is just a comment, but I appreciate your skepticism.

NH: I just saw this wonderful meme showing dominoes in the form of a website to rate girls at Harvard ending with taking over the capital and it’s like, we’ve got Facebook and you can fast forward to the trickledown effects of what Facebook may have done writ large to the world. I very much think it’s important to have that kind of perspective with science, not to take everything at face value and be a pure positivist. The skepticism is like an audit of where the benefits have been, but we have to remember that these grand promises of science and technology sometimes do unexpected things to our world. When we take account of that, the next time someone comes around trumpeting something, we might not accept it wholesale.