Winner of Sundance’s World Cinema Audience Award, Jerry Rothwell’s acclaimed new documentary THE REASON I JUMP attempts to evoke the experience of people with nonverbal autism. The film is inspired by a book of the same name written by 13-year-old Naoki Higashida, who has severe autism. Higashida’s book was translated from Japanese to English by David Mitchell (Cloud Atalas) in 2013. THE REASON I JUMP is making its New York Premiere as part of DOC NYC, accessible online from November 11-19, and will be released by Kino Lorber in January 2021. We spoke with director Jerry Rothwell from his home in the U.K.

Science & Film: How did you navigate including the book The Reason I Jump, the voice of the book’s narrator, and also broadening the story?

Jerry Rothwell: The book was a springboard for thinking about nonspeaking autism. What the film tries to do is mimic the role of the book, rather than adapt it. It’s a really tricky book to adapt because it’s 58 questions about autism, no characters, no story, although I think it does have a shape—you get a strong sense Naoki as someone who’s questioning why he’s been born to someone who is almost celebrating who he is.

When I first encountered the book, I thought about the obvious film, which is that it’s about a young, autistic writer who doesn’t speak but who finds language, finds a means of communication, and finds himself. Fairly early on I went to meet with Naoki, and he was up for the project but not up for appearing in it, or it being biographical. I think there are a few reasons for that: he’d just been part of a documentary he was unhappy with, and I think he’d had enough of media, and also because of the controversy that his work contracts—did he write it? I think for him, the words need to stand on their own. Like a lot of writers, he’d rather portray himself in his writing than be filmed and followed around by me [laughs]. I think that was a real blessing for the film because it made it much wider.

The other thing about meeting Naoki was that any doubt that I’d ever had about whether he’d written the book was laid to rest. He is quite dysregulated—he’ll point to a few words, get up, then do a few more, and gradually build up a sentence. David Mitchell, who wrote the book’s intro, said it was like watching someone try to carry water in his hands across a crowded Times Square. It is extraordinary and the poetry of that writing was mind-blowing to me.

S&F: How did you find the film’s subjects?

JR: I wanted to get across the idea of autism as a sensory experience. Therefore, Amrit’s work, an artist in India who communicates through her painting and drawing, felt like a good way to get into the idea of seeing detail before you see the big picture—which Naoki describes in his book. Then with Joss—the son of two of the producers who’d optioned the book because it had such an impact on them and the way they understood Joss—I knew that with him I could film over a longer period of time because he’s in the U.K. [where I’m based.] I could go a bit deeper into the difficulties and challenges of that sensory intensity. Then, I really wanted to find people who communicated in the same way that Naoki communicated and were political advocates. That’s where I found Ben and Emma, looking at advocacy in the U.S. around nonspeaking autism.

I’d been shooting in Sierra Leone on another project and I also wanted to have an African dimension because I felt that so often media representations of autism tend to be through the Western experience of it. I found Mary had contributed her experience to a conference, so I filmed with she and Jestina.

S&F: How long did it take you to make the film?

JR: About three years or so. The joy of making feature docs is you are able to immerse yourself in something.

S&F: How did you decide how much clinical information about diagnosis to include?

JR: The book is about trying to explain experiences—sensory and social. That’s what I felt the film should be. The danger is, you don’t want to use the people in the film as examples of the book, so I tried to give the subjects enough autonomy. One of the big structural decisions of the film was, do we intercut these characters throughout the film or give them sections of their own? In the end we gave them sections of their own, so you get to know the characters.

The other thing to balance was, because the characters are nonspeaking, how much of their parents’ experience and words do you use? Quite often in films about autistic people, what the filmmaker ends up doing is telling the parents’ story and not the autistic person’s story. That parent’s story is really dramatic and important, but it has a narrative.

READ MORE: Interview with Psychologist Daniel Goleman on INSIDE OUT

In the early stages of making the film I wondered whether it should includeneuroscience.For research I interviewed Henry Markram who models the brain and has a theory of autism. But in the end, I felt it wasn’t a film about that, though hopefully what’s in it is backed up by science. I think it’s an expression of a lot of what researchers are coming to understand about the nonspeaking autistic experience.

S&F: Film is perhaps particularly well-suited for trying to represent an experience that involves all of the senses.

JR: Definitely. In fact, one of the things I learned is that cinema has a lot in common with the autistic experience—I mean that’s a huge generalization, but what cinema does is fragment things and create focus in different places, structuring them in a way that’s different than the way we experience everyday reality. My past films have been quite verbal, they often involve interviews, I did a literature degree and I like words. But what this film taught me is that probably isn’t the primary way people experience film. You can get away with very little dialogue. For me there are still too many words in THE REASON I JUMP, actually. 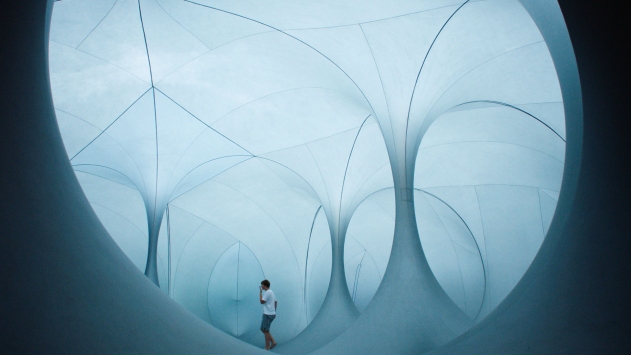 S&F: It’s making me think of Godfrey Reggio’s KOYAANISQATSI which we’re showing at the Queens Drive-in this Saturday.

JR: I watched KOYAANISQATSI in the lead up [to making this film]. I tried to watch a lot of non-verbal films. It’s all very well to do that for ten minutes of a film, but how do you sustain that shape over such a long period of time? KOYAANISQATSI’s great because it’s got movements in it.

THE REASON I JUMP is available to watch as part of DOC NYC from November 11 through 19. The film is directed by Jerry Rothwell, produced by Jeremy Dear, Stevie Lee, and Al Morrow, and edited by David Charap.