Netflix’s new documentary MY OCTOPUS TEACHER follows South African cinematographer and freediving enthusiast Craig Foster as he bonds with a small octopus residing in his local kelp forest. Visiting her every day over the course of a year, Foster films more and more of the octopus’s unique behavior as she becomes habituated to his presence—she grows horns, changes colors, camouflages herself with shells, rides on the back of a shark, and even seems to hug him on camera.

MY OCTOPUS TEACHER is written and directed by Pippa Ehrlich and James Reed, who we spoke to from their respective homes in South Africa and the UK, about making the film and what they learned about octopuses, including from an octopus psychologist.

Science & Film: Was it the octopus or the man who made you want to make this film?

Pippa Ehrlich: I was working as a marine conservation science journalist for an organization in Cape Town, and at the same time had become very interested in diving in cold water and understanding the kelp forest ecosystem. I spent some time diving with Craig [Foster] and about six months later he told me, I want to make this film. He told me snippets about his experience with the octopus and asked if I would help him, and that started the most unexpected adventure of my life so far.

S&F: James and Pippa, how did you two work together on the film?

James Reed: I came on at a much later stage. Pippa had been involved with Craig in the first stages of making MY OCTOPUS TEACHER and they’d gotten a rough cut, but neither felt that it was doing what it could potentially do. Based on a couple of my previous films, they thought it might be quite an interesting collaboration between our different styles and experiences.

I was very moved by the cut but there were also ways in which I thought I could help with a new, slightly more objective perspective. I was drawn to the octopus’s story, which was there to see on the screen, but at the time there had been no interviews done with Craig, so that was my suggestion. Craig as the subject really fascinated me.

S&F: In the film, Craig looks so different in the water versus sitting at the kitchen table during the interviews. Why did you want to film him in that domestic setting?

JR: Pippa and I talked about that quite a bit. We thought about very atmospheric places on the coast that connected geographically to where he was in the water, and in the end decided that the most important thing was to have him be comfortable.

PE: What James very rightly pointed out quite early on is, you’re showing this guy in this completely exotic place with light rays coming down, science fiction-like creatures everywhere, and he’s holding his breath and filming with one hand, and we need to make him relatable. We needed to make him feel like a guy whose story you want to listen to. That was the genius of putting a man at his kitchen table.

JR: There’s also a practical thing: if you sit somebody behind a barrier, they feel a bit safer.

PE: We filmed 14 hours of interviews over three days, so we all had to be comfortable.

JR: On a purely technical, visual level [with Craig at the table] you can control where the hands are, where he is gesturing, so you know you always have the bottom of your frame set.

S&F: In terms of filming underwater, can you talk a little about that cinematography and how it was done on a technical level?

PE: Most of the cinematography, and most of the shots of the octopus herself, were filmed by Craig on a small camera. You can feel it in the shots—sometimes a little shaky, very dynamic, and you can feel him moving through the water. Later on, Craig invited his friend Roger Horrocks to come film with him; Roger’s one of the top wildlife cinematographers in the world, and what was amazing about that from an editing point of view was that they both had cameras, so I had the most incredible cutting points to work with between a big camera and Craig’s handheld shots. After the octopus died that we went back and started getting the shots from the octopus’s point of view, because Craig always had his point of view with his camera, but then we needed to film him. 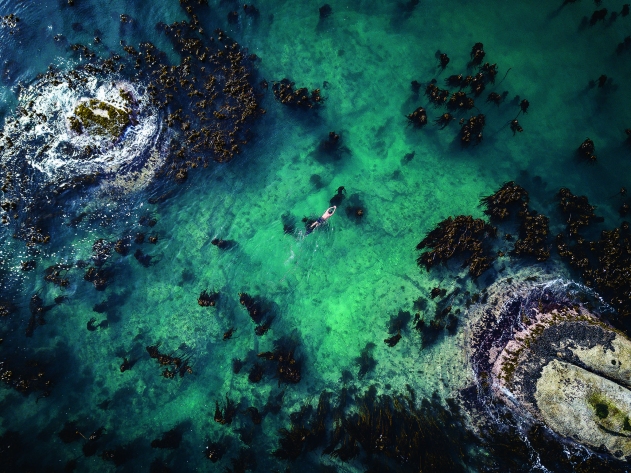 S&F: Was it always the same octopus?

JR: I’ve been asked that before. If you know how special and unique that level of access to that sort of creature is, the answer is quite clear because he had habituated that octopus to such a degree that she was exposing her daily life in ways that you couldn’t get a wild octopus to. In some forms of filming [shooting other octopuses] would have been a legitimate thing to do—if you’re talking about something generic, there could have been an ethical reason for getting other shots to show bits of behavior that helped the story. But in this case, it would have been absolutely impossible. Once she was totally habituated there were 100-times more things you could film with that octopus than with any other.

S&F: The few shots where you see her on Craig’s body you remember how small she is, which reminded me of being with kids when you step outside of their world and see them next to something else and remember that they’re so tiny.

PE: They’re tiny and they’re vulnerable. Even a big octopus is a lot smaller than you think.

JR: That’s such a good example, I get that with my daughter a lot—she’s three-years-old and you’re used to just being on the floor with her but then stand next to her and she’s tiny.

READ MORE: How To Film Underwater

S&F: How did the process of spending all this time making a film about an octopus change the way you see the species?

PE: The first thing I noticed, about three months into the film, was that I couldn’t eat calamari anymore. It was like this piece of rubber in my mouth. But definitely when you spend sometimes fourteen hours a day staring into the eyes of octopuses, it does change the way you think of them. At one point, I was having strange dreams about octopuses…

At one point, we flew out professor Jennifer Mather who is one of the world’s top octopus scientists who is based in Canada, and she’s actually an octopus psychologist. She works with octopuses and she’s a human psychologist, and she puts the two together. She gave us really incredible insights into how this animal’s intelligence works and what they’re motivated by. The first thing she said was, an octopus’s life is all about the contradiction between curiosity and fear. That comes across quite strongly in the film: it takes a long time for Craig to earn her trust. That was the first breakthrough in terms of how we told our story. Then you start to understand the way their brain is structured. What’s really cool about octopuses is that four or five hundred million years ago, people and octopuses were both little worm-like creatures and then we split. Two hundred million years ago you get the first early form of octopus, one of the most complex, invertebrate animals in terms of neurological structure. Then on the other end of the evolutionary tree you get human beings, which are one of the most complex neurologically structured vertebrates. And the fact that you can tell a story about those two creatures engaging with one another is pretty phenomenal.

JR: I hardly knew anything about octopuses [before filming] so it was a very steep learning curve for me. It was so surprising because the level of intimacy of the relationship was nothing like I thought an octopus would be capable of; I kind of forgot she was not a human. There’s a danger with sounding anthropomorphic that was always a fine line we needed to be aware of, but the sophistication of the behavior and the learning and the reactions to different things that she came across in her life and things he did, it was so much outside of any other animal that I was aware of. I would like to say that I learned a lot about octopuses, but it was a bit of a door opening to animals in general. As special and amazing as she seemed, you were left with this feeling like, there is hidden intelligence, meaning, and personality in all sorts of animals. She was a great surprise, but you’ve got to wonder how many other surprises there are in nature. My amazement with her was always accompanied by, what else is out there?

S&F: Now that the film is in the world, where do you hope the story will lead people?

PE: On a general level, we’ve been blown away by the way people have responded. I feel like the message has gotten through loud and clear. A lot of people have said things like, you’ve changed the way I see the natural world. Or, who would’ve thought that an octopus could be such a relatable creature? Locally, from our point of view at the Sea Change Project, which is the organization that we made the film out of, the Great African Sea Forest is an ecosystem that is hardly known. A lot of people in South Africa weren’t aware of the kelp forest either so what we’re trying to do is get this magical underwater kingdom to become a thing that exists in people’s minds, especially in South Africa.

S&F: What are you each working on now?

JR: I’m onto another project now, it’s a bit top secret so I can’t really talk about it. Hopefully we’ll do something else together in the future.

PE: There are so many more projects to come out of the kelp forest, but it also took a lot of energy to get this film where it is so we’re not going to take on something this ambitious right now. But we’ve got a smaller, short film project that we began at the beginning of this year before lockdown called the sea forest anthem, where we created a song from instruments made only from artifacts that we pulled out of the kelp forest. The whole thing got bigger and the next thing we knew Yo-Y o Ma was in Craig’s house and we played for each other and now we’ve created a song that includes him, so that’s a really fun project.

MY OCTOPUS TEACHER is available to watch on Netflix. It is written and directed by Pippa Ehrlich and James Reed.