Around the Sun Tours Festivals By Sonia Shechet Epstein | July 16, 2019

The new romantic drama AROUND THE SUN, inspired by one of the first science books for a general audience—Bernard de Fontenelle’s 1686 Conversations on the Plurality of Worlds—is making rounds at festivals around the world. The film was made on a micro-budget but was shot on location at a chateau in Normandy, just an hour from where Fontenelle’s book is set. Written by Jonathan Kiefer and directed by Oliver Krimpas, AROUND THE SUN stars Cara Theobold (DOWNTON ABBEY) and Gethin Anthony (GAME OF THRONES). On July 3, the film opened the CineGlobe festival at CERN in Switzerland. It will make its New England premiere at the Maine International Film Festival on Thursday, July 18. 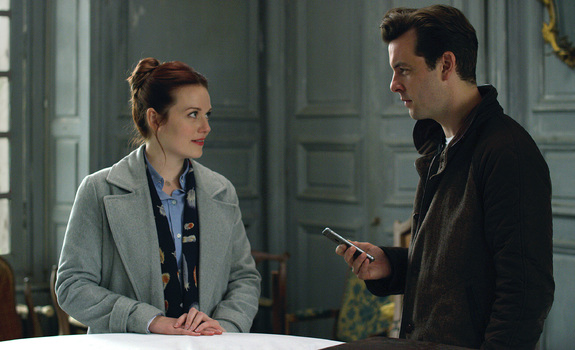 Fontenelle’s book attempts to explain the universe as understood by scientists in the 17thcentury. AROUND THE SUN’s writer Jonathan Kiefer explained to us in an interview that at the time, “the idea of the Copernican model of the world versus the Ptolemaic model of the world was controversial less than a hundred years before Conversations on the Plurality of Worlds was published. It took several generations of astronomers to figure out what it really meant. It was such a radical paradigm shift. Before Fontenelle, writings on the subject were very scholarly and I would say the average person in the 16thcentury wouldn’t necessarily absorb those ideas.”

AROUND THE SUN takes the form of Fontenelle’s book—a conversation about the universe unfolding between a man and a woman—but is set in the present. “We already know the Earth revolves around the Sun, so you can’t make a contemporary movie about figuring that out,” writer Jonathan Kiefer said. “Fontenelle, in his book, writes not just about the fact that the Earth goes around the Sun but also that other stars might have planets and other planets might have life. When you think about [the question], are we alone in the universe, that’s a macro-scale question that a lot of people think about individually too. Am I alone or can I find true companionship? AROUND THE SUN tries to articulate the parallels between the macro and micro-scale versions of that question.”

For more, read our full interview with the filmmakers.