Géza Röhrig On The Tribeca-Winning Film To Dust By Sonia Shechet Epstein | May 1, 2018

Géza Röhrig, who starred in the Oscar-winning film SON OF SAUL, co-stars with Matthew Broderick in TO DUST, a heartfelt dark comedy about the biology of decomposition which won the Audience Award at the Tribeca Film Festival. In TO DUST, directed by Shawn Snyder, Röhrig plays a Hasidic cantor who finds himself yearning to know what is happening to his recently deceased wife’s body. Going outside the bounds of his community, he finds Matthew Broderick’s character, a local biology teacher, and enlists his help. In real life, Röhrig is intimately connected with the subjects that TO DUST explores.

TO DUST made its world premiere at the Tribeca Film Festival, where it won the Audience Award and Snyder was named the Best New Narrative Director. The film received development support from the Alfred P. Sloan Foundation, beginning when Snyder won the $100,000 NYU First Feature Prize for the script, and then going on to receive production support from the Tribeca Film Institute. Emily Mortimer was on the jury that selected the film for Tribeca support, and quickly joined on as producer.

Science & Film spoke with co-star Géza Röhrig during the Festival.

Science & Film: What was your first reaction when you got the script for TO DUST?

Géza Röhrig: I met Shawn three years ago when I joined the project, which was in a fairly early stage, but the script was basically done. The main concept, directions, ideas, were there. Later, for budget purposes, it had to be shortened, but that didn’t change anything essential. I, and also my wife, were blown away by the script immediately–by the very odd and unlikely and quirky togetherness of its very different components; how a Hasidic cantor intersects with a nihilistic community college science teacher, and all that is framed by this very personal and emotional loss. I think the science component in and of itself, even as a documentary, would be quite interesting because people naturally shy away from being in the presence of a corpse. On the other hand, this is a sort of dialectic urge because we are attracted to death too; we do want to know and we do want to gaze at it. My worry was that it was so wonderfully written, the dialogue was so funny, and I was wondering if this was really going to come through. My worry was that this is an extremely hard film to make. It almost felt like this script could be simply published as a piece of literature, and I was worried if that was ever going to be achieved at that level cinematographically, and I hoped for it, and I think we did.

GR: There were two things against us: one was of course the very low budget–this is an under a million movie which makes things extremely ambitious. There were days when we shot like ten pages; the pace of the shooting was extremely fast. And the other thing was that Shawn had never made a full-length movie before. So as much as I trusted him and I like him and I call him my dear friend, you know, still, it was a big leap to pick for your first movie such a difficult one. I’m super glad that it worked and I hope I didn’t let him down.

S&F: In the film, your character searches for a language of grief, so to speak, going between science and religion. Do you see similarities or differences in what those two schools of thought have to offer?

GR: I was very glad how we tackled this issue in the film because it has really frustrated me throughout my life when people try to set up science and religion as some sort of a dichotomy. As a religious Jew I was always bored with this sort of arrogant approach, when people were saying things like: we don’t believe anything that doesn’t have hard evidence, you people can’t think for yourself, we don’t take anyone’s word for it. And of course on the religious side there is similarly very harsh despise for non-believers. So I love that the script was portraying both Albert [the community college biology professor] and Shmuel [the Hasidic cantor], two guys who are jumping out of their comfort zone, as well as their respective communities, which are conditioned against each other, generally speaking.

In my mind, from time immemorial, I always thought that this dichotomy is forced and unnatural and really what we are talking about with science versus religion is nothing else but the right side of your brain and the left side of your brain, and two human endeavors to understand our universe. It is really a division of labor. They don’t compete over the same territory; they answer two different questions. The more we understand the depths and complexity of this physical universe around and in the body, in the brain, the greater God becomes to me.

At one point Jason Begue, the co-writer of the script, and Shawn and myself were having one of the countless coffees we had in the past three years waiting for someone to pick up this movie and finance it. I was already growing my beard for the role and we didn’t even have all the money we needed together, so I was really committed. [During the coffee] there arose the question: can this story be set in another religious context, let’s say the Catholic or Amish or any other community? We came to the conclusion that it is best situated in the Jewish community simply because Judaism doesn’t have a set of dogmas and there is this open-mindedness towards science which I think is really played well in Shmuel. He’s not at all suspicious of science. Actually he’s quite curious throughout the movie about what science has to say.

I have teenage children myself and one of them is interested in science. We have these sort of arguments with each other and I always tell my son that these tools, science or religion, can end up in the wrong hands. You don’t have to look far or long to think of the Spanish Inquisition when it comes to religion or the European church under Hitler, but by the same token look at Hiroshima or the gas chambers in Auschwitz. So for bad science the solution is not no science but good science, and for bad religion the solution is not no religion but good religion. So this whole conflict is not a conflict to me because, again, they each respond to a different question. I remember someone put this quite well, saying that science takes things apart to see how they work, and religion puts things together to see what they mean. Or to phrase it differently, science tells you how it is and religion tells you how life ought to be. So they are different dimensions, one compliments the other, and you need both.

S&F: I can see what you’re saying and how that plays out in the film because your character goes between them, he doesn’t go to science as a rejection of religion. 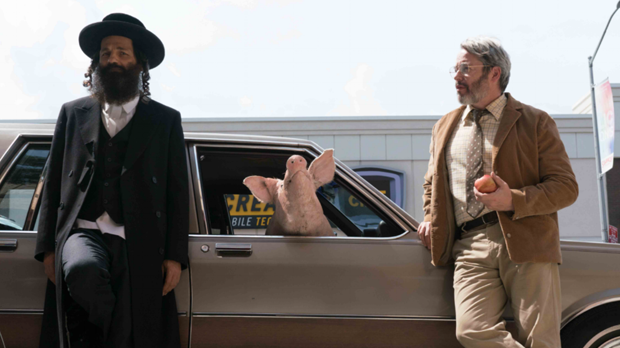 S&F: The other part of the film I want to ask you about is the physical dimension of death that is very visually present. What was your response to that part of the story?

GR: I have been, way more than average U.S. citizen, with the corporal, physical, somatic aspect of death. The reason for that is because I volunteer with the Jewish burial society, which is called Chevrah Kadisha in Hebrew, and I have been washing dead people before their funeral. I have done over a thousand by now for sure. I did that just the day before yesterday. The dead body is a subject with which people usually feel a certain terror. When you are in the presence of a deceased person it helps if you loved that person because the memories bring up warm and sweet feelings, and of course there is a tremendous bewilderment and loss as well, but the deadness of the person doesn’t affect you or freak you out in a physical sense­–your emotional trauma is incomparably more wide and deep than if you are in the presence of someone you did not know, in which case the physical, corporal, somatic aspect is the one that you feel really strange about. He is a person and talked and walked and moved his hands and feet and all of a sudden he’s a corpse and he’s entirely immobile.

When there is life there is motion. When you are seeing a corpse, the corpse is extremely vulnerable because of its immobility. So in that sense, even if the corpse is dressed up, it’s somehow naked in a deeper sense of the word. We [the living] are also very defenseless and we also feel our own powerlessness because we can’t do a damn thing about it; we can’t make him or her alive again.

S&F: That’s beautifully said. It is very refreshing and endearing how the characters in the film don’t shy away from the reality of the body.

GR: That’s why I think the title of the movie is so great. Even though we are living in the 21st century and most people do not relate to the Bible necessarily through rituals or church or synagogue going, somehow these biblical stories and words still resonate. So TO DUST is such a short but powerful image because that’s what it is really about. It all ends up in to dust, at least what happens with the body. I think the title nails it.

TO DUST was directed by Shawn Snyder, who co-wrote the script with Jason Begue. It was produced by Emily Mortimer, Alessandro Nivola, Ron Perlman, Josh Crook, and Scott Lochmus. The cinematographer was Xavi Gimenez, and Allyson Johnson was the film's editor. For more, read the interview Science & Film did with Shawn Snyder in 2015, when the film won its first prize.