Writer, director, and producer Michael Almereyda (HAMLET, EXPERIMENTER) has been making feature films since 1989. The first script he ever wrote was about inventor Nikola Tesla. In 2016, he revisited Tesla’s story and wrote a new script which won him a Fellowship from San Francisco Film Society and the Sloan Foundation. Almereyda’s new and completed feature film, MARJORIE PRIME, takes place in a near future where holograms of the dead serve as memory repositories for the living. These “Primes” learn to act human-like, “unpredictable,” the more time they spend interacting with people. MARJORIE PRIME is based on Jordan Harrison’s play of the same name; Science & Film wrote about the production at Playwrights Horizons. Lois Smith plays Marjorie, an elderly woman with dementia who is kept company by a “Prime” of her recently deceased husband, Walter, played in the film by Jon Hamm; Hamm plays Walter when he was a young man. Almereyda came to Museum of the Moving Image to speak with Science & Film about MARJORIE PRIME, which is making its world premiere at the 2017 Sundance Film Festival.

Science & Film: When I watched MARJORIE PRIME the first thing I noticed was that you made the androids holographic, whereas in the play they were people.

Michael Almereyda: In the play they were intended to be holographic–but you had to read the author’s notes to know this. Jordan [Harrison] explained that the Primes are holograms– they can’t pick things up or touch things or be touched. The stage production had trouble illustrating this [with real clarity]. But I chose to spell it out at the end of the first scene, as Marjorie casually walks through Walter Prime on her way to the couch. That was the best we could do on a low budget. 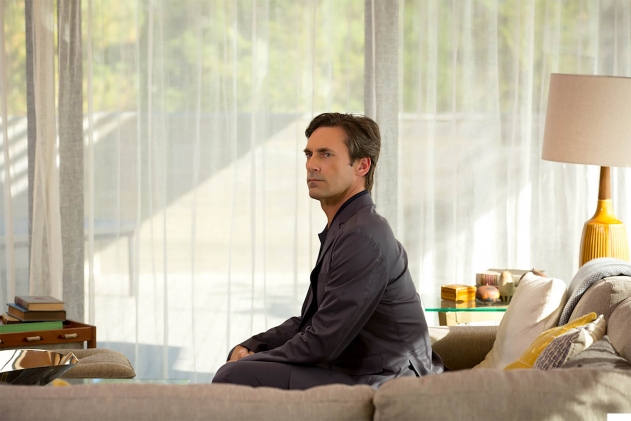 S&F: Did you look at other depictions of androids on screen?

MA: I really didn’t consider it an android movie. I’ve worked on a number of sci-fi adaptations, I’ve read Philip K. Dick, and I’m intrigued by elemental ideas about artificial intelligence. But, Jordan’s concept of the Prime is more of a conceit, I think, and MARJORIE PRIME is really about humans. Human identity. It’s about how technology can both mirror our flaws and enhance them. And about how memory is part of that exchange–how memory can get displaced and revised.

S&F: There is a scene when Marjorie’s daughter Tess (Geena Davis) and son-in-law Jon (Tim Robbins) talk about the definition of memory. Did you get that from somewhere?

MA: The characters directly reference William James’s concept that memory is always a copy of a copy and is always diminished, every time you recall something.

S&F: Every time something is remembered it can change. I used to work with Eric Kandel, the Nobel Prize-winning neuroscientist who studies memory.

MA: So William James was ahead of his time. That scene gave the characters a moment to unravel what the film is about. It might be a little too explicit–one friend said, get rid of that scene, it’s too written! He may have been right, but I felt we needed it. The scene gets the characters out of the house, it’s a respite, and it gives us a glimpse into their shared history. Also, there is a song in that scene that shows up later and becomes important. 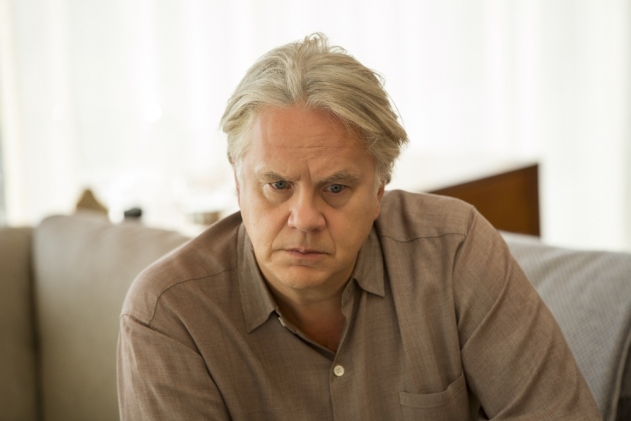 S&F: Music plays such an interesting role in the film. There is a lot of research about the relationship between music and memory. Did you look at any of it?

MA: I read Oliver Sacks’s book Musicophilia, and I made copies of essays from it for the cast. It was on my mind, as I recognized that Jordan had made Marjorie a musician; she is a concert violinist who thinks and talks about music even though her arthritis prevents her from playing. What is the current thesis you have on music and memory?

S&F: I know it is an area of active research. Music is strongly tied to emotion, and you are likely to remember emotional memories more than other memories.

MA: One particular Oliver Sacks essay described how he fell into a depression after his mother died. For weeks he felt numb, unfeeling, lifeless. Then, one day he heard music coming from a radio on a street corner, and his spirits lifted even before he recognized what it was–Schubert, music his mother had loved, music from his childhood. Images and feelings came flooding back, and he started laughing out loud.

S&F: At the end of MARJORIE PRIME, one of the holograms talks about composing music.

MA: I added that.

MA: All the way through adapting the play I was thinking: what really separates people from machines? There are certain physical aspects of intelligence that are hard to imagine a machine grasping. But since music is mathematical, if the machine had enough time to think about it, I am sure machine-made music could be pretty effective. I think Garage Band already spews stuff out; you can already get automatically generated tracks made by your laptop. Come to think of it, Brian Eno has an app called Bloom that generates beautiful atmospheric drifts of sound.

S&F: The way I read that scene in your movie was that it was the ultimate transgression, because of all this talk about robots and computers, creativity and culture are the things that separate humans from machines. For this character to then say he wanted to compose music! 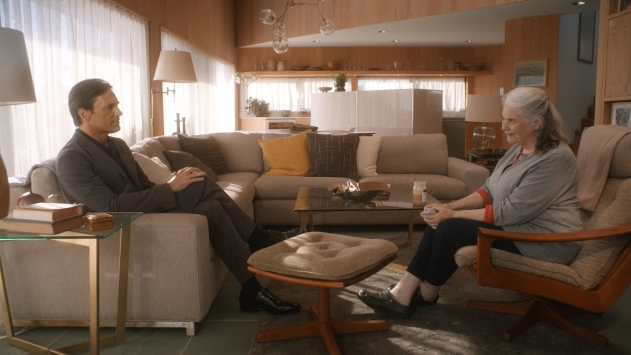 S&F: In the film, Primes are used as old-age companions and to help people deal with their grief. Did you think about it one way or the other?

MA: I inherited all this from Jordan, and I don’t think it has to be so strictly defined. Jordan had a fairly personal relationship to the idea–family history, a relative who had Alzheimer’s–and there were issues and elements of grief that he recognized as being sometimes out of reach. Jordan also cites a Ray Bradbury story, “The Electric Grandmother,” about a kindly robot grandmother who becomes, over time, younger than the children she’s designed to watch over. The idea of the Primes is similarly clever–tender and chilling at the same time.

MA: It all sparked with Lois Smith. She’s my friend, she was excited about the play, and I wanted to work with her.

S&F: Did she talk to you about the difference between doing it as a play and movie?

MA: She lived it. Jordan more or less wrote the play for her, and she of course had set convictions about her character, the story, and these pretty much corresponded to what I wanted for the movie. Of course, the movie has its own chemistry and atmosphere. It became a heavier thing than the play.

At any rate, Lois originated the play in LA, a year later we shot the movie in Amagansett, and then she rushed to New York the night we wrapped to start rehearsals for a second production of the play. So she’s performed the role three times. My editor was shocked when she saw the New York production–she said, I didn’t know it was supposed to be funny. The first half of it is almost a sitcom, it has a snappy rhythm, then Jordan does a sharp turn. The movie, for better or worse, is more sober. I hope It’s still funny, there’s humor sneaking in, though it may be too stealthy to notice.

How different did the play seem to you in terms of her performance?

S&F: I guess you can get closer in the film. You can see her face, and watching a film you are seeing the director’s perspective on the character. The camera looks down or up at her so she had a very strong physical presence.

MA: That’s the irony: you are in the theater with the actors when you’re seeing a play, but you actually get more of a sense of physicality when you’re watching a movie, watching disembodied projections. I prefer movies. Movies are actually more intimate, they bring you closer.

S&F: Did you work with Jordan on adapting the story?

MA: He was busy with ORANGE IS THE NEW BLACK–he is on the show’s writing team–so he wasn’t available, and I think we were both okay with that. I did a treatment that he signed off on; he was happy with the changes and additions, and supportive in every respect. 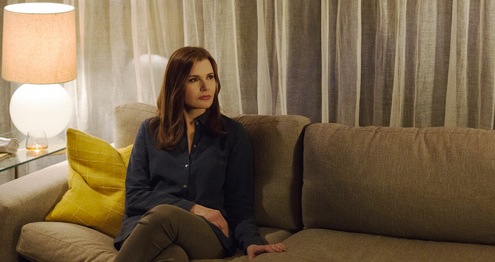 S&F: Did you read the article in The New York Times about an old age home using cats? Hasbro made cats that meow.

S&F: Minimal. They are not climbing things.

MA: Like stuffed animals. And they’re soothing to people?

MA: My mother has a dog who has been trained to be brought to people in hospitals–to curl in bed with them to be petted. It’s beyond language, it’s physical solace.

S&F: Your film is pretty different than that. If the Primes provide solace it is all about words.

MA: Right. They’re untouchable. And that is part of what is so charged about Jordan’s idea of the Primes. Maybe it’s prescient, maybe Primes are just waiting to happen. But I wonder how consoling they would really be, and the film questions that too. I added a character to the story–the granddaughter who appears near the end. She can give someone a glass of water to wash down a pill, and the hologram can’t do that. In any case, I think ultimately Jordan was addressing memory and love, how we all move through time. And he’s asking, what kind of soul might be kindled in a machine, even as human souls ebb away?

S&F: Have you thought about how the scientific community is going to respond?

MA: I’m glad you’re engaging me in this conversation, but I don’t think the film is that scientific. It’s more philosophical, I hope. Have you read a lot about memory?

S&F: Working for Eric was a pretty good education. He won the Nobel Prize for discovering that in the brain, a new nerve cell’s synapse forms when you form a new long-term memory. He studied the sea slug Aplysia, which has a simple nervous system which makes it very easy to observe change. He taught it a task and watched it learn. I want to ask you about TESLA. Congratulations on the Sloan grant.

MA: Thank you. I wrote my first Tesla script in 1980. I dropped out of college to write it. So I’ve been thinking about Tesla for a while. I’ve also seen how Tesla scholarship has evolved and deepened, darkened and brightened.

MA: Yes. I can’t share it yet. You will have to hold your breath a bit, but I’m feeling optimistic. 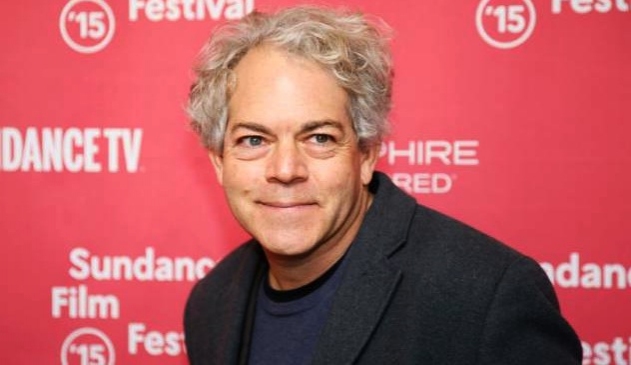