The award-winning feature film OPERATOR will be premiering at SXSW on March 12. The film is co-written and directed by Logan Kibens, and co-written Sharon Greene. Developed through multiple Sloan awards, OPERATOR received a Sundance Lab Fellowship in 2012 and in 2014 a Fast Track Grant from Film Independent which put producer Felipe Dieppa through the Fast Track program to help to get the film financed.

OPERATOR tells the story of a programmer—a User Experience designer—tasked with creating the voice of a new customer-service bot, like SIRI, or the OS (voiced by Scarlett Johansson) in HER. These bots are called Interactive Voice Responsive Systems (IVRs). The main character programs an IVR inspired by the voice of his wife which always serves to calm him down. What seems like a romantic gesture gets twisted when he develops a dependent relationship with the voice. This takes its toll on his marriage. The film has a well-known cast, it stars Martin Starr and Mae Whitman. 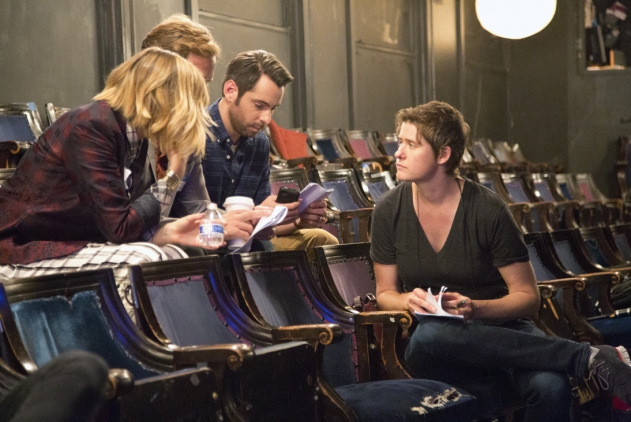 Before making the film, the filmmaking duo researched their script by going into the field interviewing programmers and IVR designers. Science & Film spoke with Logan Kibens about how the filmmakers used Sloan awards to develop the film. She explained,

“My co-writer Sharon Greene and I used a Sloan Foundation Grant to visit the Manhattan offices of Nuance, the company that designs, builds and maintains many of the IVRs in America. We were hosted by Tom Hebner, a project manager who introduced us to his whole team, from the linguists who write the language (almost all women, with PhDs in psycholinguistics), to the sound engineer who records the vocal talent, to the coders who build the machine’s response architecture line by line. Tom explained how the beginning of an IVR design process was the creation of a “personality matrix,” a simple axis in which each quadrant is assigned a personality trait that supports the client’s needs. This became an image in the film and a simple way to explain to the audience what had gone wrong with the old IVR, and what the new IVR had to get right.

And we got to know our host Tom, the optimistic salesman/spin doctor that serves as the liaison between the design team and the client. Tom became the template for the character of Gregg (Nat Faxon) in the film, the charismatic team leader who suffers a crisis of confidence after getting dumped (the real Tom is happily married). Observing Tom and his team of technologists demystified the process of making these IVRs. We learned the many simple steps that make up the design of these complex systems. The jargon of the field is woven into our dialogue and the design cycle became the structure of the screenplay. Our time at Nuance was critical to the authenticity of the film.”

OPERATOR is approaching distribution through a festival model. It will play March 12, 14, 15, and 19 at SXSW in Austin, Texas. Indiewire just named it one of seven “Hidden Gems” in the festival.