Interview with Ciro Guerra, Director of Embrace of the Serpent By Sonia Shechet Epstein | February 17, 2016

On the occasion of the 2016 Sundance-Sloan Feature Film Prize being awarded to EMBRACE OF THE SERPENT, Science & Film spoke via Skype with award-winning director Ciro Guerra from his home in Colombia. EMBRACE OF THE SERPENT is a narrative feature inspired by the true story of two German scientists who traveled the Colombian Amazon in search of a sacred plant, called the yakruna. Each scientist published a journal on which the film is based. The prize came with a $20,000 cash award. This is Guerra’s third film—his previous film, THE WIND JOURNEYS, was released in 2009. EMBRACE OF THE SERPENT is nominated for an Oscar for the Best Foreign Language film. Guerra spoke with us about the science in the film, the recent controversy it has sparked in Colombia, and what he plans to wear to the Oscars.

Science & Film: Was it a surprise to win the Sloan Prize at Sundance?

Ciro Guerra: It was a big surprise. We didn’t know that we were up for an award.

S&F: Have you seen other Sloan films? Do you see your film fitting into the oeuvre of Sloan films that have won awards?

CG: Yes, I have seen a few. I think it is great. I love the whole philosophy of the Sloan awards. Now that I see the list of films that have won I think it is a good fit. It is also funny because we had actually applied for development support with the film a few years ago. But it is very difficult to get that. So, we take the prize as a few years late but we still really appreciate it.

S&F: How will you use Sloan funds?

CG: They are going to help us in the development of a new film. We are working on a new film that we will shoot in the Guajira Desert in the northern part of Colombia. It will have some of the same team as EMBRACE OF THE SERPENT. This new film is a genre film. It is a very different film from EMBRACE OF THE SERPENT. It is in a way closer to THE WIND JOURNEYS, because the Guajira Desert is the location of the final sequences of THE WIND JOURNEYS. I just wanted to do a whole film there.

S&F: How did you end up shooting EMBRACE OF THE SERPENT in the Amazon? What led you to that location and to that story?

CG: The Amazon, for us in Colombia, is the biggest mystery. It is completely unknown to us. For me, making a film there was a life-long dream. The scientific works of the explorers that we used for the film were our guides. When I was doing research on the Amazon, I came upon the diaries and I thought there was so much similarity between what the explorers used to do—taking a leap into unknown territory, leaving everything behind, and just going into it for years—to what happens when you make a film. You are travelling into uncharted territory: you don’t know what’s going to happen, you don’t know how it’s going to come out, and you don’t know how long it’s going to take. So I strongly relate to that and also to the scientists’ hunger for knowledge, and their curiosity. I think curiosity is my main driving force. For me, curiosity is the most important thing a human being can have. 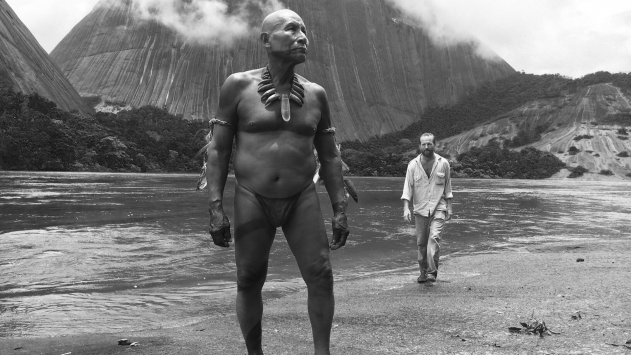 S&F: Were you relying entirely on the journals of each of the scientists, or did you do additional research for the film?

CG: After reading the journals, I did my own research. I had to compare the Amazon that was in the diaries to the Amazon of today, which is very different.

S&F: Is the yakruna plant real?

CG: The yakruna plant is a fictional creation. We were working together with the indigenous communities, especially the shamans, and they requested that we not use the real names of plants, because those things are sacred, and shouldn’t be communicated through a film.

S&F: I read about your decision to film in black and white, can you say something about that?

CG: The film was also inspired by the images—the photographic plates, almost daguerreotype images—that the explorers took. When I saw those images, they were very striking because what you see there is completely different from the Amazon that has been exposed to commerce and tourism. It is an Amazon that is completely devoid of exuberance, of exoticism, and it just feels like a different world, a different time speaking to you through those images. So, we wanted the film to capture that feeling. When I went there I realized it was not going to be possible to portray the colors of the Amazon in a way that really conveys what that means to the indigenous people. They have over 50 different words for what we call green. I decided I was going to let the audience imagine that. When you see the world in this manner, there is not this idea that nature is green and man is something else. Every person, every animal, every drop of water, every fish, everything, seems to be made of the same material—that is completely in line with the way that indigenous people see the world. There are so many reasons we did the film in black and white, it’s just not possible to give one or two answers. The film had to be that way. If I had had to do the film in color, I would have preferred not to do the film at all.

S&F: How did Oscilloscope come to distribute EMBRACE OF THE SERPENT?

CG: They saw the film in Cannes. They loved it. They made an offer, and they were also very passionate about it. I like to work with people who are passionate.

S&F: The Sloan prize will bring the film attention from a scientific audience. What has the response from the scientific community been so far?

CG: When the film was released in Colombia it sparked a big debate among the scientific and anthropological community. There were articles written about the film in specialized magazines. The debate was about the way the Amazon was portrayed, about the state of Amazonian communities today, and about the relationship between what is represented and representation. The journals of the two scientists became very popular again in Colombia.

S&F: How close did the film stay to those journals?

CG: The film should be considered a work of fiction. The journals were our starting point. But the film is also very much inspired by Amazonian myths, and the Amazonian way of understanding knowledge.

S&F: One of my favorite scenes was the scene with the compass—I thought that was a good encapsulation of one culture trying to determine one way of thinking.

CG: That’s good, because that scene was almost lost in the final cut. I fought for it and I’m glad I did.

S&F: The film is nominated for an Academy Award.

CG: Yes, it came as a big surprise.

S&F: Do you know what you’re going to wear to the ceremony?

CG: There are a lot of Colombian designers who are interested in working together.

EMBRACE OF THE SERPENT is being distributed in the US by Oscilliscope and opens in theatres February 19. The Oscars take place February 28, and will be broadcast on ABC.