A Sloan jury comprised of film industry professionals and notable scientists awarded the 2016 Sundance-Sloan Feature Film Prize to EMBRACE OF THE SERPENT, which played in the Spotlight section of the 2016 Sundance Film Festival. The jury members were: actress Kerry Bishé, director Mike Cahill, director Shane Caruth, physicist Clifford Johnson, and geneticist Ting Wu. Shane Caruth was sadly not present for deliberations. These same members participated in a panel discussion at the festival about getting the science right in films, written about on NPR by Barbara J. King. Interested in the dialogue between artists and scientists, Science & Film went behind the scenes to talk with each of the jury members over email about the selection process.

EMBRACE OF THE SERPENT portrays two cultures clashing head on. The film is inspired by the true stories of a German biologist and ethnographer who, in different decades, traveled the Colombian Amazon in search of a sacred plant believed to cure all disease. The scientist’s ordinary compass becomes a coveted object to the Amazonians representing western technology, but there is a fear that such knowledge would replace the Amazonians traditional way of navigating by stars. 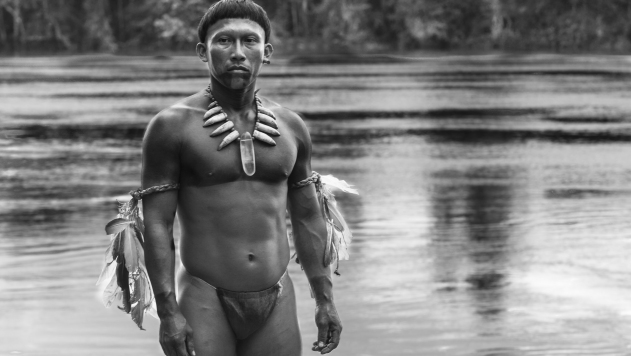 Dr. Clifford V. Johnson, a Professor of Physics in the Department of Physics and Astronomy at USC, said of the jury’s criteria:

“The main things I care about when it comes to good representations of science in film do not include (as some might expect) obsessions with every fact being correct, but rather whether the film shows people what science actually is, and what it can and can’t do: It is not a collection of facts, but a particular kind of special process that helps us navigate the world and make sense of it. The scientific process is something that we can all take part in whatever part of society we come from, so I also like filmmakers to take the opportunity to show that scientists are real people, and come in at least as many varieties as there are varieties of human being. Science is, or should be, part of the rich tapestry of human culture, and seeing it represented this way in film more often is something I want to see more of. I (and I suspect many other scientists) am tired of the narrow range of science stories or portrayal of scientists there are out there in mainstream film. That helps contribute to a poorly informed society, which is a dangerous thing. Things have gotten better in recent years, but we’ve still got a long way to go.

“Discussing EMBRACE OF THE SERPENT was an especially juicy task because it is a rich and complex story, with lots of ambiguity about what happened, and what people’s motivations were (and indeed who all the practitioners of science were). We felt that given that we’re in 2016 such stories, with ambiguity about the role and practice of science when it intersects with other aspects of human culture, are important ones to tell, and we should be mature enough as a society to be able to navigate such territory.

“Indeed, science and its connection with the rest of our lives should always make for powerful stories, and that will always involve ambiguity and uncertainty. It is an integral part of life.”

“We spent a lot of time discussing what criteria we should use when considering different films. In addition to the standards I’d apply to any work of art, it was of particular importance that the film we selected accurately portray scientists and the scientific process. There was a deep sense of respect and affection among all the jurors as well as passionate debate in our deliberations. EMBRACE OF THE SERPENT is gorgeous, and challenging, and pushes the boundary of what many might consider a ‘science’ film. It inspired much meaningful discussion about the nature of science and asked more questions than it answered. This is a quality that great art often shares with great science.”

Dr. Ting Wu, a Professor of Genetics at Harvard University, said of her experience:

“My experience as a scientist reviewing films had many parallels to sitting in my laboratory's break room talking science – intense, fast, goal-oriented but not constrained, serious, hilarious, personal, and, ultimately, satisfying.

“My decision [to award the prize to EMBRACE OF THE SERPENT] was made at the intersection of information content, capacity to convey the mind of an explorer, (which is, after all, what a scientist is), and potential to encourage good (which is, after all, one of the main drivers of science). Personally, I am also moved by films that remind audiences of the tremendous importance of, and advantages that come from, diversity – women, people of color, people of other socioeconomic levels and cultures.

“The jury deliberations were at an extremely high level, careful to balance the goals of the Sloan Foundation with those of the art and artists of film. We considered short- and long-term impacts of the films, the role of science in the storylines, and accuracy when appropriate, even reviewing specific lines to ensure that we did not miss nuances.”

“After watching a number of films, we chose EMBRACE OF THE SERPENT during an engaging two hour long breakfast deliberation. It was not the clear winner at first but rather emerged during the conversation. From a filmmaking standpoint the film is a sublime work of art. From a science perspective the film showed a meeting place between western scientific thought and the deep spiritual shamanistic tradition within the Amazon jungle. This intersection for all of its pros and cons seemed very important. We discussed science and the scientific method and the idea of collecting data, cataloging evidence and knowledge, creating models to predict outcomes, exploration, differing ways of understanding nature, differing narratives containing an internal cause and effect logic. We had a feeling that choosing EMBRACE OF THE SERPENT for the Sloan prize was a bold decision, both for opening up our ideas of what a science-themed film is and for hopefully inspiring the next great filmmakers to tell stories that showcase the excitement and moral complexity of science as art.”

Ciro Guerra’s EMBRACE OF THE SERPENT is being distributed by Oscilloscope and opens in theaters February 17, 2016. It is a nominee for the Best Foreign Language Oscar—the ceremony takes place at the end of the month. An interview with Guerra will be featured next week on Science & Film.