Is Earth II Our Best Hope?
By Britt Wray | October 13, 2022 This article was commissioned as part of the series Science on Screen: Extinction and Otherwise, to accompany a screening of the Anti-Banality Union's film EARTH II on October 23, 20222 at Museum of the Moving Image. It’s rare that I watch a film where I’m as interested in the labor that went into it as the storyline itself. That’s not to cast shade on EARTH II’s storytelling, but to marvel at The Anti-banality Union’s athletic take on editing footage from more than 200 films into a fresh synthesis of meaning. Working from some of the most expensive Hollywood films ever made about humanity’s final comeuppance, the editor’s eye is meticulously skilled at honing in on both obvious and subtle overlaps across far more narratives than the human mind can simultaneously think about – an impressive if not exhausting feat. Blockbusters carrying a certain mass market appeal in how they portray the ultimate global catastrophe, where an overly exploited Earth finally gets her sweet revenge, are strikingly coherent in the shared nightmare of social strife and inequality that they present. They are mirror neurons of our present world.

The plot of EARTH II has an arc. It begins with a combination of extreme weather events, climate breakdown, the liberation of the animal world–which abuses humans for a change–and a vague threat of AI making the conditions for human survival perilous. Then, “the event” is unleashed. The rich scramble to leave Earth for Mars, and the rest of society who can’t afford to hobnob with the elites resist the casual endorsement of their deaths with violent uprising. The police state, which serves to protect the status quo as defined by the powerful, label this swell of class war “ecoterrorism.” For the most part, the ecoterrorists are faceless and de-identified, reifying the disrespect that working class people typically receive, while creating a sense that this generalizable character could be you, me, anyone. The take-home message is that no one will be there to care for us when the world goes to hell unless we understand that we must care for each other. As James Baldwin deftly put it: “We’ve got to be as clear-headed about human beings as possible, because we are still each other’s only hope.” 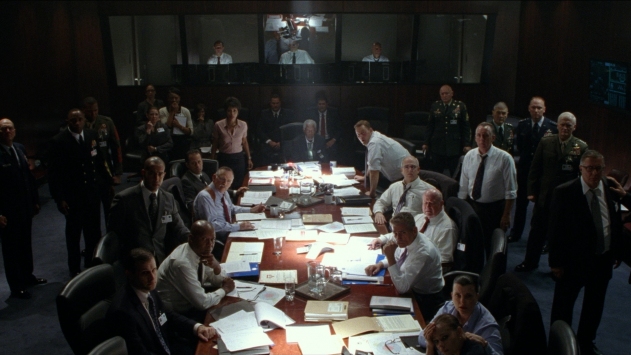 Still from EARTH II, courtesy of the filmmakers

By selecting films that star Matt Damon, Will Smith, and Keanu Reeves, EARTH II’s lead characters bring an all-American quality to the end of worlds, where the fallout is familiar and expected. These classic and popularly-loved movie stars invite us to see our future breakdown through an acceptable, “normal” lens. Matt Damon is the first human to leave Earth to set up a colony on Mars that only rich people will ever have the chance of making it to. Will Smith is on a mission to catch and kill ecoterrorists who threaten a staple of American society: the protection of comfort for the rich and powerful. Keanu Reeves is as an alien observer to all this madness, allowing the audience to see unfolding events from an outsider’s perspective. His contribution defamiliarizes us from the absurd way we repeat the same fantasy about how to deal with collective threats. The calamity always seems to play out against the backdrop of Los Angeles, as Hollywood returns to its navel in order to say something about the world.

In a time of widening income gaps, climate breakdown, and Silicon Valley’s unregulated pollution of politics and power, we watch our own dysfunction in EARTH II. Self-interested humans with the most capital stupidly look inwards to save themselves instead of probing the moment for lessons about what true planetary partnership requires. Those whose lives hang in the balance would rather die in dignity seeking to eat the rich and powerful than take the injustice lying down.

Should we be proud of the war mindset that, as Hollywood describes it, accompanies our climate anxiety? Will it help us navigate the turbulence coming our way? Is this our collective unconscious extending necessary handlebars for getting a grip on the future? Or is this evidence of how lazy we’ve become at imagining how we are going to deal with system breakdown in ways that take care of each other and stand a chance of fostering better futures? 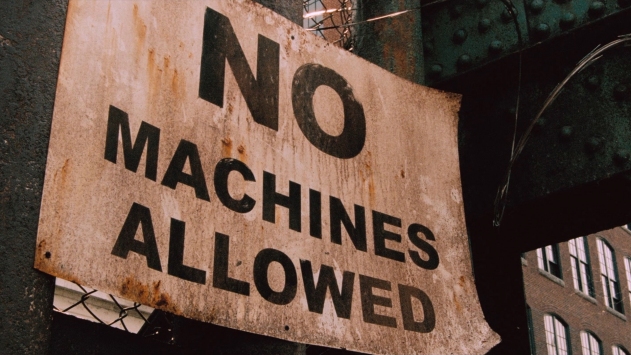 Still from EARTH II, courtesy of the filmmakers

Anyone who wishes for perpetrators to pay–especially those who have profited from our unraveling and are now planning to escape before a begging mother with a starving infant ends up on their doorstep–will like where this film goes. EARTH II offers an even bigger glimmer of hope than that satisfying dynamic. The ending leaves the viewer with crumbs of evidence for what the activist, deep ecologist, and Buddhist teacher Joanna Macy calls “the great turning” – the only thing that can counteract “the great unraveling” that we’re starting to experience. We are left with the sense that the Earth has undergone a complete transformation and that justice will be served as a mysterious traveler carrying a suitcase witnesses a Mars-bound ship blow up in the sky. The Earth he trod on looks green and healthy, suggesting either a rebirth of Earth or continuance of alien life in humanoid form on a second planet, Earth II, where intelligence still stands a chance of flourishing. Perhaps that’s the best that humanity can hope for. Should that depress or liberate us? You be the judge.