Imagine a group of late teens embarking on an 86-year space mission to a distant exoplanet without adult supervision: hormones raging, societal controls lacking, little hope of reaching the planet in their lifetime. What would happen to their social structure? Would sexual and aggressive instincts of the Freudian primordial Id take over, or would the rational part of the personality, the Ego, keep things in check? How would behavioral norms, especially concerning democracy and leadership, be affected?

These are some of the themes explored in VOYAGERS, the new Lionsgate science fiction thriller produced and directed by Neil Burger and staring Colin Farrell and a group of excellent young actors. The movie begins in 2063 when the United States, ravaged by climate change, decides to support a multigenerational colony ship to an Earth-like planet orbiting a distant star. This theme is not new. For example, in my science fiction novel The Protos Mandate, I envision a 107-year multigenerational mission to Protos, a planet orbiting the star Epsilon Eridani, where the landing party will be composed of third-generation crewmembers and a group of colony-trained individuals who have made the trip on board while in suspended animation. But VOYAGERS adds a new wrinkle: a crew of 30 artificially inseminated child progeny raised in a space simulator apart from society who presumably will be prepared psychologically for their mission. They won’t experience the melancholy of missing family members and friends or the wistfulness of absent Earth-like experiences. Together with their mentor Richard (Colin Farrell), they launch into space as pre-teens to crew the largely automated starship.

Lily-Rose Depp as ‘Sela’ in VOYAGERS. Courtesy of Lionsgate.

Ten years later, they discover that a dietary supplement, Blue, has been acting as a tranquilizer to make them docile (in order to carry out their mission) and retard their pleasure and sex drives (in order to keep the population stable so as not to overwhelm physical space and food resources). The crewmembers decide to stop taking Blue, which results in an explosion of sexual and aggressive behaviors. Like in William Golding’s 1954 novel Lord of the Flies, where societal norms break down in a group of boys isolated on an island, in VOYAGERS civilized behavior breaks down when there are no rules or adults to restrain the teenagers after the death of Richard. Furthermore, having grown up isolated from Earth society, the young crewmembers have not had time to internalize civilized values into their Superegos, so their personality ships become rudderless in a sea of primary process thinking. All they have is their ability to think logically, but it is unclear if their Egos will carry the day.

Besides these psychological issues, VOYAGERS does a nice job in highlighting a number of sociological dilemmas on an interstellar mission. There develops an intolerance of diversity within the crew over time, with a battle for leadership between two individuals representing two distinct subgroups. The need to sustainably conserve resources is played out in conflicts over food and the urgency to contain procreation. Ennui for the Earth is produced by the discovery of old family videos in Richard’s quarters. Anger is expressed by some of the crewmembers who comment that their generation had no choice in undertaking a life-long mission in space, where the colonization end-point would be fully realized not by them but by their grandchildren. Also shown are other psychological and sociological issues and conflicts that may be involved in interstellar missions, such as those described in my non-fiction book Humans in Space: The Psychological Hurdles.

For me, it was a pleasure to view a science fiction movie that takes such care to discuss big ideas and highlight important psychological themes, like those mentioned in the 1956 classic movie FORBIDDEN PLANET and the creative 2016 movie ARRIVAL. In the long-duration space mission genre, many movies show psychological and interpersonal issues affecting the crew, but they do not explore their ramifications. VOYAGERS makes time for the crewmembers to discuss the moral and ethical implications of their unexpected behavior off of the tranquilizer Blue. One crewmember states: “Which is better, to have rules and agree, or to run wild and fight?” The mob listening to her query chants in support of fighting, and she is killed for her moral integrity. Other movies dealing with crews confined in isolation on board a space ship devolve into depictions of a psychotic slasher crewmember (such as the 2007 movie SUNSHINE) or produce a murderous alien (such as the 1979 movie ALIEN). In VOYAGERS, the unrestrained psyches of the human crewmembers become the killing force, and one is reminded of the “monsters from the Id” declaration by Dr. Morbius in FORBIDDEN PLANET. Only our Ego, with the help of the societal restraint expressed in the Superego, can manage such impulses. Which force will win out in the VOYAGERS crew? Will sanity and order prevail? Will the crewmembers once again have to take Blue to survive? Will they be able to complete their mission, or might they decide to return to Earth? For the answers, see the movie! 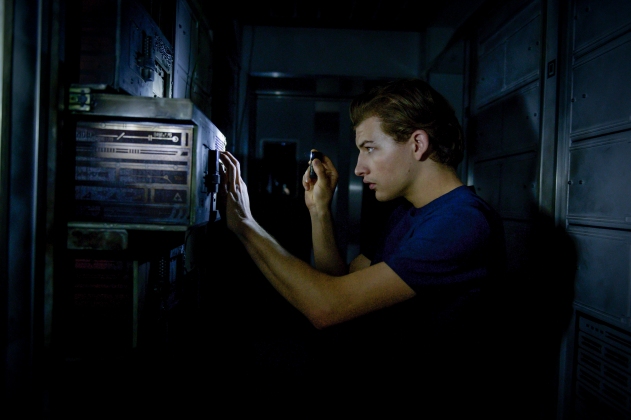 As a science fiction writer, a movie buff, and a psychiatrist who has conducted NASA-funded psychological research, I really enjoyed VOYAGERS. It clearly depicts some of the psychological and interpersonal stressors of interstellar space missions for audience members who crave ideas to ponder. At the same time, the movie creates tension and excitement for viewers who desire action and mystery. The actors are young and attractive, and their relationships are emphasized, which should appeal to both teenage and adult viewers. If your cup of tea is the thoughtful science fiction movie with much to say about the human condition in its raw state, then VOYAGERS is for you.