As most of us are now spending most of our time at home, indoors, there is more time to cook. “People Are Baking Bread Like Crazy,” a Washington Post headline in March exclaimed. The Wall Street Journal reported on April 2 sales of baking yeast increasing by 647%. In my household, we have a sourdough starter—nurtured for almost two years—and have been getting countless share requests. Watching bread rise might be akin to watching paint dry for some, but it becomes fascinating with a little information about what makes it happen. The key ingredient required to make bread rise is yeast, and that yeast can be added in two distinctive ways.

What is the difference between packaged yeast and a sourdough starter (also known as “The Mother”), and how do each of them contribute to a good loaf of bread? In 1927, the British Medical Association, together with the Massachusetts Institute of Technology and Eastman Kodak Research Laboratories, made a silent film dramatically titled MOULD AND YEAST which gets at the microbiological details of this crucial ingredient.

Mold and yeast are both members of the fungus kingdom, although they look and behave differently. Through a mix of live action, animation, and filmed microscopy, MOULD AND YEAST illustrates how mold grows and develops spores—which are to mold as seeds are to flowers. We see yeast cells bud (an asexual form of reproduction), and, eventually, yeast is added to a pillow-like dough mixture that is then set to heat and rise. (Yeast is essential to making bread to rise; the Jewish bread matzo, eaten over Passover, is flat—more similar to a cracker than a loaf of bread—because it is made without yeast.)

As the film shows, one of the first steps in baking bread is to pour a packet of yeast into a mixture of flour and water. The yeast cells’ enzymes metabolize the flour’s starches into sugars, releasing carbon dioxide and ethyl alcohol as byproducts—a process known as fermentation. The carbon dioxide forms tiny gas bubbles which increase the dough’s volume. When the dough is baking and hot, the carbon dioxide gas expands and the alcohol evaporates, causing the bread to rise. This process also adds flavor.

MOULD AND YEAST shows the use of Fleischmann’s packaged yeast—most likely the yeast species Saccharomyces cerevisiae. The first packaged yeast to be widely sold was Charles and Max Fleischmann’s yeast cakes. Fleischmann & Co. took out a number of patents on yeast over a century ago. In 1870, they patented a solid yeast and distributed it to visitors at the Philadelphia Centennial Exposition in 1876. (The Fleischmanns also founded a distilling company to produce gin, alcohol that is fermented by the same species of yeast bacteria as is used in baking bread which is added to a mix of grains and sometimes fruits.) Fleischmann’s Active Dry Yeast remains stocked on shelves today. 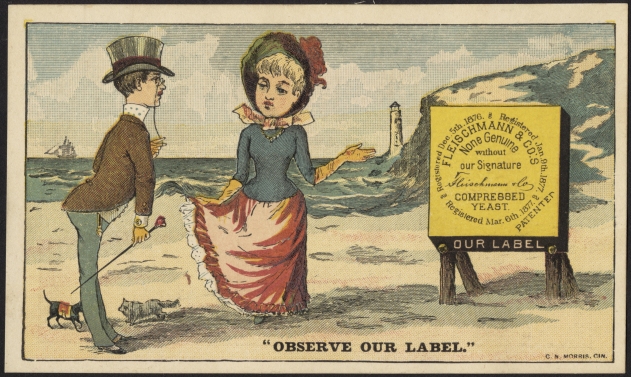 In contrast to packaged yeast, a sourdough starter contains its own wild yeast strain, or strains, and baking with it renders packaged yeast unnecessary. A starter is made from a mixture of flour and water that is given time to ferment and become a stable mixture. Flour naturally contains yeast spores, and when a starter begins to bubble, it is a sign that the wild yeast strain (or strains as the case may be) is growing. Many sourdough starters host a range of yeast species, such as S. exiguous and Hansenula anomala. The exact composition of yeast strains in a starter varies by environment.

Many of us feel anxiety and cabin fever, cooped inside while the novel coronavirus threatens lives around the world, so tending to a sourdough starter is one small way to feel more in control, as well as more in touch with growth, change, and the passage of time. Moreover, as a 1928 Flesichmann’s Yeast advertisement rightly claims, “there is something so self-satisfying in turning out from the flour, water, yeast, etc., the tempting brown-crusted loaves with creamy, flaky inside.” 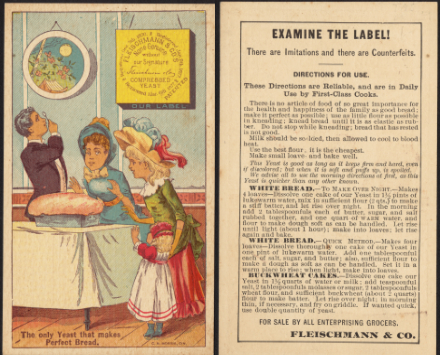 For those who would like to transform their kitchen into a bit of a science laboratory, the Exploratorium has a lesson plan for a fun activity that demonstrates just how gaseous yeast can be. Try it out here and send us a picture at sloanfilm@movingimage.us!