THOSE THAT, AT A DISTANCE, RESEMBLE ANOTHER, the debut feature-length documentary by artist Jessica Sarah Rinland, considers replicas and reconstructions. Rinland filmed in institutions around the world—from the University of Sao Paolo, to the Natural History Museum in London, to the furniture restoration department at the Victoria and Albert Museum. The film is experimental, experienced through a series of close shots and a rich soundscape—hands with perfectly painted red nails laboriously reconstruct an elephant tusk, or repair a jewelry box using confiscated ivory. Rinland both observes and creates conditions to comment on the perpetual process of conservation.

THOSE THAT, AT A DISTANCE, RESEMBLE ANOTHER made its world premiere at Locarno and played in the Wavelengths section of the Toronto International Film Festival, which features “daring, visionary, and autonomous voices. Film art in the cinema and beyond.” We sat down with Rinland to discuss her film in Toronto after the premiere.

Science & Film: How did this project begin?

Jessica Rinland: A friend of mine was working as a technician at the Victoria and Albert Museum. He was working on installations and once told me that he overheard someone talking about a cupboard filled with ivory. He joked, you like big mammals, you’re probably going to like the tusks. And I was like, what? Why do they have a cupboard filled with ivory at the V&A? It turned out to be [in the care of] this guy named Nigel Bamforth, who is the head of furniture conservation at the V&A. My friend Tom put me directly in touch with Nigel, who is super generous and open. It’s quite a sensitive matter, the ivory, so it was over three years that I talked with him; I’d ask to record our conversations and then to take photographs and eventually I was like, can I film you restoring a box that’s using the cupboard filled with ivory? That ivory turned out to be ivory that is confiscated by customs—it’s brought into the country, confiscated, and donated to national museums.

S&F: Do they donate ivory for the express purpose of it being used for restoration?

JR: Yeah. Then, at the British Museum, they were doing a cleaning of the whale skeletons that they had installed on the ceiling. I have a friend who works there and we were talking about the project and she was like, you have to meet Mike Nielson, who is the in-house facsimile technician. He is a really wonderful person, loves talking about his work, about the history of facsimiles in London, and showed me what he’s up to. 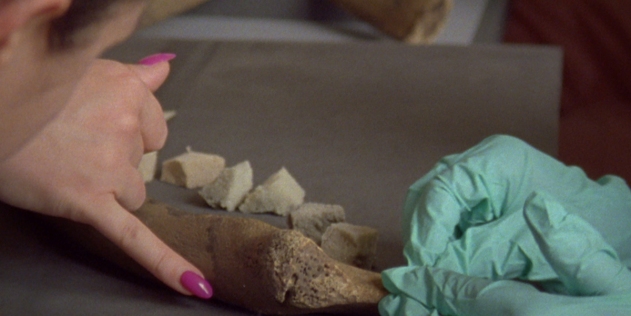 S&F: Was it ever difficult getting access to the various institutions in which you filmed?

JR: The way that I made the film was mostly through people I already knew, and by meeting their friends or their colleagues. I worked for the Natural History Museum in London for about six years with the curator of mammals, Richard Sabin. It is still a continual [part of] my practice. I was working with whales and when it came to this project I was talking to him about the ideas that I had, and he was like, well you could definitely use a tusk from the collections here. As it says at the end of the film, the [replicated] tusk has been donated back to the Natural History Museum. I have a very close relationship with Richard, who is a big fan of the arts and is an incredible person to speak to, and very generous and smart.

S&F: You also filmed in Brazil, how did that come about?

JR: I was studying at MIT with a fellowship in the film studies center at Harvard, and I took a class in pre-Columbian Amazonian history in the Anthropology Department where the archeologist was doing a swap with the Sao Paolo University. His name is Eduardo Neves, he’s a top archeologist who came to Harvard for a year to teach. We became very good friends, and he said, come to Brazil for the summer. So I applied for funding and I went and traveled across the country going to different museums. I came across ceramicists who had a long history of making copies.

S&F: In the film you ask one of the conservators to purposefully break the replicated tusk, why was that?

JR: I think the whole process is quite absurd and satirical in a way—the process of making a tusk in ceramic and going through the process of 3D printing… and the fact that I asked the conservator who is the person who is very uncomfortable with breaking something to break it. I, in a way, was embodying the conservator. I had ideas of burying the tusk to have it deteriorate the ceramic, but ceramic is as durable as ivory itself. So I thought it was more fun to have him break it and then fix it.

S&F: Why do you think the whole process is absurd?

JR: This kind of human condition having to continue conserving, it’s never-ending. It’s always this fight against death, constantly, even by procreating, let alone by conserving objects. I think there is something inherently absurd about that.

Also, the majority of people I was encountering working in conservation were women and quite a few of them just coincidentally had their nails painted. So there was this embodiment of the conservator by having learning how to use my hands like they were using them—they were fake nails.

S&F: It seems like that would be a big impediment to that sort of detailed work. [laughs] 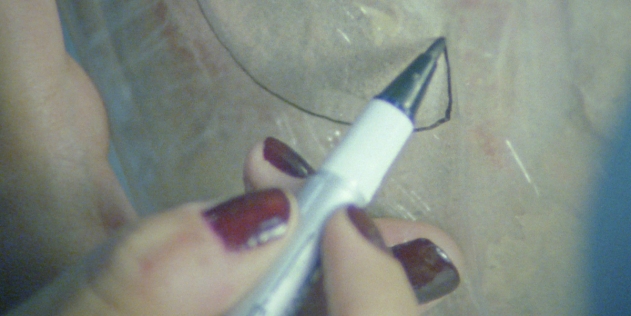 S&F: When I saw the painted nails I thought of ASMR. The whole film is sort of in that style…

JR: Yeah, yeah that was just a review in Cinemascope and they spoke about that.

S&F: Was that intentional?

JR: No, absolutely not. I’ve been doing this ten years, it’s not something that I ever equated to ASMR. I was at the film studies center when I was making the film and taking classes with Lucien Castaing-Taylor. I showed cuts of the film people did sometimes bring that up and I was like, that’s not what I’m doing. What I’m doing is the same as you looking at the close-up of an image. To me, it’s like it’s a close up of a sound.

The reason that I started making film was Jonas Mekas, and then I got really obsessed with one filmmaker named Mary Field who worked a lot with Percy Smith. They worked together, but since she’s a woman [chuckles] no one really…I spent a lot of time in the BFI archive watching her work. She actually comes from education rather than coming from film. She and Percy Smith wrote a book called Secrets of Nature together. The way she talks about filming animals in zoos, and the reactions of animals to cameras and things like that is really wonderful. But then it’s also like a how-to of how to make educational films. There is a chapter on sound and editing. In the sound part they talk about voiceover and the importance of it having to be a male voiceover—the authority of a male voice.

I thought everyone was going to bring up Camille Henrot’s film GROSSE FATIGUE. No one has brought that up.

S&F: Was that an inspiration?

All images courtesy of TIFF