BACURAU, the Brazilian, political revenge film and Winner of the Grand Jury Prize at the 2019 Cannes Film Festival, made its North American premiere at the Toronto International Film Festival where we sat down with co-writers and co-directors Juliano Dornelles (O ATELIÊ DA RUA DO BRUM) and Kleber Mendonça Filho (NEIGHBOURING SOUNDS). Set in an unspecified time in the near future, BACURAU juxtaposes the inhabitants of the titular village in the Sertão region of Brazil with a group of white foreigners who are there to kill them for sport. It stars Sonia Braga, Udo Kier, Bárbara Colen, and Thomas Aquino. The film is currently in theaters in Brazil, will screen at this year’s New York Film Festival in the Main Slate, and is set to open in the U.S. in January 2020.

Science & Film: There is a tension in the film between old and new technology. For example, there are psychotropic drugs and vaccines, and there is the machete taken from the wall of the museum and machine guns. I’m curious if you were interested in exploring those contrasting technologies, or how that figured into developing the story?

Kleber Mendonça Filho: That’s a great point of view. In fact, we haven’t come across it put that way in the four months we have been trave ling with the film.

Juliano Dornelles: We had a need to make a very strong difference between the foreigners, the invaders, and the people from Bacurau. One challenge for us was to talk to the art department and costume designer about how many years from now [to set the film]. We didn’t know.

JD: Yeah but we didn’t actually have this precise information. You talked about the machete. All the guns in Bacurau are in the museum, on the wall. They are pieces of history.

KMF: This is something that people in Brazil have been reacting to, the way we portray the Sertão region. It’s unprecedented in many ways. During the editing process I saw Walter Salles’s CENTRAL STATION, the 4K restoration. He shot the film in the Sertão in 1997 which means that it was a pre-internet era. It looked very much [like it could have been] in the ’80s, ’70s, and ’60s. Today, technology has taken over the Sertão and made it look very modern with cheap, China-made products. We were really interested in mixing old and new.

JD: One important fact about a few years ago during the Lula years [Luiz Inácio Lula da Silva, President of Brazil 2003-2010]: the poor people started to have more money and the quality lowered a bit so they started to buy stuff—televisions, computers…

KMF: We never stop to explain [in the film], but there are water tanks in front of houses. These are icons of the Lula years because he had this project to build [water storage tanks].

JD: You can see it very casually in BACURAU the moment the bikers arrive—there is a lady putting the hose in it.

KMF: I was in a screening in the northeast of Brazil and when one of these things appeared on the screen very casually I heard somebody say that was Lula who did that. It became an icon of those years. It’s a very simple piece of technology which helps people store water in a region where sometimes—like where we chose the location—it hadn’t rained for seven years. Then we started pre-production and it was the longest rain period in seven years. It changed the scenery, the landscape.

JD: There is a saying in Brazilian cinema, if you want to make it rain somewhere, just open your tripod [laughs].

KMF: The priest in the town where production happened had a mass on a Sunday morning and he thanked the film crew for bringing rain. 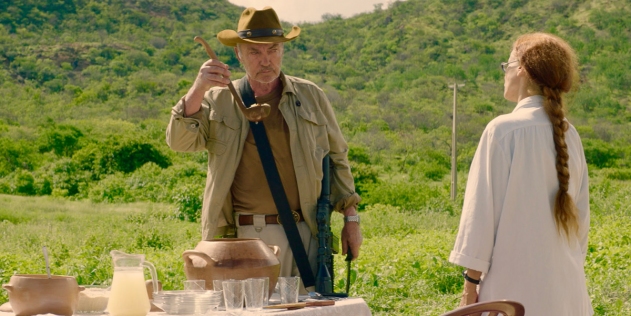 JD: But it was very good for us because with this climate changing after one day of rain, the landscape changed completely. It became green, very green. Nature became very powerful—little animals running, butterflies having sex, and birds. So this was a gift for us because we had this moment of nature flourishing.

JD: It increased the tension of water [access]. It’s not lack of water, but people forbidding us to have our water. It is a person’s decision. So it makes the subject of the water stronger.

S&F: The film is set a few years in the future, you don’t specify exactly when, but the village of Bacuaru doesn’t appear to be too far in the future. Is there any specific way you wanted to present the town so that it would seem futuristic?

JD: Not particularly. I think that the situation, this absurd situation, of people going there to hunt people is futuristic.

KMF: It’s really a question of semantics. There is a very disturbing moment, I don’t think it’s subtitled, when Terry is in a house and a TV is on and it says public executions restart at 2pm. That’s futuristic.

JD: In the public square in São Paolo, a very well known place.

KMF: We do not have public executions scheduled. 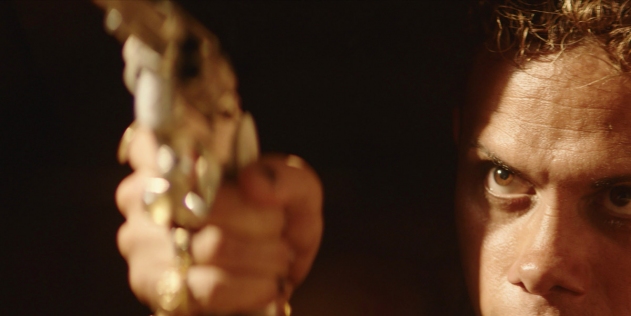 KMF: But we do have public executions which happen when you least expect: somebody dies or is shot, or five black friends go out at night in a car and 111 bullets hit the car from the police with machine guns. So incidents like that happen disturbingly frequently, but not officiallyscheduled executions. That is the difference between a dystopian, science-fiction film and reality. However, it’s so close that it’s really disturbing.

S&F: One of the first movesthe hunters make against the town is to jam the electric signals.

JD: Yes, that’s power. But first they took Bacuaru off the map.

KMF: For me, that’s the most powerful demonstration of political power in the whole film. It’s stronger than shooting somebody in the head. It can be done. In fact, in March we were in post-production in Paris and there was a piece of news in the Brazilian press about the new extreme right wing government which decided to delete the indigenous protected areas from the grid. These are areas that are protected for a reason, to protect indigenous people.

JD: And the forest! And now, we have this.

KMF: That was the beginning of what is happening now. When they do this, they send a message to the farmers—

JD: It’s okay to do whatever you want.

KMF: They are fascists. Now you can just burn the whole place because you need to be productive. Now this is happening, and the whole world is like, really?

JD: And you see Udo Kier’s character say in that business meeting, a shithole town that no one will care about. It’s a term that we took from Donald Trump: “shithole.”

S&F: There is a powerful scene when the teacher can’t find Bacurau on the map so he pulls down a paper map to show the kids.

KMF: And the kids look very disappointed. They ask, do we have to pay to be on the map?

JD: It’s a line that everybody remembers. That and, what do you call people born in Bacurau? People. [laughs]. You go on Twitter, the Brazilians are crazy with those very strong lines.

BACURAU was written and directed by Kleber Mendonça Filho and Juliano Dornelles. It is produced by Emilie Lesclaux, Saïd Ben Saïd, and Michel Merkt. It is being distributed in the U.S. by Kino Lorber, and is set to open in theater in January 2020.

All images courtesy of TIFF.