In a world in which climate is changing at a rate and scale that has never before been seen, humankind does not have many options for survival left. Some look to each other for hope, and some look to the stars. Both preferences are explored in James Gray’s epic AD ASTRA. The film is set at an indeterminate time in the near future. Brad Pitt stars as U.S. astronaut Roy McBride who has the experience, psychological profile, and remarkable ability to keep his heart rate beneath 80 bpm, that qualify him to undertake a mission to save mankind. This hero’s journey takes him further into the solar system than anyone, save his father (Tommy Lee Jones), has gone before.

James Gray, who directed and co-wrote AD ASTRA with Ethan Gross, consulted with a number of scientists on the scientific accuracy of the film. NASA aerospace engineer Robert Yowell worked with Gray beginning in 2017 on the production and screenplay. We spoke with Yowell by phone about the experience on September 18. In addition to AD ASTRA, Yowell consulted on Noah Hawley’s film LUCY IN THE SKY, which stars Natalie Portman, and the upcoming television series THE RIGHT STUFF.

AD ASTRA will be released into theaters by Twentieth Century Fox on September 20, and will also be in IMAX.

Science & Film: How did you get involved in AD ASTRA?

Robert Yowell: It was April of 2017, and the interesting thing is the way I was found which is a story in and of itself.

I was volunteering as a docent on weekends for the space shuttle Endeavor, which is at the California Science Center, because of my prior work with NASA on the shuttle program. I was there on a Sunday talking to guests and this woman came up to me. She had obviously been listening for a while and kind of interrupted my tour to say, I really need to talk to you, I’m working on a movie. I’m thinking, okay, everybody says that in LA. Eventually we started talking and she says, I can’t tell you a lot but it’s going to be a big movie. I really need your help designing the interior of the spacecraft, making sure all of the switches are labeled properly, are functional, and I can explain what each switch does. Can you help me with that? I said, sure, possibly… So she invites me to the production office.

I have a real job; I work for the Air Force in LA, so I showed up there [at the production office] in Sherman Oaks at like six o’clock at night and spent three hours there. It was not just the art department, but the props people, the director, and the producer who were asking me questions about everything from: what does it sound like the in space station? Or, what would it look like if there were plants growing? How should the lunar rover and its control panel look? They asked if we could make a deal, and I said that I just needed to get permission from the Air Force but it shouldn’t be a problem—and that’s what happened. I ended up not just working on art direction. I got the script, and I made suggestions to the director. James Gray was very focused on realism so he kept saying, let me know what I can do to make this more real.

I wasn’t the only technical consultant, by the way. You’ll probably see in the credits there were almost a dozen people, but I think I spent the most time out of all those folks because I was probably working on it for six months, through the end of 2017. I ended up being on set when Brad [Pitt] did his takeoff from the moon and the landing on Mars. There are parts of those scenes that I contributed to.

It was just being in the right place at the right time, and now here I am now working on my third project. I’m working on a TV series, and last year I worked on a Natalie Portman film, LUCY IN THE SKY.

S&F: Who were the main people who you worked with on AD ASTRA?

RY: Mostly the art department and James himself. I was literally sitting next to him during many of the shoots that I was talking about—during the liftoff from the moon and landing on Mars I had headphones on and was listening to the dialogue. James would turn around and say: Is that right? Does that look right? What should we do here? So I would make suggestions. What Brad’s saying when he has to take over from the guy who is panicking…

S&F: AD ASTRA is set at an unspecified time in the future when there is commercial travel to the moon and the U.S. has a hub on Mars. Were you thinking of any date in particular when it might be set?

RY: I would say roughly forty or fifty years in the future, something like that. But I could also say the opposite. I think this is what James was after. The way it’s shot, there is a retro feel that is kind of on purpose. Many people would look at that spacecraft and say, wait a minute, why don’t you have a computer doing all this? But my argument there is, look at the U.S. Air Force today: we are still flying B52 bombers—the pilot’s great grandfather flew it in the ’50s. If you have something that is reliable and it works, then don’t fool with it. That’s part of theory behind some of what you see in the spacecraft depicted.

S&F: Did you talk at all with James Gray about Brad Pitt’s character’s trip to the moon? I thought that was a really convincing vision of what a commercialized trip might look like.

RY: That was already in the script when I came onboard. Ethan Gross was the other writer on this. He and James had done a good job of putting that all together.

RY: I saw it on a regular-sized screen last week, and I’m looking forward to seeing it in IMAX this weekend.

S&F: Was there anything you were surprised about in the final cut?

RY: Yeah. What pleasantly surprised me, because I didn’t expect to see it depicted so well, are the micro-gravity scenes where they’re floating and you see the little glob of water. That looks so cool. I think the only other film that really shows that is APOLLO 13. When they made that movie 25 years ago, they actually had to use the NASA airplane that flew zero gravity and do all those shoots in 30-second intervals with the actors, which was a hugely complicated thing. The technology we have with CGI and everything else, you can do wonders now onscreen.

Beyond that, [I loved] the visuals of all the planets including Neptune. JPL [NASA’s Jet Propulsion Laboratory] provided a lot of those visuals for the film. It’s remarkable, the artistic way that it was shot.

S&F: What do you like about working on films?

RY: It’s amazing to see the huge team of people it takes to put this together. It’s probably equivalent to the teams of people it takes to put someone in space. It’s two hours on the screen but behind those two hours, my gosh, it is a lot of work. But it’s impressive that everyone works together as a team. All the films and television series I have worked on have that level of teamwork.

S&F: So it reminds you of your experience collaborating with other people in the sciences?

RY: Yeah, it reminded me of the way NASA works or the Air Force, exactly—common mission, common goal. And it’s satisfying to see the finished product. What I’m working on now, the TV series, is very historical and that’s really a treat for me because I am kind of a space historian on the side, if you will. To see that come to life onscreen in ways that it has never been done before will be remarkable. 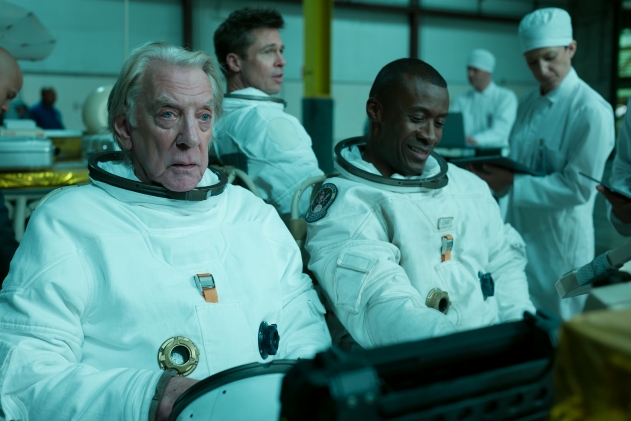 S&F: Having worked on AD ASTRA and these other projects, I’m curious what your feelings are about accuracy in science films. Do you feel that accuracy is important, and if so why?

RY: I think it’s important because movies are a tremendous medium. They reach a huge population of the planet. I think AD ASTRA is going to be in one hundred countries or something—just think about how many people that can reach. Not even NASA has that access. [It] gets people of all ages engaged and interested—especially younger people who aspire to work in those fields someday. That’s why it’s important; it is an inspiration.

So many movies inspired me and here I am [laughing]. You’ll find many astronauts and many engineers who’ll say the same thing about 2001: A SPACE ODYSSEY or APOLLO 13. Some are based more on facts than others. That is what makes AD ASTRA different. James Gray, unlike perhaps other directors of films like this, had a very strong commitment to realism.

S&F: Do you make any distinction between films such as 2001 that are more speculative, versus those that are more historical, for the purpose of getting people interested in space?

RY: It’s all necessary because you’ve got to have things that are going to propose the future, hopefully in an optimistic light. It’s very important to be speculative. Look at Stanley Kubrick. 2001: A SPACE ODYSSETY was shot in 1966 and he basically predicted the iPad. That’s incredible! That is exactly what you see in the film when Bowman and the other astronaut are sitting on the Discovery and they’re watching news on the BBC. It’s an iPad. To spark Steve Jobs’ mind, which I think you can argue it probably did—that’s why we have an iPad today. Before movies it was books, like Jules Verne, that stimulated real engineers and real scientist to come up with the inventions and the discoveries that they eventually did.

Robert Yowell is a 30-year veteran of the Space program. He began in 1989 as an engineer at NASA’s Johnson Space Center, and currently leads a team developing advanced space satellite projects for the US Air Force at the Los Angeles Air Force Base.