Eddie Redmayne and Felicity Jones reunite after the Steven Hawking biopic THE THEORY OF EVERYTHING to ascend into the atmosphere in THE AERONAUTS, Tom Harper’s new film that premiered at Telluride and had its Canadian Premiere at the Toronto International Film Festival. Inspired by the 2013 book Falling Upwards: How We Took To The Air by historian Richard Holmes, the story follows James Glaisher, pioneer of meteorology, on a record-breaking flight 37,000 feet high in 1862.

The flight, which took new measurements in temperature and humidity, ultimately advanced the field such that meteorologists could scientifically predict the weather. In real-life, Glashier’s co-pilot was Henry Coxwell, but in the film his role is morphed into Felicity Jones’s character Amelia Wren. Director Tom Harper said at the film’s Toronto premiere, “I was really struck by their [the scientists’] taste for adventure and the extreme risks they were going to [in order] to expand knowledge of the world.”

We sat down with producers David Hoberman and Todd Lieberman in Toronto at the Intercontinental Hotel. Their other films include THE FIGHTER, BEAUTY AND THE BEAST, and INSURGENT.

Science & Film: What drew each of you to this project?

Todd Lieberman: Part of it was science, the idea of doing a real-time adventure. The real flight happened on September 5—two days ago in 1862—so 157 years ago. It lasted 91 minutes. So when Tom Harper pitched that he was working on a real-time adventure of an 1862 hydrogen-filled balloon, it was fascinating [thinking about] how to visually represent that.

There are going to be two people in a basket, how do you make that cinematic and visually tell the dangers and excitement and wonder and discovery of that adventure? That was a thrilling proposition. Tom Harper, who directed the film, had directed WAR AND PEACE, this miniseries that I thought was phenomenal, so to put that person’s eye on this story was thrilling.

David Hoberman: I think in first reading [the script], knowing that you were going to be able to create the whole environment that they were going to be in, would be beautiful and something no one had ever done before.

TL: They weren’t travelling in a hot air balloon. You can navigate hot air balloons through the use of the flame to go higher or lower. This was literally a massive birthday balloon. Except in those days it was hydrogen—we use helium. So you have no idea where it’s going to go. It’s silent and goes where the wind goes. 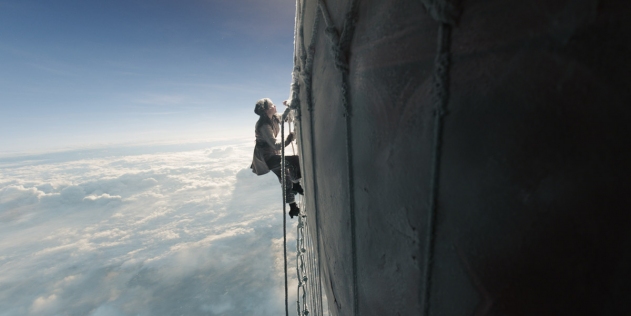 DH: I also love the idea of telling an epic story in a confined environment. How do you do that? That’s something that has always appealed to me. I’ve tried many times in my career to do a story like that and this one does it.

S&F: To what extent does the film hew to facts?

TL: Most of what you see in the film actually happened, just on various flights not all on one flight. James Glaisher did the research to allow for the very first meteorological predictions, and obviously that’s apropos when you look around at what’s going on today with massive hurricanes—we’re in the middle of a pretty big news story right now with one. He was named head of the newly formed meteorological society a few years after this flight.

[Another instance that made this flight historic is] when Amelia throws the dog out [of the balloon] for the purpose of show, that led to what eventually happened in World War II when parachuting dogs were used to sniff out bombing areas.

S&F: How does this film compare to other films that you’ve produced?

TL: What we endeavored to do here was to make a thrilling, exciting, authentic experience. The idea was, you the viewer are with those two in the balloon and experiencing it as they experienced it. So the physics of it, the way it worked, the surroundings, the butterflies, all those things are well-researched or actually happened at one point. I don’t think there is another film we’ve done that deals with science in that way, but real-life stories that we’ve done like THE FIGHTER, STRONGER, or stories that we’ve done that deal with real-life situations like WONDER, those are all heavily researched, and I think this was similarly heavily researched in the way that the science is accurate to either what actually happened in other flights…

DH: I think that’s all part of filmmaking. Even BEAUTY AND THE BEAST was heavily researched—the architecture, the town. I think that’s our obligation, that even when you’re doing a fantasy that it’s based in reality.

S&F: I mean it doesn’t have to be. But it sounds like it’s important to you.

TL: We’ve also done some comedies that aren’t very heavily researched [laughs]. But some people will watch this movie and say, wow, would they really be able to survive in those temperatures? And the answer is yes, because that is the exact temperature that was recorded when they did the flight and survived.

DH: Some people look at the film and think, no way that could have happened.

S&F: Some filmmakers who are making science-based films embrace the real science as a creative constraint in terms of the filmmaking. It can make the film more dramatic.

TL: We manipulated some of the background for effect. Did that flower look exactly… I don’t know! Probably not. Did they definitely go 37,000 feet? They probably did because the equipment stopped working at 35,000 and when they got to the ground all the readings suggested that it was 37,000 feet. When Amelia Wren [Felicity Jones’s character] lands and drags on the ground like that, people are like wow, is it possible that someone could survive that? Most deaths on these balloon flights happened on landing. We are absolutely not constrained by but are cognizant of and very specific about the science.

S&F: Did you work with science advisors?

TL: We had actually something that we didn’t even know existed, called a balloon expert, a guy named Colin Prescot. Colin Prescot ended up finding us a gentlemen named Per Lindstrand who built the mammoth balloon for us to exact specifications. It was 80 feet high, it was gigantic. Per is the person who flew with Richard Branson in their attempt to fly around the world.

S&F: I’m sure they were psyched to see this project come to life!

TL: Beyond. Because what they were saying was, you don’t build these kinds of balloons now. This is the first balloon of its type that’s been built in probably 30 years. The science of how to fly a hydrogen-filled, or in this case a helium-filled balloon is really about ballast. We had a group of people Colin Prescot put together who were phenomenal who were a rogue group people who like flying gas-filled balloons. One grain of sand could be the difference between a lift off and being grounded, that’s how specific they get. These guys were really into it and it was fun watching them do it.

S&F: Where is the balloon now?

TL: It’s folded up somewhere. We’ve been trying to get Amazon Studios to blow it up somewhere and take it around. It’s so unbelievably impressive.

TL: No. However, we made sure every person who worked on the film went up in a balloon. In [most] cases it was a hot air balloon, just to get a sense of what it felt like.

DH: Chicken shit! You didn’t do it?

DH: The way we do our movies, one of us takes a movie and sees it through. As you can tell, he’s the one who was predominant on this movie.

TL: The gas ends up costing an extraordinary amount of money. To blow it up with helium cost like $30,000. So we were really utilizing those flights efficiently whereas the hot air balloon cost like $2,000. So everybody flew in a hot air balloon and only Eddie and Felicity flew in the gas balloon.

S&F: How did you find your balloon expert?

TL: Someone on staff found a company called Flying Pictures and a job called “balloon expert” and we found the guy who lives in the UK where we shot the movie.

S&F: Is there anything you’ve heard from audiences so far that has been surprising?

DH: Everybody walks away being surprised by what they just saw. As a filmmaker, it’s great to have people walk out having gotten a lot more than they bargained for. The two things they walk away with are the beauty and scope of the film, and the performances of Eddie and Felicity. I remember at the premiere at Telluride everyone was just frozen. Once it takes off—literally—people are just glued to it and invested in it.

TL: When my wife saw the movie early on, she said how important she thought it was for the sake of inspiring young girls and women into the world of science. Amelia Wren’s character, while a composite of various pilots of the time, feels like a great role model.

S&F: Yeah. When I was little I was obsessed with Amelia Earhart. She was similarly a trailblazer.

TL: This character was obviously partly named after her. One of the interesting anecdotes that I didn’t find out until Telluride, speaking of Amelia Earhart: Ted Hope who runs production at Amazon—who was the champion of this from the very beginning—his wife’s great grandmother funded Amelia Earhart’s trip. It was a real connection.

DH: I also think THE AERONAUTS is the opposite of a Disney fairytale: the woman saves the man and goes to great heights and lengths to do so.

Directed by Tom Harper, THE AERONAUTS stars Eddie Redmayne, Felicity Jones, Tom Courtenay, and Himesh Patel. It is written by Jack Thorne. It will be released into theaters by Amazon Studios on December 6, and be available for streaming on December 20.