Director Liza Mandelup On Jawline By Sonia Shechet Epstein | May 7, 2019

Winner of the Special Jury Award at the 2019 Sundance Film Festival, Liza Mandelup’s new documentary JAWLINE probes the fantasy and reality of internet fame and fandom. For much of the film, 16-year-old Austyn Tester is the center of the frame. Feeling stuck in his small hometown in Tennessee and with limited financial resouces, JAWLINE follows Austyn’s decision to try to become famous via internet platforms including YouTube, SoMe, and Instagram. JAWLINE made its international premiere at CPH:DOX in Copenhagen on March 25, and we sat down with Mandelup afterwards. The film has been picked up for distribution by Hulu where it will premiere this year.

Science & Film: The central topic of this film has something to do with fame. While there are a few moments in the film where the subjects reference the fact that they are being recorded, for the most part you and this film are not a part of this story in a particularly obvious way. But I couldn't help but think, as we're following this guy in Tennessee in relative obscurity, about the fact that he's also the subject of this documentary. How did the documentary contribute to his sense of having a future as a celebrity?

Liza Mandelup: You know what's really interesting about that? When Austyn was going through a hard time his mom would always say, well, y’all are still here. When he was having a hard time getting famous, we were there making the film. Documentary doesn't go away when the other things go away. So I developed a closeness with the family because of that and became part of their lives. Austyn has highs and lows and his career has highs and lows and the industry that he's in has highs and lows, but [his family would say] you guys, you stay and tell the whole story.

S&F: As they are used to being.

LM: As they are used to being. They didn't necessarily see the value in creating my film. We live in a time where everybody feels like, I'm telling my story. I'm on Instagram. But once we could share how powerful documentary can be, that's when I got Austyn; I was able to say, this is going to be different than the stuff you do. It’s going to have a different impact, a different method. When I get there with someone, I’m like, now we’re collaborating. So, that was cool.

But also, something you were saying earlier was about how in films when they acknowledge that there is a camera there, but my whole thing with the style is that I feel like the camera is like another person hanging out in the scene. It’s not an interview where they're always talking to me. It's more like, you're there and your presence is acknowledged. The camera becomes another person in the room, and I guess that’s the definition of verité. 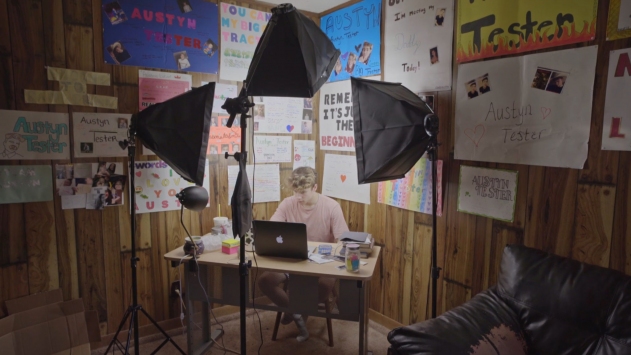 S&F: I would imagine that perhaps Austyn and your other subjects were more comfortable being themselves, so to speak, with you in the room than other subjects that you have filmed in the past, just because of how comfortable they are in general with the camera. Did you find that to be true?

Liza: Yeah. I definitely have an interest in fantasies and desires for fame. So I think that I’m attracted to those kind of people that think that they have… I don't know. I actually kind of like it when there are other cameras in the room. I love that two cameras can capture something so different. I think that is something positive to think about at a time when there's so much content out there; everything is about perspective. You can always tell a new story with a new perspective on something that maybe has been documented before.

S&F: You said that you’re interested in people who are seeking fame, and I'm curious if you came to making this film out of any sort of critique of internet culture?

LM: No. The film actually came about because I wanted to tell a story about what it's like to feel like a teenager in love, today. I explore that in a more abstract way. The actual idea of the film came from me being like, I want to take that emotion of what it is it like to be a teenager in love and express it with the backdrop of technology. What do those emotions feel like when there is so much screen time? And how is that impacting what reality is versus online self? Teens now are developing their identity online and in person. It's not the same. So in the film, there are a lot of scenes where online is one way and in person is another way. Because to figure out what it's like to be a teenager today you have to figure out who you are on the both ends.

S&F: The scene in which Austyn broadcasts that he’s going to a mall I found particularly interesting related to what you're saying. One of the girls starts getting upset and aggressive, and those are obviously intense emotions that are being felt both by Austyn and his fans. But how are those expectations met in person?

LM: That's exactly what I mean. What you just explained is the concept of “meet and greets.” A “meet and greet” is when the influencer has an organized time and place to meet the fans. But that moment when the girl finally gets to have that in person interaction versus the online interaction, that's exactly what you're saying: that’s the moment that they’re realizing how it’s different. So there's a lot of that in the film.

S&F: I really felt for him because it seemed like he had to uphold this presence. It’s one thing when the screen frames you and you’re the center of everyone’s world…

LM: It’s about your face, about the jawline.

S&F: How did you find Austyn?

LM: I had been following some of the “meet and greet“ tours. I shot for about a year before I met Austyn. I was going on tour shooting and casting. I was meeting people, filming with them, and figuring out the structure of the film. I had been basically pitching around that I was looking for someone who we could be with the day he decides he wants to drop everything and give everything he's got to getting famous off of live broadcasting. Someone saw Austyn on YouNow he had like no followers, he just had a great personality. We met him—and this was after meeting a lot of people—and I believed in him too. He also had unique circumstances in coming from a town where not a lot of people get out. And so I thought there would be a good story there.

S&F: I wonder if you could say a little more about how teenagers these days have to develop their personality or themselves online and off at the same time?

LM: I think that when in high school, people are figuring out who they are but they're also met with a lot of resistance to being themselves; a lot of bullying, a lot of being told what you're not, and I think that makes you question who you are. So you want to go to a community that accepts you. People now are finding communities online that accept them, and then they become the person that they want to be online. But they still need to sort out who they are. I interviewed hundreds and hundreds of girls, and I never got sick of trying to understand that. I was always like, why are you here? Why are you in this meet and greet? Why are you following them so much? I wanted to understand, what are you looking for? And I also really related to it, because I was a teenage girl too.

S&F: I never really thought about who those girls were who were out there, and then in the film someone says that it’s not the girls who are cheerleaders, but rather those who are bullied.

LM: They are capitalizing on teenage girls’ insecurities.

S&f: Did you think about following a female influencer?

LM: There is no reverse because the boys are selling companionship to these girls. I think that there's a market for that, because it is a window in a girl’s life where she wants to feel loved but doesn’t necessarily get it. The guys in school aren’t great or maybe the girls are needing more support at home. They say that in the film, “we provide support.” What is support? It's emotional support. I just didn't experience it in reverse. There is no market in reverse because it’s teenage girls’ insecurities, and guys aren't the same.

S&F: Lastly, I'm just curious about the filmmaking. When you use the live broadcast footage that originated online, how did you deal with that in terms of film quality?

LM: My curiosity was about what happens before and after livestreaming, and also what happens in between screens. That’s something I thought about a lot. I'm always thinking about making everything feel as beautiful and cinematic and narrative as possible. But, when we actually just watched the live broadcasts they were too good, you know? [laughs] Austyn is great. It’s a skill to be able to talk like that.

JAWLINE was directed by Liza Mandelup, produced by Bert Hamelinck, Sacha Ben Harroche, and Hannah Reyer, filmed by Noah Collier, and edited by Alex O’Flinn. It will premire on Hulu in 2019.